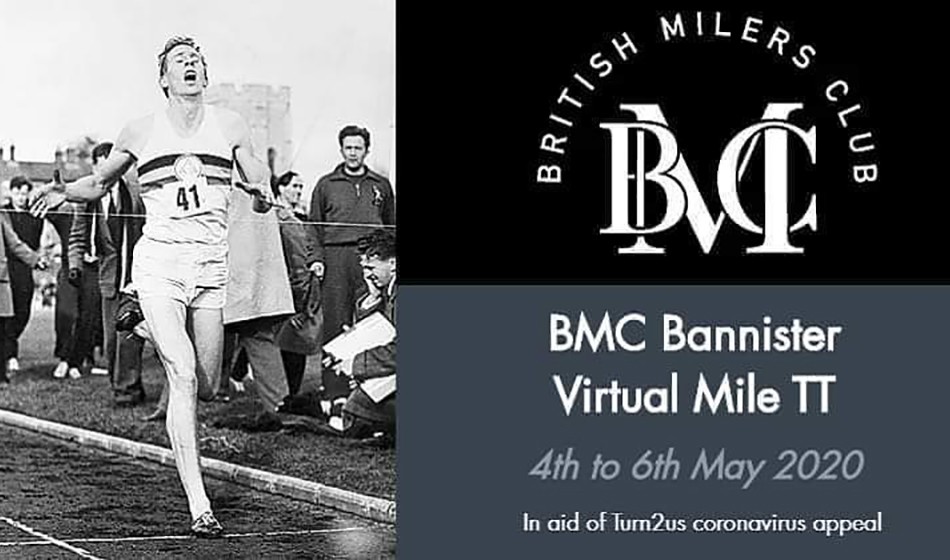 As a way to keep BMC activity going, and also raise some money for charity, the Bannister Virtual Miles will be held across three days, from May 4 to the actual sub-four anniversary day of May 6.

Athletes can now enter for free at data.opentrack.run/x/2020/GBR/bmcmile

“Whilst respecting Government guidelines on social distancing and exercise restrictions, the club is responding in a creative way to the absence of competition for our athletes,” says BMC chair Tim Brennan.

The club is keen to become a productive force for the collective social good. Event organisers Stephen Green and Matt Long add: “We are looking for participants to make a voluntary contribution to a nominated charity helping people during the pandemic so that athletes can not only benchmark their training but play a role in enhancing the social good during a global crisis.”

The club’s chosen charity is Turn2Us, which provides pragmatic support to assist those who are struggling financially. They have launched a coronavirus appeal to help those affected during these difficult times. The charity was founded by Elizabeth Finn during the Victorian era way back in 1897 to combat poverty in an industrial age. In a post-industrial world, the charity retains its relevance as it is estimated that more than 14 million people are living in poverty, including 3.5 million children. In light of the current COVID-19 pandemic, evidence is suggesting that it is the poor who are suffering the disproportionate impact of lockdown, which makes the work of the charity so relevant to the current crisis.

Donations can be made at justgiving.com/fundraising/british-milers

The club adds: “Would you listen to Frank Horwill’s words and ‘keep going’ with the British Milers’ Club in raising money for the social good during a time of global crisis? Let’s exercise social responsibility in celebrating the legacy of Sir Roger Bannister’s first four-minute mile by entering the Bannister Virtual Mile time trials between May 4-6.”

The BMC would like to thank a number of people for their support in organising this event, including Matt de Freitas, James Thie, Mark Hookway, James McCrae, Jonny Currie and Britta Sendlhofer.