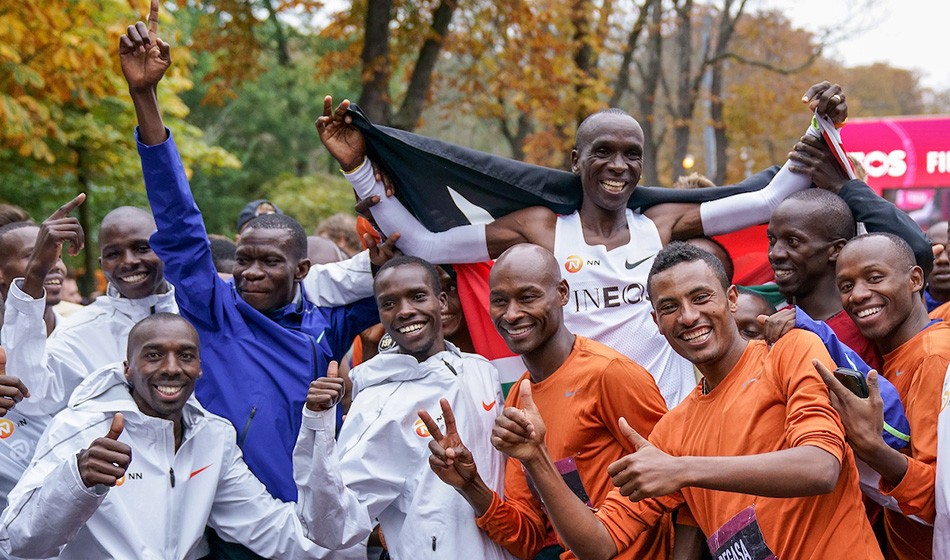 From Eliud Kipchoge’s oatmeal breakfast to spectators stealing banners after the event to take as souvenirs, AW’s editor looks back on a monumental morning in Vienna

Moments after Eliud Kipchoge smashed the two-hour barrier for the marathon, spectators helped dismantle the course by snaffling the ‘INEOS 1:59 Challenge’ banners that lined the route in Vienna. They realised they had been part of history and wanted a bit of it to keep.

Starting on the Reichsbrücke bridge before passing through the Hauptallee road that cuts through the Prater park on the banks of the Danube, the organisers INEOS spent close to $20 million on the infrastructure and road improvements. Kipchoge arrived in the Austrian capital with raw talent and years of hard work in the bank, whereas INEOS built the stage for him to perform – and it proved a winning combination.

The crowds played their part as well and no one will begrudge them taking home a few keepsakes. Certainly around the finish area the spectators were several rows deep and cheered and roared and thumped the fabric on the course fencing every time Kipchoge and his peloton of pacemakers sped past.

Not only did it result in a stunning time of 1:59:40, but it looked beautiful with the lead car shining a green laser on the ground in front of a group who were working in synchrony to form an aerodynamically efficient V-shape ahead of the zen-like Kipchoge. This was athletics at its aesthetic best as they glided at metronomic pace through an avenue of trees glistening with autumn leaves. 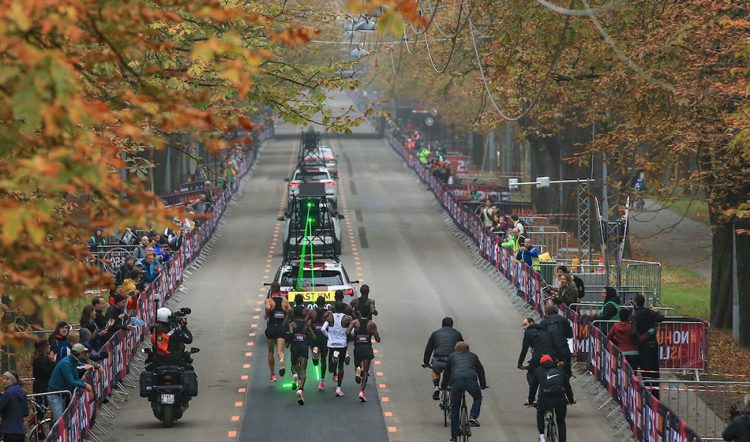 Even the weather gods smiled, with temperatures of 9C at the start rising to 11C mid-race and barely any wind. Indeed, as Kipchoge rose at just before 5am to tuck into his oatmeal breakfast, the park was covered in mist with a crisp chill in the air, although by the time the race started at 8.15am this cleared to reveal grey leaden skies.

The first kilometre was slightly inside the necessary 2:50 pace needed for a sub-two-hour marathon. But this was due to the slightly downhill section of the bridge before the runners approached the large roundabout by the Praterstern railway station and the entrance to the park itself.

Covering the race was different to a standard marathon. Usually there are changes of position or splits to note, but in Vienna on Saturday the pace barely changed due to the pacer car setting a precise sub-two-hour pace of 4:34 per mile. Many regular running reporters were also at the Bank of American Chicago Marathon to watch Mo Farah defend his title, although the INEOS 1:59 Challenge’s temporary yet sizeable media centre just metres from the finish line in Vienna was still full – and there is no doubt the event in Vienna will dominate the world’s news this weekend.

Kipchoge did not look troubled either during his run and post-event speculation has included the question of just how much faster can he go? About one hour after Kipchoge finished Jos Hermens, head of the athlete’s management agency, Global Sports Communication, told AW that the target was to break two hours, though. Attempting to run any quicker, he explained, would have been risky.

A former world record-holder himself in the 1970s, Hermens says a sub-two-hour marathon would have been considered impossible when he was an athlete. “No, not ever, not at all. It would have even been unimaginable 20 years ago,” he added. 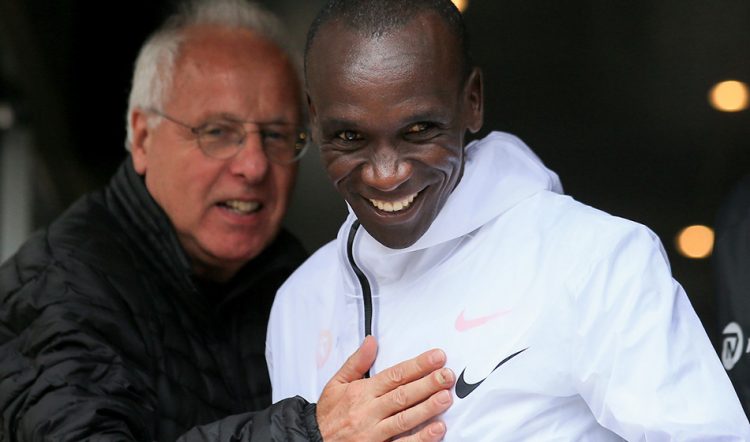 Hermens says the impossible dream began to become a reality in 2008, however, when Haile Gebrselassie took the official record down to 2:03:59 in Berlin. “Then in 2014 we launched the Sub-2hr Project with Yannis Pitsiladis in Newcastle,” Hermens remembers.

With bigger funds, Nike took over the race for the sub-two-hour marathon and staged the Breaking2 attempt in Monza in 2017. There, Kipchoge ran 2:00:25 – a performance that gave him the belief he could break the barrier at a future date. Naturally, improving the official world record to 2:01:39 in Berlin last year did not hurt his confidence either.

In April this year Sir Dave Brailsford was taken on board to help coordinate the sports science and environmental factors surrounding Kipchoge’s run in Vienna. The man who has made a name for himself by creating world-beating cyclists by using a ‘marginal gains’ theory, has been employed by INEOS to help bring Kipchoge’s sub-two bid over the line.

Much has been said about Kipchoge’s shoes. The Nike Vaporfly models appear to have revolutionised marathon running performances and the Kenyan was wearing a new version in Vienna which does not go on sale until next year. Not much is yet known about them but they are believed to contain several carbon plates which help propel a runner down the road and aid their efficiency.

The main reason Kipchoge’s run will not count as an official record, however, is due to the phalanx of pacemakers who dropped in and out of the action to help him reach his goal. From the police cars that sped through to make sure the road was clear seconds before Kipchoge and his pacers appeared, right through to the rotating pacemakers, this marathon at times resembled the Tour de France in its style and execution.

One of the best-known pacemakers, Bernard Lagat, told AW that “it could not have happened to a nicer and more hard working guy”. The former world 1500m and 5000m champion added that he grew up in a nearby village to Kipchoge in Kenya, attended the same church and was taught by the marathoner’s mother at school before he moved to study in the United States. “We were not so much his pacemakers today as his friends,” he explained. “So this is an extra special moment for us.”

Patrick Sang, Kipchoge’s long-time coach, added: “He has inspired all of us to stretch out limits and to do more than we think we can do. I said to him, ‘Congrats, you have done it, you have made history’.”

Just as proud was Sir Jim Ratcliffe, the INEOS founder, who must have had sleepless nights given all the expense and preparation with worries over whether Kipchoge would succumb to illness or injury close to the event. Yet not only did he turn up healthy, but in what Ratcliffe called “superhuman” form.

“Yes I’m quite happy,” Ratcliffe smiled with deliberate understatement. “I could see that Eliud believed that he could do it. I’m an amateur runner and sometimes I have a good run and sometimes I have a bad one and you don’t really know why it is. There are no guarantees in sport. He could have had a bad day but he just happened to have a good day!” 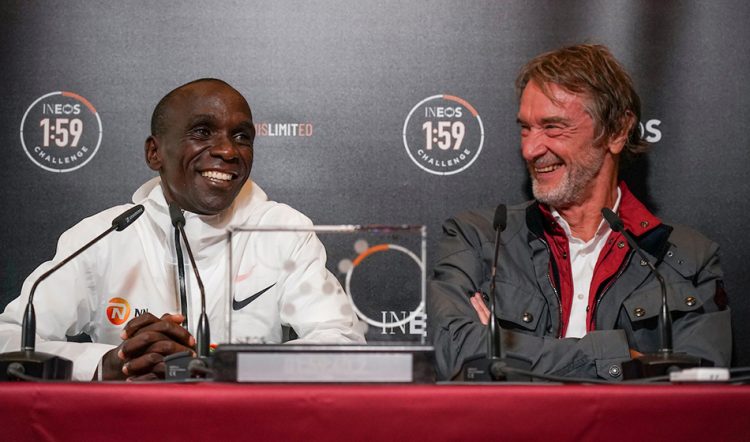 Ratcliffe added: “I will never forget that last 30 seconds. He broke free from the group and the car and then accelerated and didn’t look like his feet were touching the ground and his face was so calm and tranquil but my face would have been tortured.”

Not everyone was enamoured by Kipchoge’s exploits. Critics have described it as a ‘pantomime’ and ‘not real athletics’. They have poured scorn on the use of rotating pacemakers, the solo time trial element and shoes that offer a distinct advantage. Some have suggested they would rather have seen him slugging it out in the heat of Doha for a world title this month instead, or racing in a big city marathon in Berlin, Chicago or New York City.

It is a contentious issue and boils down to personal taste and matters of opinion. One thing that should be remembered, though, is that the use of pacemakers was equally controversial when Sir Roger Bannister ran the first sub-four-minute mile 65 years ago. He was famously helped by Chris Chataway and Chris Brasher at Oxford’s Iffley Road on May 6 in 1954 – a strategy that was very much frowned upon at the time. 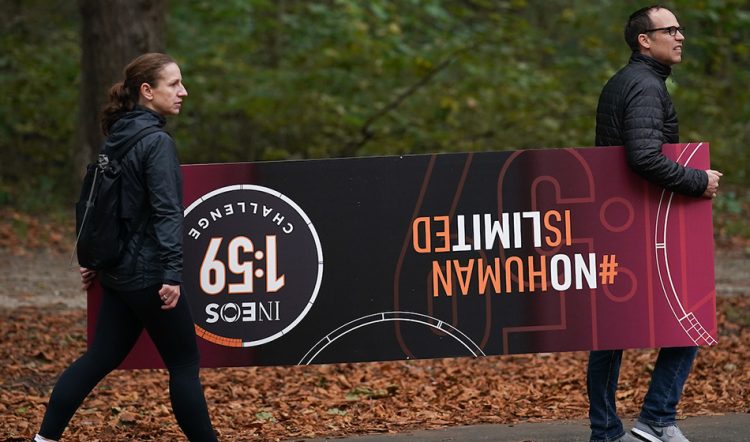 Shoes and pacers aside, Kipchoge still had to run 26.2 miles considerably faster than any man who has ever lived. Just as Bannister still had to clock inside 4:00 for the mile – a feat that was considered ‘impossible’ at the time.

A remarkable athlete, Kipchoge has only lost one of his 12 marathons – in Berlin in 2013 when he was beaten by Wilson Kipsang in a world record time – and his victories include the Olympic marathon title in 2016 and the Virgin Money London Marathon four times in the last five years. A rare talent, in 2003 he won the world cross-country junior men’s race before out-sprinting world mile record-holder Hicham El Guerrouj and world 5000m and 10,000m record-holder Kenenisa Bekele to the world 5000m gold in Paris in the same year while still aged only 18.

As he reaches the twilight of his brilliant career, Kipchoge says nothing tops breaking two hours, though. “It was the best moment in my life with 500m to go and it was the time to break history,” he said after his Viennese whirl through the city on Saturday morning. “I had a lot of pressure before the event. I had calls from people like the president of Kenya. When you get a lot of calls from high-profile people like that, it’s a lot of pressure!”

Kipchoge added: “I was really calm and followed the instructions and what the pacemakers were doing. All throughout my mind I was thinking of running under two hours. It was not 50/50. It was 90%.

“Everyone was glued to the TV today, to YouTube, Facebook pages and Twitter. Sport is the way we can unify people and sell a positive message to the world.”

Now the two-hour barrier has been breached, will others follow? “For sure, I believe so,” Kipchoge smiled.