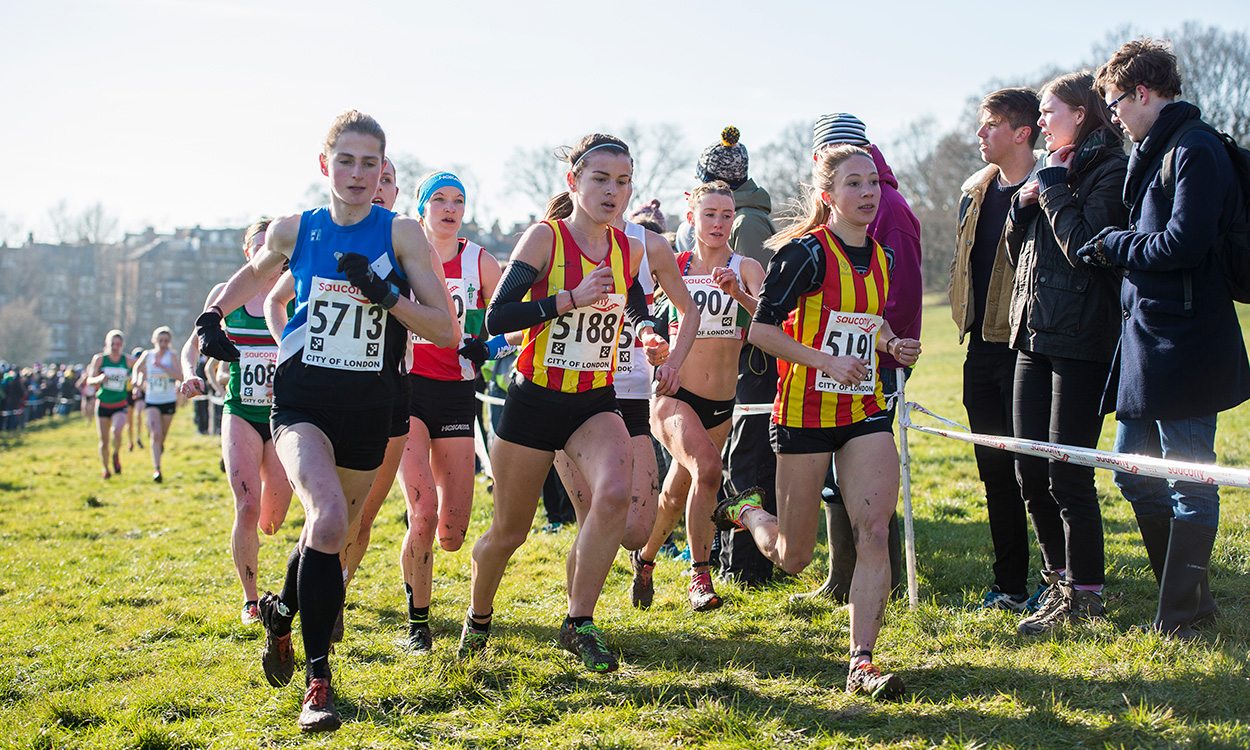 The debate around equalising the distances for men and women in cross country was raised again recently when the English Cross Country Association (ECCA) published results of its survey into the issue.

Out of 244 questioned at the English National at Parliament Hill in February, 47.9% (of which 50.4% were female and 49.6% were male) replied “yes” to the question “Do you think that senior men and senior women should run the same distance at the National Cross Country Championships”. Those that replied “no” totalled 52.1% (of which 66.9% female and 33.1% male).

All this was in response to an online petition campaigning for equality started in January by London runner Maud Hodson. It has so far gained more than 2500 signatories after quickly garnering much attention from the press and leading personalities in the running world.

Former world cross-country champion Paula Radcliffe entered the debate on Twitter, writing: “Distances are guidelines. If the course is an excellent XC course & 8.63km or 9.13km, both are ok. It’s about the racing and the nature of the course. Some will suit some more than others – that’s cross country. Men and women can race the same course.”

In a separate earlier post, Radcliffe questioned why the focus was on female runners moving up in distance, putting forward the argument instead that men could come down in how far they go instead.

“Cross country isn’t actually about the distance, it’s about quality racing over cross country,” she added. “Cross country has enough issues we need to work on without getting sidetracked. And why not change men’s to women’s distance if obsessed with ‘equality’?

“For cross country 8km is a better distance, better races, brings more athletes together and more interesting to watch. Why assume that what men do is the best option?”

So why are the distances different at most levels in the first place? Is it simply down to tradition or are significant competition considerations at stake?

While distances in the IAAF World Cross Country Championships became equal in the 2017 edition, European Athletics (EAA) has decided to retain the status quo and the distances for its continental championships in Samorin in December were 10.18km for men and 8.23km for women.

This was in response to a 2016 poll of member federations in which 21 of the 37 respondents (out of 51 countries) said they thought the distances should remain the same.

Toralf Nilsson, chairman of the EAA event and competition commission, told AW in light of the petition: “It doesn’t mean it will stay that way forever. It is only about time. I’m open to take this discussion again. I can’t really see that we have had a great demand from any members since this survey.”

Organisers of the British Athletics Cross Challenge, where the distances are in line with that typical in Britain – around 10km for men and 6km for women – have said they are looking into making things equal, although nothing final has been decided.

Scotland, on the other hand, went equal in 2017 and there are suggestions it has been a success, with Ian Beattie, chairman of Scottish Athletics, citing “no complaints”.

However, women’s entries at the Scottish Championships went up by only four to 382 when the distance increased to 10km last year – perhaps disappointing when women’s and overall participation is on the rise anyway and when this compares to 330 in 2015.

To an extent, regional, national and international policies would have to be synchronised in order to prevent drop-off from one level to another.

At all levels, female entry levels are much lower than for males. Last year’s National Cross had 788 senior women and 1763 senior men. Would clubs struggle to turn out teams if the distances for women went up?

Will Cockerell, Belgrave Harriers women’s team manager, is in no doubt on this. He said: “The South of the Thames Cross Country Association has pioneered women running the same as the men, and the men’s participation levels drop off by 1.5% when their races rise from 8km to 12km. For the women, the drop-off rate is 17.2%. Even the rise in distance in the Surrey League from 6km to 8km after Christmas sees a drop-off rate of 12.4%.”

He added: “In my years of managing the successful Belgrave women (top six at the National three years in a row), I did hear on occasion that they’d like to go further, but I heard five-fold far more that they couldn’t run due to the distance being too far – and this was at either 6km or 8km.”

Of course, Cockerell is not referring to what women can run. They can run just as far as men of course and, indeed, the performance gap closes the longer the distance. It’s about what the current crop want to run and how it fits into their development.

It’s about what distances are best for under-17 and under-20 women, where there is a huge rate of drop-out from the sport, and then making sure the step up in distance at senior level doesn’t seem too big a rise.

The argument has been made that distances are the same for men and women on the track. However, cross country is very different as, at most championships and events, either gender has only one distance option – as opposed to choosing from 5000m and 10,000m.

In speaking to representatives from three clubs and one domestic league, I did not gauge a strong belief that equalisation would be detrimental.

The main concern of Brian Fox, women’s team manager at Swansea Harriers, was that it could adversely affect older masters runners, who sometimes run with the women these days. “We’ve always said that most women would be glad and were capable of running those (longer) distances,” he said.

Dawn Lock, secretary of the Mid Lancs Cross Country League, said: “I think the lesser distances are fine for women, but there are women who are very strong and would have preferred longer.”

Conversely, Cockerell believes: “If we went down this route, participation levels in female club cross-country would decline between 15-20% and the championships would become far more onerous and complex to run and place an intolerable strain on our volunteers, who are rapidly depreciating in number.”

Former European cross-country champion Jon Brown told AW: “The distance needs to be determined in a way that delivers the best possible race scenario rather than any equality reasoning. Of course, there’s no reason why women can’t physiologically run 10km or 12km cross-country, but I have no objection to asking the question of what would make the races the best possible distance for the good of the event. The women’s 8km distance has never put any of the top endurance women at a disadvantage, I believe.”

The results of the ECCA survey shows opinion remains split and it’s a debate which could rumble on a while yet.