Alleviating anxiety with the Alexander Technique 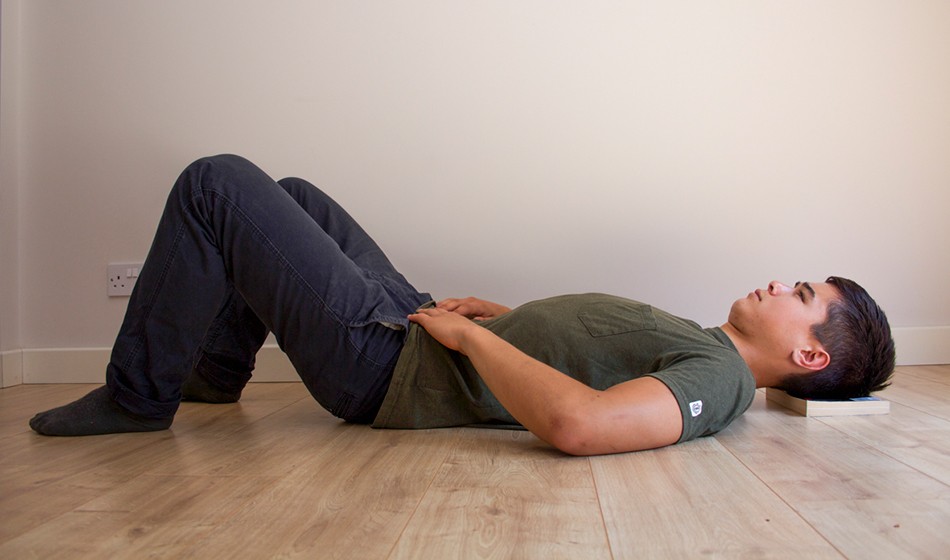 It is not surprising that so many of us are feeling anxious at the moment. The Covid-19 pandemic threat to life is real and it stirs the human imagination, though often not in a good way, while there is a great deal of uncertainty for athletes when it comes to training and the resumption of competition.

Because it is well established that any type of constant, low-grade stress is harmful to our health and immune systems, experts have been quick to offer advice to those who are feeling tense, uncertain or fearful.

But I have yet to read anything about the advantages of Alexander Technique-style lying down – that is, lying on the floor with the back of your head supported by one or two paperback books, knees bent upwards, and feet positioned about shoulder-width apart (pictured, above).

Because of his background in anatomy and physiology, Dart reflected deeply on his Alexander lessons, especially the contrast between the absolute stability of lying on the floor and the relative instability of standing fully upright. He also pondered the unique capacity of at least some members of our species to twist, turn, or jump, while maintaining symmetry and spinal length.

He came to understand that these movements came about in large part through the dynamic interaction of two interwoven, spiral muscle sheets, each one stretching from the base of the back of the skull, encircling the neck and then the trunk, to the top of the front of the pelvis. (These muscle spirals then extend outwards into the limbs.) However, “the majority of people,” Dart later wrote, “suffer from mild, moderate and even serious grades of permanent postural twist, although the condition has not been recognised by themselves or by their medical advisers.”

Also, Dart considered falling to be our primary fear, upon which other anxieties and phobias are superimposed (or modelled). It’s an intriguing theory. Whether true or not, there can be no doubt that any sense of losing one’s balance stimulates powerful neurophysiological mechanisms, including the release of stress hormones such as adrenaline and cortisol, and stiffening of the musculature. For example, if you’re running and lose your footing on the wet or icy ground, or trip on a fallen branch or loose paving stone, and think you are about to fall, your central nervous system will do everything within its power to maintain uprightness to prevent your head hitting the ground.

So, it’s not too much of a stretch to suggest that a similar neuromuscular reaction occurs when you find yourself worrying excessively about Covid-19, except this time it’s prolonged or sustained rather than temporary as in losing one’s balance.

In his ongoing practice of Alexander-lying down, Dart came to appreciate that not only does it have a direct calming effect on the human nervous system, but it also bestows at least three other related advantages for health and well-being. First, it can diminish or reduce ‘bad’ bodily habits brought about by misuses, such as stooped posture and rounded shoulders, or excessive inward or sideways spinal curvature. Second, it retrains the support and contact areas, such as the back of your head, shoulder blades, hip bones, and feet, to share the business of supporting your body weight (which, in turn, aids restful sleep). Third, lying on your back on a firm surface means that you can achieve a better sense of your body’s extensor (or anti-gravity) musculature. That kinaesthetic awareness, incidentally, is also of great help when you want to get back into better shape after a training session, especially if you are experiencing profound fatigue or feel uncomfortable because you have generated an unnatural postural twist.

What to do? Well, Alexander-lying down is best performed daily on a reasonably firm but resilient surface such as a carpeted floor or, if outside, on dry grass or trackside. It can also be carried out more than once a day if you have time, including before sleep.

Probably the easiest way to lie down is to stand relaxed at your full height and then squat by bending your knees over your feet, which should be a good distance apart with the toes turned well out. Allow the palms of your hands to make contact with the floor so you end up on all fours. Now put both knees to the left or right and lie on your side before slowly rolling over so that the back of your head is supported by a small pile of paperback books (or similar support) with your face more or less parallel with the floor. That will allow your neck muscles and head to gently release away from your torso.

Place your arms by your sides with the palms of your hands facing the floor, the wrists turned slightly in towards the body and the elbows slightly out to the side. Alternatively, place the palms of your hands on your lower rib cage or pelvis, elbows out to the side. Bend your knees so that they are pointing directly upwards to the ceiling (or sky) as this helps to release your legs and back muscles.

At this juncture you might find that you have a small arch in your lower back. Don’t be tempted to flatten it. If you wait a minute or two it will often adjust and settle down. Also, keep your eyes open as this will help you stay present. And, as Dart discovered, if you can allow yourself to be supported by the floor you will enjoy the experience of easy breathing that flows from the muscular release facilitated by a calmer mind and gravity.

In getting off the floor, you want to preserve the freedom and elasticity in your musculature. So, slowly let your eyes move either left or right and allow your head to follow. Now allow your knees to turn to the same side, come to a sitting position, and then move into a squat. Pause, and then think of the crown of your head and your heels opposing one another, and maintain that thought as you stand up.

» Dr Sean Carey is a social anthropologist and a member of the Society of Teachers of the Alexander Technique (STAT). He teaches the technique in London’s Old Street and St Albans and can be contacted through the STAT website. For more information, see his book Alexander Technique in Everyday Activity: Improve how you sit, stand, walk, work and run (Hite, £9.99)