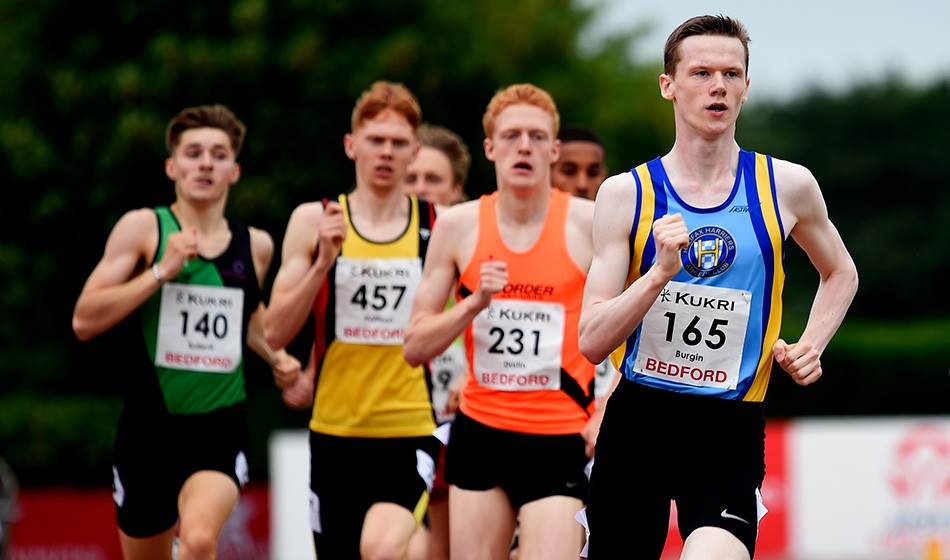 The number of end-of-year awards and nominations Max Burgin has received reinforces just how impressive his 2019 has been, despite injury interruptions, and the 17-year-old is now eager to build on his breakthrough.

After clocking a UK under-18 800m best of 1:46.80 in Loughborough in June, the Halifax runner went on to set a British under-20 and European under-18 record of 1:45.36 just one week later at the England Athletics Championships in Bedford, improving on the 33-year-old UK junior mark of 1:45.64 held by David Sharpe.

Injury prevented him from racing at the European U20 Championships but he returned to the track to make his Diamond League debut in Birmingham and ended the summer ranked No.6 on the UK senior 800m list for 2019, as well as second on the world under-20 list and top ahead of five other British athletes on the European under-20 list.

It has been a year of ups and downs, Burgin says, but one which has provided plenty of lessons to learn from.

“It started off very well and the way I was running early season was just exactly how I wanted to run, it couldn’t have gone better,” says Burgin, recently voted the winner of the under-20 male honour in the AW Readers’ Choice Awards. “But then I got injured and I missed the (European) under-20s, so from my point of view, from June onwards, it was very frustrating.

“I sort of got back for the Birmingham Diamond League but I didn’t do very well in it,” he adds. “It has been a season of ups and downs, but now it’s over and I can look back on the good parts, I’m happy with it.”

The Yorkshire athlete, who is coached by his grandfather and father, can also see the positives in addressing his injury issues now.

“The injury that I got was a weakness that needed sorting at some point, so I’m glad it came up now rather than in the future at a more important time,” he says.

“There were also a lot of lessons that I learned from that Diamond League, getting into the more senior side of the sport. It has been a very informative year.”

Burgin’s performances, which led to him retaining his British Milers’ Club junior male athlete of the year crown and winning the Jim Coote Memorial Award for under-20 male at the British Athletics Writers’ Association lunch in London, also leave him feeling encouraged by what could still be to come.

“I was expecting improvement from last year, though maybe not that much!” smiles Burgin, who has been breaking age-group records for the past few years and ran a world age-15 best in 2018.

“But once I had done it and I knew that I could do it, I felt why couldn’t I go faster? I didn’t get the chance to but hopefully next year I can improve again as much as I did this year.”

Burgin, who is studying geography, history and economics at sixth form, will also have his A-level exams to contend with next summer and while he has an eye on senior championships, his focus is on showing improvement.

Short-term, his goal is running well in 5km road races. “To try and get a respectable time in that,” he says. “I’ll get back into training in preparation for the track season, get some speed back in, and then next year I’d like to improve on my time and maybe competing for the senior championships.”

Although the 2018 European under-18 champion had to sit out the under-20 continental championships, a British trio still managed to sweep the men’s 800m medals in Sweden and Burgin believes it is an exciting time to be a British junior athlete.