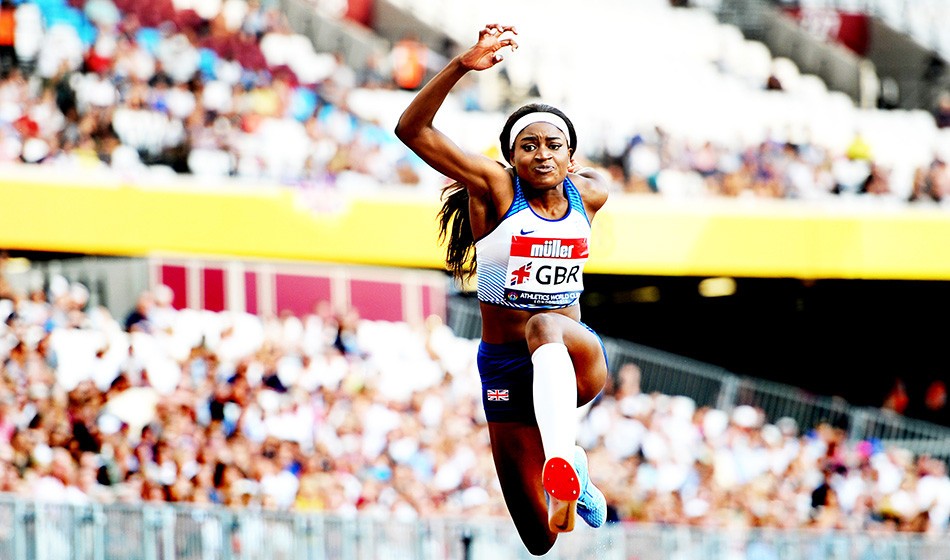 The British triple jump champion is making a name for herself as she juggles athletics, a politics degree and improv comedy

When Naomi Ogbeta started in athletics at the age of 14, she gave herself a deadline of the next season to make the English Schools Championships – or she would quit.

Fortunately for British athletics, the Trafford AC athlete with a passion for performing comedy succeeded. She may have finished one place from the back in her heat of the 200m, but it was the catalyst for a triple jump career which has already taken the 20-year-old to third on the UK all-time list. Despite her goal to make people laugh off the track, when it comes to athletics she is serious about her ambitions.

“I remember I quit doing drama to do athletics, so I thought ‘if I don’t at least get to English Schools in sprinting I’m going to quit’,” admits Ogbeta, who added more than half a metre to her pre-season best in making the European Championships final this summer with 14.15m.

Coming back to that pivotal English Schools moment, she says: “That’s when somebody from Trafford saw that I was quite fast but I had really bad technique.”

At Trafford AC, the man who was to become her coach, Tom Cullen, asked her which events she wanted to do, to which she replied the sprints. However, her father Mathias – a former Northern triple jump champion – butted in with “and triple jump too”.

It proved to be a timely intervention – although she stresses she was never pushed into the sport by her dad, who had a best of 15.66m from 1995. “He allowed me to find my own interests,” she says.

Ogbeta also recently discovered her grandfather in Nigeria had been a triple jumper too. Although she is not sure what standard he reached, it’s safe to say the latest generation has already eclipsed their achievements.

Having set a UK under-17 record of 12.61m, she competed at the IAAF World Youth Championships and two years later won bronze at the European Juniors. She has also won two British outdoor titles.

Yet despite all that, she describes herself as a “lucky jumper” and believes she has much she can improve upon. When asked about what she thought her main attribute was for the discipline, Ogbeta, who followed her appearance in the European final with one on stage doing improv at the renowned Edinburgh Festival, says: “At the moment I’d say I’m just a lucky jumper. I know that doesn’t really make sense, but it’s only really been the last two competitions where I’ve sort of used my speed. I still don’t think I’ve fully used my runway as much as possible.

“I’ve been quite lucky to have been able to jump this far without tapping in to something a lot of jumpers do have that I haven’t developed yet. When I am stronger and I am faster, my distances should improve.” 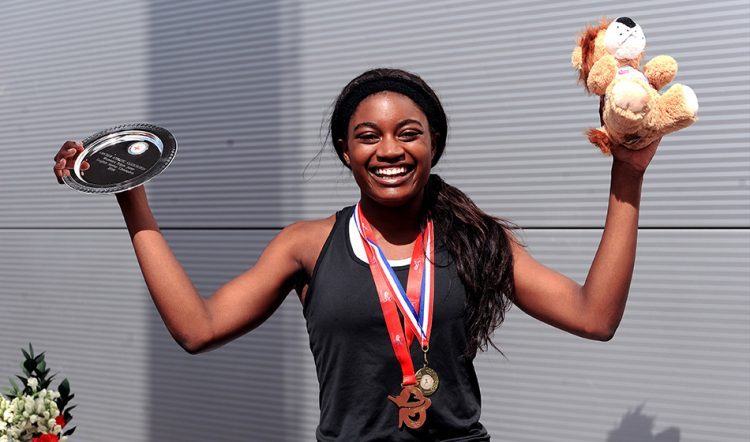 Ogbeta says that even on her 14.15m jump in Berlin, she didn’t hit the board right – as usual, she points out. She believes also that becoming stronger will be to her benefit, but she and Cullen are keen to be gradual with the addition of weights work.

She also thinks competing against the best in the world in events such as the Diamond League will bring her on further.

Speaking about Berlin, she says: “It was really interesting because often I’ve watched Diamond League videos on YouTube and to see the people I’ve seen on there or on TV was, not quite overwhelming, but I was quite happy to be there and I felt I belonged there as well – especially after making the final, I felt I could contend with these in the future.”

The European final put her in at the deep end but having coped well with the pressure, she is looking forward to taking on her idol, Olympic champion Caterine Ibarguen.

Before that, her next focus will be the European Indoor Championships in Glasgow, but in the longer term she has big ambitions.

“I’d like to continue to break records,” says the student of politics and quantitative methods at the University of Manchester. “I know I broke the [British] under-23 record this year and I think what’s left now is the British record and the world record. I’ve always enjoyed breaking records and seeing how far I can better myself.”

Even the British records – currently held by Ashia Hansen at 15.15m (outdoors) and 15.16m (indoors) – are ambitious targets, while Inessa Kravets’ world mark of 15.50m is another giant leap further. However, unlike most young athletes, she is not afraid to reveal her lofty career targets.

If it doesn’t go to plan quickly, will she leave the runway for the comedy stage or does she have more patience than that 14-year-old who set out in the sport six years ago?

“My mindset has definitely changed,” she said, “because I’ve learned that there is more to athletics than just achievements. In 2016 I didn’t achieve that much but I learned so much and I made so many amazing friends and things like that …

“I want to stick with athletics because I do genuinely enjoy it and I think when I stop enjoying it that’s when I’ll just stop. It’s not really about ‘if I don’t achieve this or this by then I’m going to stop’. It’s more about if I stop enjoying the sport I’m going to stop and do something I do enjoy, but at the moment I really do love triple jumping. And I think people can see that when I compete.”

As long as this continues, this would-be comic has the potential to go to the top in triple jump – and that’s no joke.

Almost thru the first month of winter training! Xx #ogsvlogs

Athletics and comedy may not immediately seem to go hand in hand, but Ogbeta – who went straight from the European Championships jumps runway to improv at the Edinburgh Fringe Festival – says the latter helps her in the sport.

Explaining the meaning of “improv”, she says: “It’s acting with a lot of audience participation, so we’ll make up sketches on the spot … It’s definitely helped me with athletics when it comes to nerves because it can be quite similar in a way having to think on the spot, change things and adapt.

“When we do improv, we do different games or scenes and sometimes one game could not go well but you just have to forget it and move on and that kind of reminds me of when I was at BUCS and I did a no-jump and then you have to clear your mind and move on to the next round. And then I did another no-jump and then I had to clear my mind again. I ended up having to change it to a short approach and I ended up winning.”

She would also like to try stand-up comedy and with regards to how seriously she wants to take it all, she says: “I’m still having fun with it but I also want to see how it goes.”

Which is more scary – appearing on stage or on the runway as the centre of attention?

“I think if I already knew people were going to find me funny I’d be happy I was going to go on stage in front of loads of people and make people laugh,” she says. “I’d rather do athletics in front of loads of people than be on stage on my own because you’re the centre of attention and you’ve got one job, that’s to make people laugh. Triple jump is more about yourself and not so much about other people.”

Ogbeta’s vlogs (video blogs) during the European Championships proved an internet hit and she would like to also try her hand at presenting one day. She did some interviewing at Creamfields music festival this year for local radio station Unity FM.