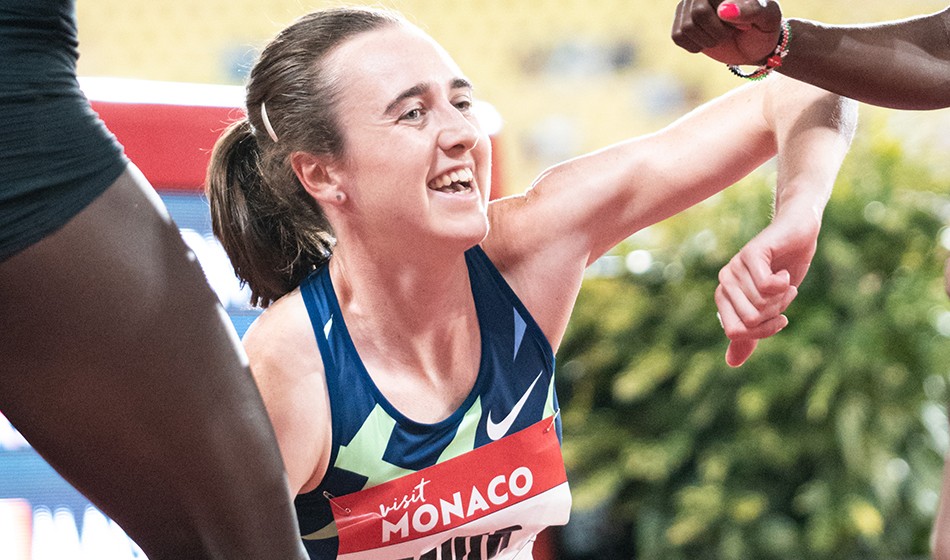 European champion runs 2:30.82 in Monaco to beat a record held by Kelly Holmes

Laura Muir added another British record to her CV on Friday evening as the Scot improved Kelly Holmes’ 1000m mark with 2:30.82 at the Herculis EBS Meeting in Monaco.

On a night of incredible action, the European 1500m champion, who also holds the British record over that distance, finished second behind Kenya’s Olympic 1500m champion Faith Kipyegon, whose 2:29.15 moved her to No.2 on the world all-time list.

Ciara Mageean ran 2:31:06 to finish third, with her time taking more than three seconds off Sonia O’Sullivan’s 27-year-old Irish record, while Muir’s training partner Jemma Reekie finished fourth in a PB of 2:31.11 as they all moved into the top 10 on the world all-time rankings.

“You want to race the race and I would love to have gone out there and won but coming second to the Olympic champion is pretty good,” said Muir. “I’ve gone for that British record once before and missed it so to get it here was great.”

Andy Young-coached Muir and Reekie had spent the lockdown period training together in Glasgow and returned to competitive action in Italy at the start of August. There double European under-23 champion Reekie edged Muir for 800m victory as both dipped inside two minutes.

“Even though we didn’t have many competitions, we were still motivated to push each other on and run well and you’ve seen that in these last couple of races we’ve been running really well,” Muir added, on training with Reekie over the past few months.

“Racing a time like today gives me a lot of confidence going into an Olympic year.

“To do that in my second run, to run a British record, I’m really pleased with it and it’s just great to be back racing.”

Click here for further coverage of the Diamond League action in Monaco, which included a world 5000m record by Uganda’s Joshua Cheptegei, and here for an interview with Laura Weightman, whose 14:35.44 5000m puts her second behind only Paula Radcliffe on the British all-time list.