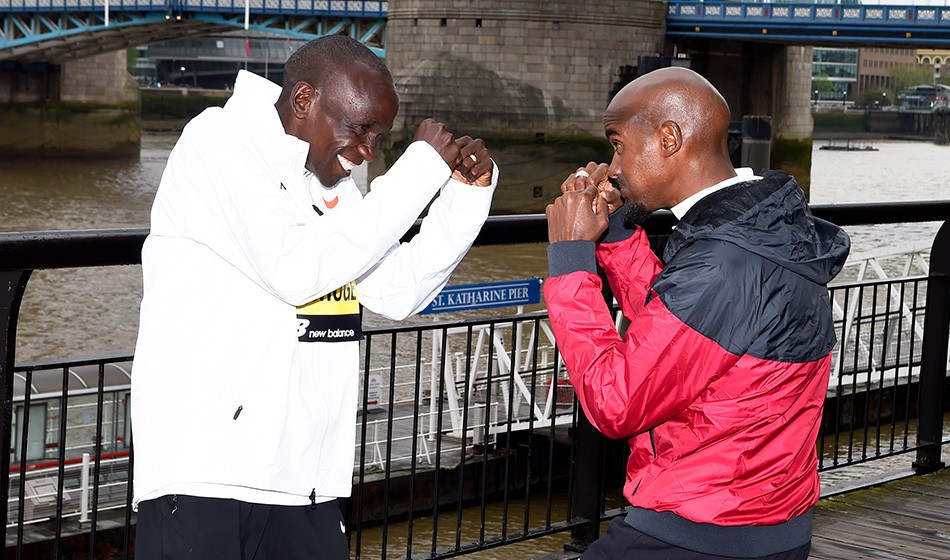 Given his incredible track record on the roads, not many would bet against Eliud Kipchoge winning a fourth title at the Virgin Money London Marathon on Sunday.

The stats speak for themselves. Beaten only once over the marathon distance, the Kenyan’s 10 wins include 2016 Olympic victory and world record-breaking success in Berlin, plus there’s the 2:00:25 he ran for 26.2 miles at the non-record-eligible Breaking2 time trial in Monza in 2017.

Kipchoge, however, does believe he is beatable.

“Anybody can be beaten,” said the world record-holder, preparing to return to marathon action for the first time since his remarkable time of 2:01:39 in the German capital last September.

“Mo can beat me, others can beat me, but the best thing is that if you can accept the results, that’s the only way to enjoy the sport.”

While the field features six other sub-2:05 runners, it’s Kipchoge vs Mo Farah which is being billed as the big head-to-head in the UK capital, as the Briton aims to build on his maiden major marathon win in Chicago where he broke the European record with 2:05:11.

October’s Chicago race was 10-time global track gold medallist Farah’s third marathon and Kipchoge admitted to being surprised and motivated by his progress.

“I’m really surprised that [Mo] is learning so fast,” he said. “As far as the sport is concerned, he is a fast learner. It doesn’t worry me, but it makes me get interested in him because that’s what you want in sport; it’s what helps you perform.

“I am coming to London to win the race and defend my title. If I can win again in London, I will be a happy man because it will be my first race after running the world record.”

Farah made a strong statement by breaking the British record to finish third in the UK capital behind Kipchoge and Ethiopia’s Shura Kitata last year, with his decision to stick with the leaders despite the brutal early pace paying off.

Kitata also returns to race, while they will be joined by athletes including Kenya’s Wilson Kipsang, who beat Kipchoge over 26.2 miles in 2013 when he broke the world record in Berlin.

At the pre-event press conference, 61:20-61:25 was mentioned as a potential target halfway split time for the leading men’s group, with 61:00 clocked at that stage last year.

“My aim is to win the London Marathon one day, that is my task, but you can’t take anything for granted because Eliud is a great athlete and he’s the world record-holder – 2:01. On Sunday, if I do beat him, and it comes down to that, it would be an amazing achievement,” said Farah.

On whether he’d again stick with the lead group at that pace, he added: “I’ll have a chat with my coach and see what we can do. If I’m feeling good, then why not?

“I’m learning as I go along. The marathon is completely different to the track. Since racing against Eliud in London last year and having to learn the hard way – I believe I’ve learned a lot. Each race you get better and get a bit more experience.”

Away from road race action, Farah’s head-to-head with Kipchoge wasn’t the only clash hitting the headlines on Wednesday as a dispute over an alleged theft led to a public spat between Farah and Ethiopian running great Haile Gebrselassie. Read more here.