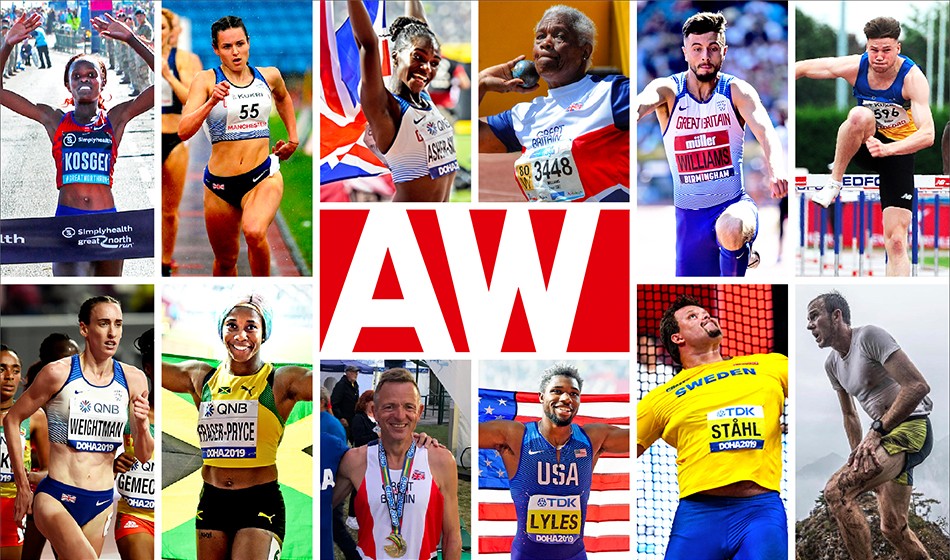 Most end-of-year honours are picked by small panels of experts, but the AW athletes of the year awards are chosen by you, the readers.

There are categories that cover the leading British and international athletes, plus sections for under-20 and masters performers.

These accolades are just a bit of fun with no real hardware up for grabs, but what better honour is there than knowing you have impressed the most knowledgeable athletics readership in the world?

Voting closes on Tuesday December 10 with the results published in the December 19 edition of AW magazine. Following the World Para Athletics Championships, the voting form has been updated to include British para athletics nominees.

Salwa Eid Naser: Unbeaten at 400m this season, the Bahraini shocked Olympic champion Shaunae Miller-Uibo to win the world title in 48.15 and go third all-time with what was the quickest time for 34 years.

Shelly-Ann Fraser-Pryce: The double Olympic champion won the world 100m title in a very fast world-leading 10.71 to just miss her seven-year-old PB. She also won gold in the 4x100m relay and ran 22.22 for 200m.

Mariya Lasitskene: For once she was not unbeatable at the high jump and ‘only’ won 21 of her 23 competitions, but the Russian landed her third world title with a 2.04m leap and equalled her PB with 2.06m, a height that puts her equal fifth all-time. Also won the European indoor title and bettered two metres on 17 occasions.

Brigid Kosgei: Won all seven of her races in 2019, highlighted by smashing Paula Radcliffe’s world marathon record with 2:14:04 in Chicago. Also ran the world’s fastest ever half-marathon with 64:28 at the Great North Run, won the London Marathon in 2:18:20 and ran the fastest legal half-marathon of 2019 with a 65:28 clocking.

Malaika Mihambo: Having never previously beaten seven metres, the German did it in seven long jump competitions in 2019, peaking with a huge win in the World Championships with a 7.30m leap, which puts her 12th all-time. Her only loss in 14 competitions this year was at the European Indoor Championships, where she was fourth. Improved her 100m speed to 11.21.

Dalilah Muhammad: The Olympic champion first reduced the 400m hurdles world record from 52.34 to 52.20 in winning the US Championships before improving it to 52.16 in winning gold in a great battle with Sydney McLaughlin in the World Championships. She also improved her 400m PB to 50.60 and was in the USA’s 4x400m gold medal-winning team in Doha.

Yulimar Rojas: Went second all-time in the triple jump to close within nine centimetres of the world record with a 15.41m leap at Andujar and then backed that up with a 15.37m leap to retain her World Championships title by a huge margin.

Christian Coleman: Was in the news as much for his missed tests as his sprinting but proved himself athletically with an easy win in the World Championships 100m in a world-leading 9.76. He broke 10 seconds eight times in all his five competitions at 100m and also ran a 19.91 200m. Played a vital role in the USA’s American record 37.10 in winning the 4x100m world title.

Sam Kendricks: Competed 25 times in 2019 and won on 19 occasions but proved his big-time temperament by winning an exciting World Championships with a 5.97m vault. He improved the American record to 6.06m in winning the US Championships to go second all-time outdoors.

Eliud Kipchoge: The Kenyan only competed once in 2019, a course record and then world-leading 2:02:39 in winning at London. However, he made history in a paced non-competitive run in Vienna as he timed a ground-breaking 1:59:41 in the marathon.

Noah Lyles: Won the World Championships 200m in 19.83, having previously run a world-leading 19.50 in Lausanne which places him fourth all-time. He was unbeaten in 200m finals in 2019 but was impressive at 100m, too, winning in Shanghai in 9.86. He also contributed to the USA’s 4x100m winning team in Doha.

Daniel Stahl: The Swedish thrower won 13 of his 16 discus competitions with a top-class average of 69.94m for his best 10 competitions. He took World Championships gold with a modest 67.59m throw to win his first major title at the 13th attempt. His world lead of 71.86m moved him to fifth all-time, which was the longest throw by anyone for 11 years.

Christian Taylor: Triple jumper suffered three defeats in 2019, but again won the event that mattered as he took the world title with a 17.92m leap, his best legal mark of the year as he bettered the world leader Will Claye. He also beat Claye in the Diamond League final with a wind-assisted 17.85m.

Alyson Dixon: Won the world 50km title on her ultra running debut, also breaking the world record with her time of 3:07:20. Broke the Guinness world record for the fastest superhero to run a half-marathon, clocking 78:26 at the Simplyhealth Great North Run when dressed as Wonder Woman.

Katarina Johnson-Thompson: Gained global gold in the heptathlon, breaking the British record with her world-leading score of 6981 points to move to sixth on the world all-time list. Also claimed the European pentathlon title with a world-leading score.

Eilish McColgan: Broke her mum’s Scottish 10-mile record with 51:38 to retain her Simplyhealth Great South Run title, also moving to second on the UK all-time list behind Paula Radcliffe. Improved her own Scottish 5000m record (14:46.17) to place 10th at the IAAF World Championships.

Sophie McKinna: Threw 18.61m to make the world final, becoming the first Briton to do so since the inaugural championships in 1983. Her mark – which was the longest throw by a British shot putter in 21 years – consolidated her fifth place on the UK all-time list.

Jonathan Albon: Gold at the World Trail Championships in Portugal in June. He as also excelled in skyrunning and obstacle course racing and runs for Britain in the World Mountain Long Distance Running Championships in Argentina next month.

Adam Gemili: Led the world 200m final coming into the home straight and finished a close fourth in 20.03 before going on to win 4x100m silver in Doha. Also took 200m gold and 100m silver at the British Championships.

Callum Hawkins: After a marathon PB of 2:08:14 for 10th at the London Marathon to go No.3 on the UK all-time rankings, he finished fourth in the World Championships – just six seconds outside a medal – after having been in the lead with a mile to go.

Nick Miller: Threw 78.39m to rank seventh in the world and was 10th in the World Championships despite a good effort being controversially ruled a foul. Season’s best is second only to his UK record from last year, too.

Jake Wightman: With the men’s 1500m being of a very high standard this year, he set a Scottish record of 3:31.87 when finishing fifth in the world final in Doha despite struggling last winter with injury.

Ben Williams: Huge PB of 17.14m to win the triple jump at the European Team Championships in Bydgoszcz before improving further to 17.27m at the British Championships.

Keely Hodgkinson: Claimed European under-20 800m bronze in a PB of 2:03.40 and still has two years left in the junior age group.

Amy Hunt: Broke the world under-18 and British under-20 200m record with 22.42 and subsequently won the European under-20 title. Her PB puts her second on the UK senior season rankings.

Lucy-Jane Matthews: Broke the UK under-18 best with 13.38 to claim European under-20 bronze in the 100m hurdles as the youngest athlete in the field.

Holly Mills: Claimed European under-20 long jump bronze and finished fourth in the heptathlon. Her heptathlon best of 5802 points put her third on the senior UK rankings.

Lewis Byng: Beaten only twice in the shot put all summer when fourth in the British Championships and eighth at the European Under-20 Championships. Also moved into No.2 on the UK all-time under-20 rankings with 19.14m with the 6kg shot.

Alastair Chalmers: Improved his UK under-20 400m hurdles record to 50.07 in Geneva. Went into the European Under-20 Championships at hot favourite but was disqualified for running outside his lane in the semi-final. Fourth in the British senior champs.

Oliver Dustin: Led the British sweep of the medals in the European under-20 800m final in Sweden as he beat Ben Pattison
and Finley Mclear to the title. His PB of 1:46.84 places him 14th in the UK senior rankings for 2019, too.

James Tomlinson: Discus thrower was fifth at the European Under-20 Championships and runner-up at the Halle throws meeting and Mannheim junior international. PBs of 53.13m (2kg) and 61.64m (1.75kg) put the 19-year-old into the UK all-time junior top 10.

Jane Horder: In her third year in the W60 age group, won the world masters indoor title at 60m hurdles and then three golds at the European Masters at 100m hurdles, 300m hurdles and 4x400m relay. She also won a British indoor title over 60m and topped the W60 400m rankings for the year from her fourth place in the World Indoors.

Caroline Powell: Made a notable debut in the W65 age group this year, winning the world indoor 60m title and silvers at 200m and 400m. Also won five golds at the European Masters, including titles at 100m, 200m and 400m, the latter in a European record 68.67.

Donald Brown: Won the world masters indoor 60m hurdles title and also picked up a bronze in the 60m. Raced over 50 times in 2019 and nine of those races came at the European Masters in Italy as an M55. He won the 100m, 100m hurdles (in a British record 14.62) and the 200m, as well as running a storming 4x100m anchor leg where he came from well back to snatch a silver for Britain.

Mike Coogan: Focused almost exclusively on the 200m, in which he won the M45 world masters indoor title (and also ran the fastest M45 time in the world indoors of 22.80). He then won the European masters title and contributed to the winning 4x100m team.

Paul Fletcher: Third in the world masters M60 indoor 1500m before winning three golds at the European Masters with an unusual treble at 1500m, 10,000m and 800m. The latter was the race of the championships, where he came from well back to snatch victory on the line from fellow Brit Keith McGhie in a vet PB 2:15.22. Also won the Westminster Mile and BMAF title in 5:10 to go second all-time among Brits.

Ian Richards: The former Olympic 50km walker dominated his M70 age group winning the world masters 5km walk and
then taking European titles in the 5000m track walk, 10km and 20km as well as two team titles. His toughest opponents were often the judges as he was disqualified from the British masters 3000m indoor and outdoor championships as well as the world masters 10km.

John Wright: Moved into the M60 category in June and made an immediate impact, winning triple sprint gold in the European Masters. He took the 400m in a superb 55.13 to win by almost four seconds and break Steve Peters’ UK record. It was the fastest in the world by over two seconds. Wright also won the 200m in 24.58, a second quicker than anyone else in the world.

Hollie Arnold: Added another title to her growing list with F46 javelin gold in Dubai.

Aled Davies: Another shot put title for the F63 thrower in Dubai.

Thomas Young: Silver in the T38 100m in Dubai but with a European record.