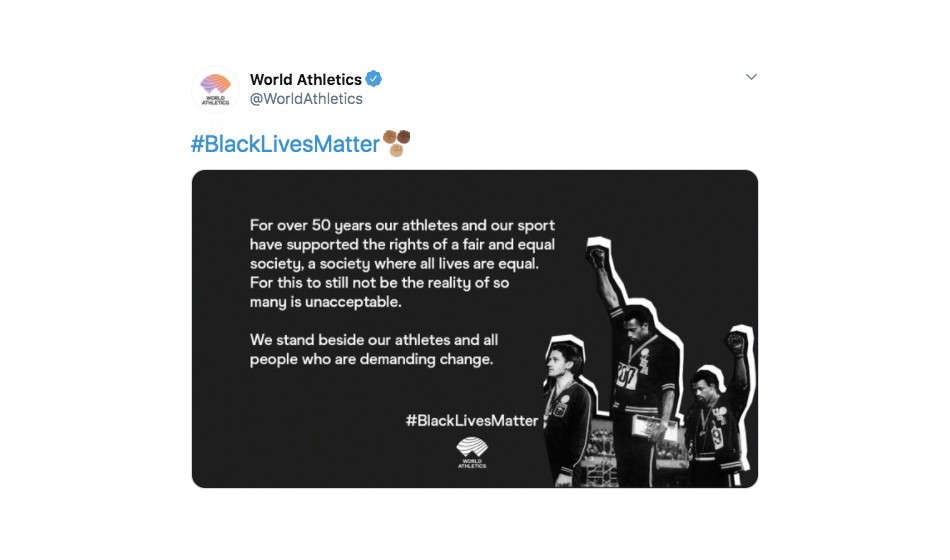 World Athletics and athletes around the globe have shown solidarity with the Black Lives Matter movement, calling for change following the death of George Floyd.

Floyd died after being restrained by Minneapolis police, with video footage showing a white police officer, Derek Chauvin, continuing to kneel on Floyd’s neck despite his pleas that he could not breathe.

It has led to protests around the world and reignited anger over police killings of black Americans.

On social media, many users have been posting black squares as part of ‘Blackout Tuesday’, to show support for Black Lives Matter, with links to anti-racism resources also being shared.

On Monday, athletics’ global governing body published a graphic across its social media channels, stating that World Athletics “stand beside our athletes and all people who are demanding change”.

Featuring an image of American sprinters Tommie Smith and John Carlos raising their gloved fists in a black power salute on the 200m podium at the Mexico 1968 Olympic Games, the graphic adds: “For over 50 years our athletes and our sport have supported the rights of a fair and equal society, a society where all lives are equal. For this to still not be the reality of so many is unacceptable.”

In his own social media post, World Athletics president and two-time Olympic 1500m gold medallist Seb Coe wrote: “Our athletes and the athletics’ family have been rocked by this so I am going to call the sport together. We must find our collective voice and practical actions.”

“I could go into what it means to be black, but now’s not the time for that. Now is the time to be clear on the most important, simple fact: you don’t need to know black people to understand the change that needs to be made.”

In a video posted on Instagram, European and Commonwealth long jump medallist Jazmin Sawyers says: “Black people need the non-black voices more than anything in this movement.

I FEEL IT IS MY JOB TO SAY SOMETHING