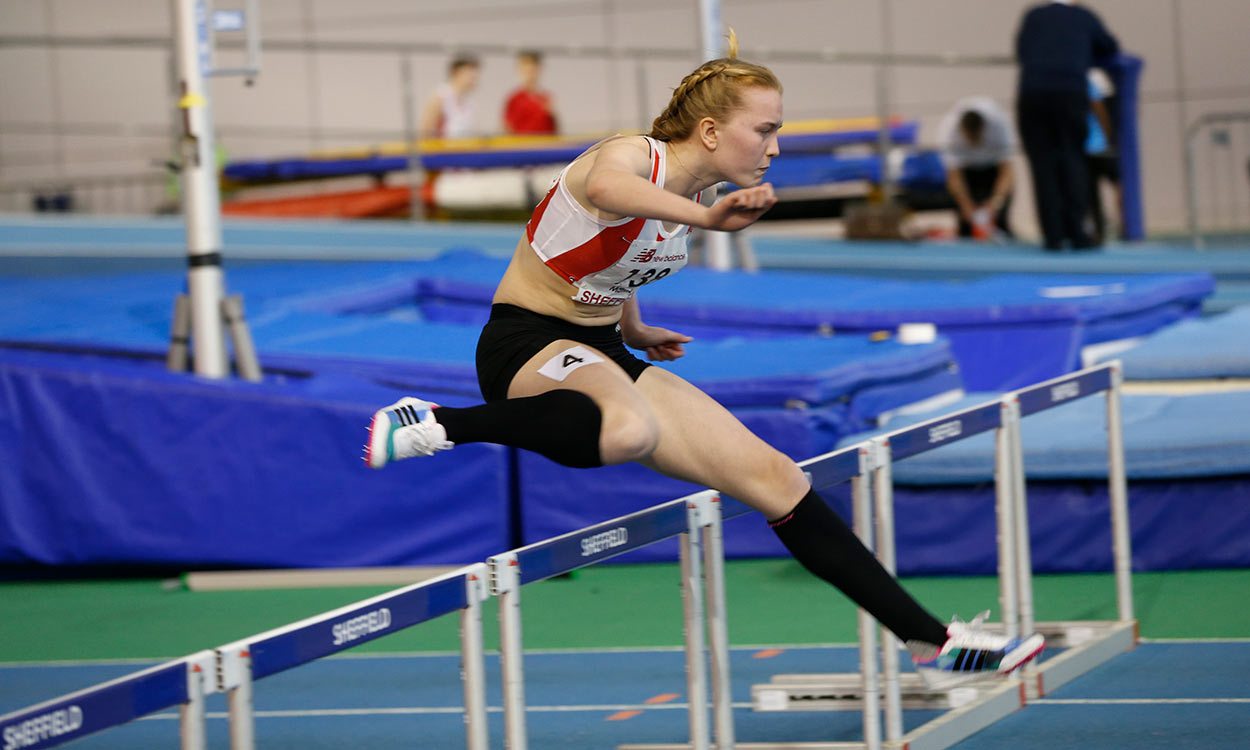 After winning her first national medal when claiming bronze in the high jump at the England Athletics under-15 Indoor Championships earlier this year, Lucy-Jane Matthews returned to the national stage two weeks later to take gold in the pentathlon equivalent.

The 15-year-old set PBs in all five events en route to a 3649 championship record points score that took her to second on the UK all-time under-15 indoor list – behind only Olympian and 2014 double world junior champion in heptathlon and high jump, Morgan Lake.

“My proudest moment was stepping up on to the podium to receive my medal. It felt amazing,” explains the Southampton athlete. “Three months prior, I had won the South of England combined events, but my preparation was woven with injury and illness. However, it all came together on the day and I started with a PB of 8.96 in the hurdles, which was a great start.”

Despite living in Salisbury, Lucy-Jane has been a member of Southampton AC since she was 10 and trains with the combined events squad at the club three times a week. The young athlete is guided by Andrew Fisher, with Dave Callaway coaching her for throws.

“Andy excels in helping athletes achieve their full potential,” she says. “His preparation techniques are spot on and he is incredibly knowledgeable and dedicated. Dave has possibly the loudest voice in the world, which is great as you can always hear cheering no matter where he is in the stadium. He always knows exactly what to say to fire us up.”

The talented teenager watched Jess Ennis-Hill, Mo Farah and Greg Rutherford take victory on super Saturday five years ago and is now aiming to become an Olympic champion herself one day.

Lucy-Jane’s talent has not gone unnoticed either as, since 2014, Wiltshire council have supported her with their Funding Future Olympians award, which has gone towards her cost of equipment and travel to training and competitions.

As well as her own sporting ambitions, Lucy-Jane wants to help out in the sport.

“I am following the England Athletics coaching pathway and have completed the ‘Leading Athletics’ course,” she adds. “I wish to continue to become a fully qualified coach so that I can give back to the sport.”

Having watched Ennis-Hill romp to her Olympic title, it is of little surprise that Lucy-Jane names the three-time world champion as her biggest idol.

“She is a perfect example of an athlete being amazing when it counts,” she says. “She has gone through injury and, instead of allowing the disappointment of missing an Olympics affect her, she just came back stronger. If that’s not something to take inspiration from, then I honestly don’t know what is.”

However, there is one other person who Lucy-Jane is quick to credit – her mum. “The support she provides me to achieve my goals has no end. Whenever I take a medal home, it’s seen in my eyes as not my medal, but ours,” she explains.