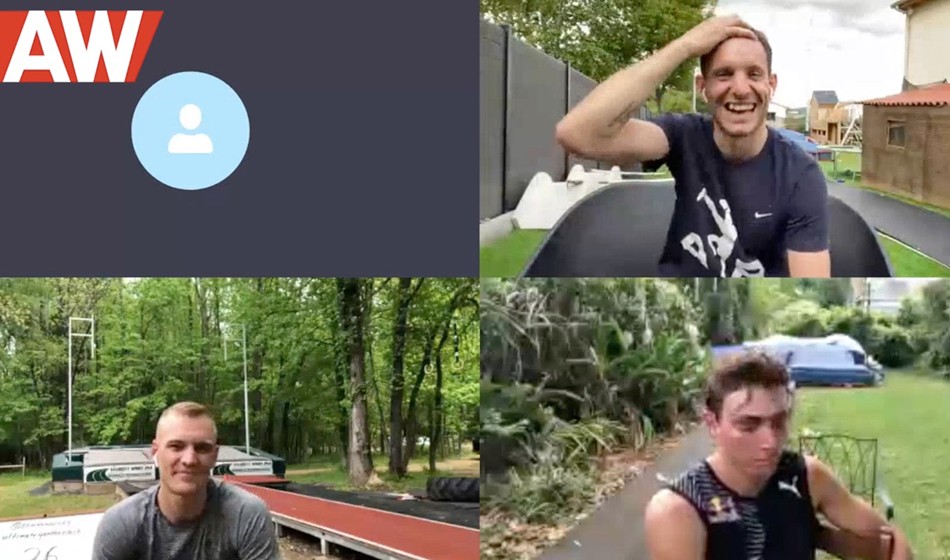 After their ‘Ultimate Garden Clash’, the pole vault trio spoke to the media in a virtual mixed zone and shared insight into their current remote set ups

With traditional athletics suspended due to the coronavirus pandemic, the trio each vaulted from the comfort and safety of their own back gardens and competed via a live video link.

The exciting battle, in which the athletes had to vault 5.00m as many times as they could within 30 minutes, ended in a tie as Duplantis and Lavillenie both achieved 36 clearances. Kendricks managed 26.

The event even had a virtual mixed zone afterwards and here is what Duplantis, Kendricks and Lavillenie each had to say to a question from AW about their training in lockdown and whether they prepared specifically for the contest.

“I didn’t necessarily have specific training towards the event,” said world record-holder Duplantis, who cleared 6.18m in Glasgow in February.

“I did a practice round of a 10-minute interval to see how it was and after doing that I realised how hard 30 minutes was going to be!

“I’ve been doing a lot more strength-based exercises, a little less running because I don’t really have a track available to me at the moment, everything is closed. I have this runway here so I can jump a bit from a short approach. I have some gymnastic equipment.

“I’m just trying to stay in shape as best I can.”

Two-time world champion Kendricks, who was vaulting at his family farm, said: “I’ve been riding my horses, I’ve been training on this runway.

“Trying to get out in the open air is hard, especially when everybody is stuck at home. We have been really valuing that recently.

“You can’t do everything to be ready for competition but you want to get that feel. Preparing for this was honestly the best training of the whole spring!”

At home with his young family, Olympic gold medallist and former world record-holder Lavillenie said: “Since we knew that the Olympic Games were not going to be this year, I got more relaxed and tried to take the time.

“My training is more about doing some cycling at home on my home trainer, doing some weight lift training sometimes and doing some jumps because that is what I love.

“I have also been training with my daughter, Iris, which is sometimes harder than my real sport!”

Click here for a full event report and to watch footage of the action.