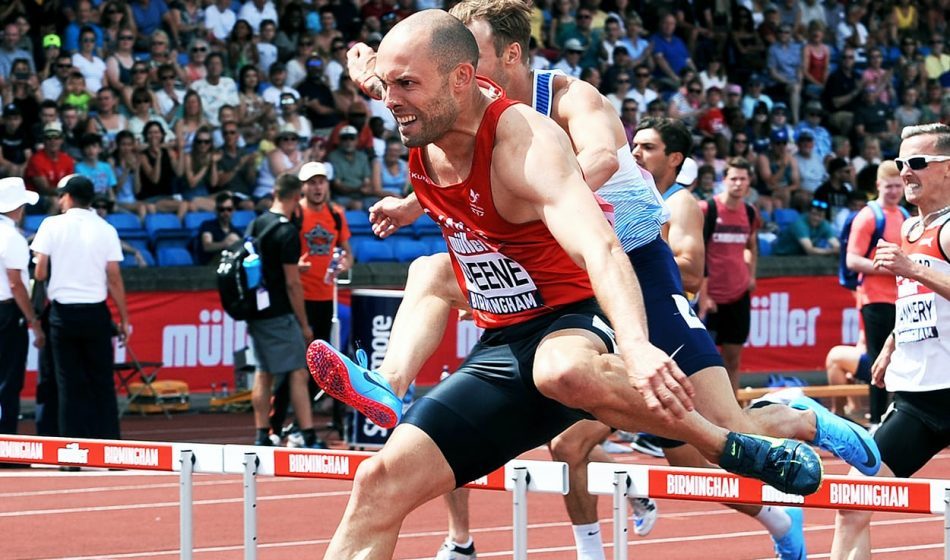 Dai Greene has given captain’s speeches to Great Britain teams before, but the delivery of his address ahead of the European Championships in Berlin will have been the most heartfelt of his career.

“The message usually is that everyone has earned the right to be here – don’t worry about anyone else and make the most of the opportunity because it’s pretty fragile,” says the Welshman – and he should know better than most.

The 400m hurdles world champion from 2011 has endured a torrid and lengthy battle with injury, which has involved two hernia operations as well as groin problems and hamstring trouble, but he now appears to be winning – or at least gaining something of an upper hand.

It has been a long road back but the 32-year-old announced his return fully by winning the British title last month and will now take to a championship startline for the first time since the 2014 Commonwealth Games when competition in the German capital’s renowned Olympic stadium gets under way on Monday.

He will do so as skipper, following stints at the head of the team at events in 2011 and 2012, after being voted into the position by his colleagues – not that he is necessarily all that familiar with some of them.

“Coming back into the set-up has been seamless – I know a lot of the guys from before,” he says, before adding: “but being named captain was a bit of a surprise, especially as I don’t know everyone on the team! There are a lot of new athletes in there.”

There is indeed a youthful age profile to the 102-strong squad which will be competing here, but the new faces have certainly given their more senior captain reason to be cheerful.

Given the recent sixth anniversary of Super Saturday, and with Jess Ennis-Hill retired, Greg Rutherford about to follow and Mo Farah’s track career over, the sport in Britain is looking for long-term successors to step forward.

Dina Asher-Smith will find herself in the sprint spotlight, of course, as will Reece Prescod and Zharnel Hughes, while expectations will be high for the likes of Laura Muir, too.

Greene believes these championships could well accelerate the process of creating new heroes.

“I guess we’ve been spoiled from 2012 in terms of getting household names almost overnight really, with the Olympics,” he adds. “But now those athletes are finishing then the younger generation are ready to step into the spotlight.

“It’s hard to step up into that realm where you’re a household name, because you have to be winning regularly, but I’m sure people will perform really, really well, tell their stories and propel themselves (forward).”

“I would say the top two medals have maybe gone and, for me, I think I’ll need to run a season’s best just to make the final,” he says. “That will be my goal and it’s been my goal for the past few months, really.”

Given the pain he has had to endure, how will he feel to simply be back in the heat of competition?

“Excited,” Greene says. “It’s the sensation of being on the startline of a big champs that is the big draw for me. You can compete throughout the season at the Grands Prix but they don’t really mean anything.

“It’s all or nothing when it gets to the champs and I’m just looking forward to having that sensation – it brings out the best in me in terms of my competitive side and I feel like it’s still in there. I was fortunate to win the British championships and it felt like second nature to me again so I’ll hopefully feel the same again.

“I thought I was going to get back eventually – I just had to grind it out, focus on short-term goals and then the end goal was competing at a high level.”