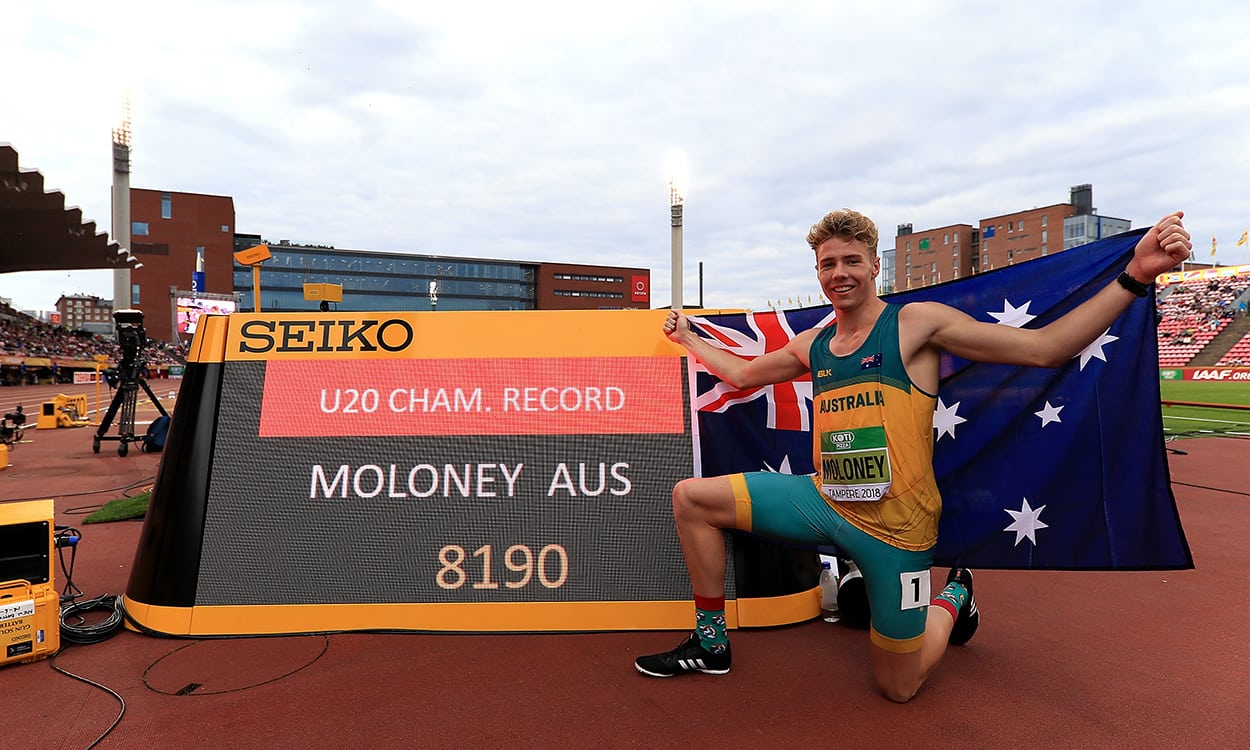 After setting PBs in eight of the 10 events, Australia’s Ashley Moloney racked up a record-breaking 8190 points to win the decathlon title on the second day of the IAAF World U20 Championships in Tampere, Finland.

Picking up from where he left off on day two, Moloney clocked a 14.13 PB in the 110m hurdles, threw a 47.39m PB in the discus and equalled his pole vault PB with 4.60m before adding more than five metres to his previous javelin best with 53.67m.

Finally, he clocked a lifetime best of 4:42.65 in the 1500m to secure success in style, also breaking the Oceanian under-20 record and moving to second on the world under-20 all-time list. His team-mate Gary Haasbroek claimed silver with a 7798-point PB and Switzerland’s Simon Ehammer the bronze with a PB of 7642.

“I’m feeling a rollercoaster of emotions,” Moloney told the IAAF. “I just tried to do my best in every single event.

“The huge PB in the high jump was the highlight. It means a lot to me to have Gary by my side.”

There was a surprise victory in the men’s 100m as Lalu Muhammad Zohri gained an historic gold for Indonesia, clocking a national under-20 record of 10.18 (+1.2) from lane eight to pip USA’s Anthony Schwartz and Eric Harrison who both ran 10.22. 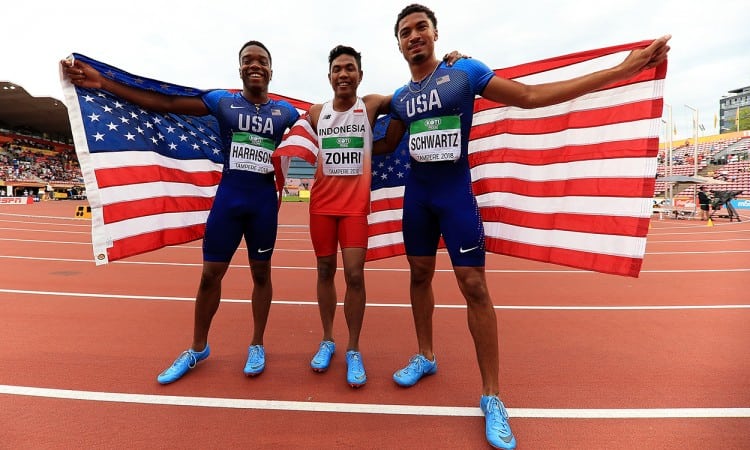 GB’s Dom Ashwell finished a fine fifth, missing a medal by just 0.03 with a PB of 10.25, while his team-mate Chad Miller narrowly missed out on the final after finishing third in a close semi-final with a time of 10.38.

“I’m absolutely buzzing,” said Ashwell. “It’s such a wicked experience – the whole venue, the race, even on the start line it was absolutely electric. I couldn’t wait to race.

“Watching it back on the big screen and seeing I was that close was a great feeling. It’s bittersweet but I can’t complain.”

There were two gold medals in 20 minutes for Japan as first Nozomi Tanaka front-ran her way to the 3000m title in a PB of 8:54.01 to finish two seconds ahead of Ethiopia’s Meselu Berhe. Ethiopia claimed a second medal with Tsige Gebreselama in third in 8:59.20, while Tanaka’s team-mate Yuna Wada was fourth in 9:00.50 as the top 13 all ran lifetime bests.

A short while later, Yuki Hashioka leapt to long jump victory thanks to his 8.03m from the third round to beat Cuba’s Maikel Vidal with 7.99m and Jamaica’s Wayne Pinnock with 7.90m.

Heptathlete Alina Shukh of Ukraine has a busy programme at the championships as she’s contesting both the seven-discipline event and the individual javelin.

The first part of her campaign ended with success as she sent the javelin soaring out to 55.95m in the third round and that was enough to get her the gold ahead of Japan’s Tomoka Kuwazoe with 55.66m and USA’s Dana Baker with 55.04m.

New Zealand’s Madison-Lee Wesche left it late but she gained the gold in the shot put thanks to a PB throw of 17.09m in the final round. Already assured of a medal, she sat behind China’s Linru Zhang and Jorinde van Klinken of the Netherlands until her last throw put her to the top.

Zhang and Van Klinken had both earlier thrown exactly the same mark – 17.05m – with the Chinese athlete securing silver on count back.

British under-20 record-holder and joint GB team captain Jake Norris had earlier launched himself into the hammer final with a throw of 76.95m in qualifying and he’ll be joined by team-mate Bayley Campbell who finished in the top 12 with 69.75m to secure his spot. Among those to exit the competition was pre-event favourite Christos Frantzeskakis of Greece after three fouls.

In the 800m semi-finals, GB’s Katy-Ann McDonald clocked 2:03.20 – a PB by almost a second – to finish second in her race and book her place in the final. Isabelle Boffey’s competition came to an end as she ran 2:11.49 for eighth in her semi-final, while USA’s NCAA champion Sammy Watson also didn’t advance after her time of 2:03.95 for fourth in her race.

Jason Nicholson ran a PB in both his heat and semi-final to secure a place in the final of the 110m hurdles. First clocking 13.58 (+1.0) before falling into a forward roll at the finish line, he then returned to the track to improve again with his semi-final time of 13.32 (+1.4) seeing him finish ahead of world under-20 record-holder Damion Thomas of Jamaica with 13.37. That time also puts the Briton joint fourth on the UK all-time under-20 list.

South Africa’s world under-18 champion Zeney Van Der Walt went quickest in the 400m hurdles heats with 57.78, while Jonathan Jones of Barbados clocked the fastest time of the 400m heats with a PB of 46.05. Jamaica’s Christopher Taylor won his race in a comfortable 46.14.

World under-20 record-holder Armand Duplantis of Sweden soared into the pole vault final with his first-time clearance of 5.30m in qualifying – that was the only jump he needed to make it through.

Another pre-event favourite, Hima Das of India, was fastest in the 400m semi-finals, clocking 52.10.