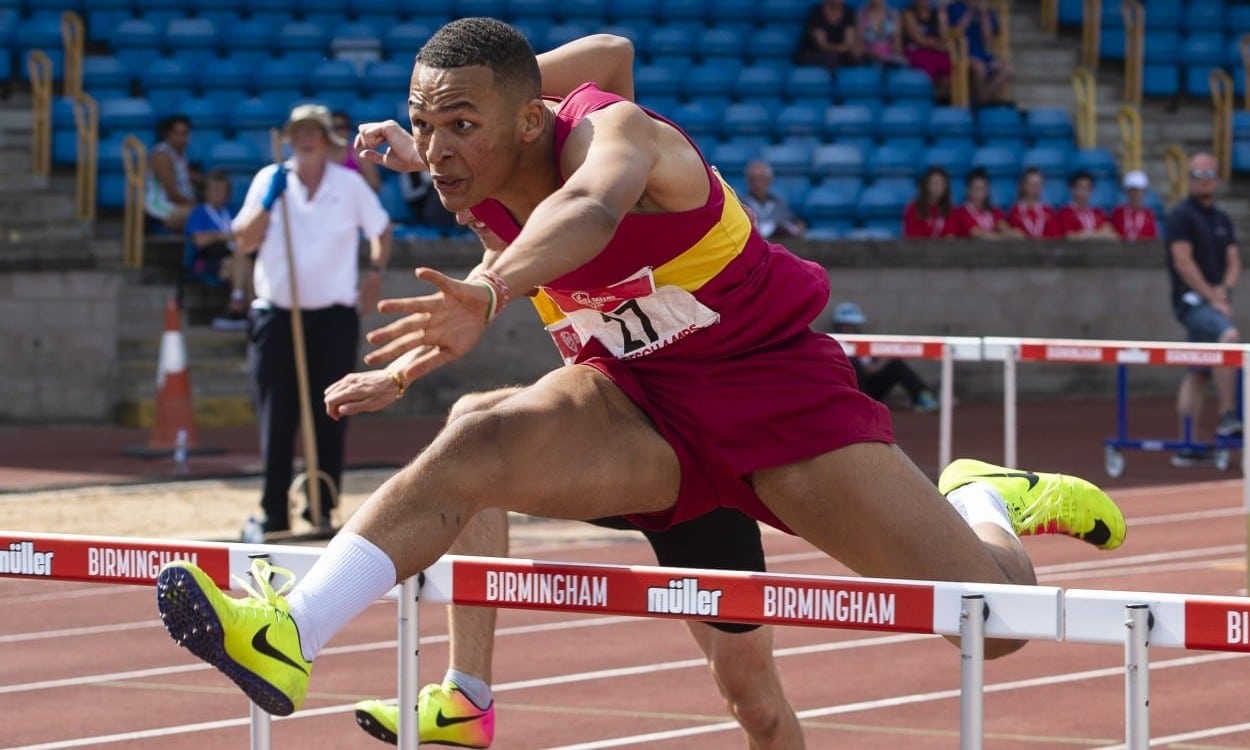 Dramatic contests, several championship records and many great stories emerged on day two of the New Balance-sponsored event in Birmingham

Six of the nine athletes who won medals for Britain at the European Under-18 Championships in Gyor earlier this month were among the champions at the 88th English Schools Championships at the Alexander Stadium on Saturday.

Despite being drained from their exertions in the Hungarian town last week, they were determined to represent their county at this historic event. Even when you’re one of the best in Europe, winning an English Schools title clearly still matters.

They included Sam Bennett, the European under-18 sprint hurdles champion, who took the senior boys’ 110m hurdles crown in Birmingham in 13.63 (1.3) ahead of Tade Ojora, who remarkably had set a championship record of 13.54 (-0.1) in the heats.

“I’m coming back from a long week away (in Hungary) and I’m really tired,” said Bennett (pictured). “I’ve been sleeping a lot in the days before this event and have been catching up with school work.”

The Essex hurdler added: “Tade was really fast in the rounds. We didn’t see another record in the final but he pushed me to a PB so I’m very pleased.”

Amazingly, it added to the long jump and high jump English Schools title he has won in previous years – a unique triple crown that no one else has achieved since the event began in 1925.

“Before this I’d only run one 200m this season at the county champs,” he said, adding: “I wasn’t expecting to win as I was a bit tired after flying back from Hungary on Monday.”

Thomas Keen captured Britain’s first gold at the European Under-18 Championships when he won the 3000m in Gyor, but in Birmingham he had to wait until near the end of the two-day championships to take to the track. He did not disappoint either as he won in 8:24.81 and said: “For all English athletes this is a massive event. We still want to win a title here, even if we’ve already gone off to the Euros.”

Similarly impressive was Emily Williams, the Euro under-18 silver medallist, as she beat Olivia Mason to inter girls’ 1500m gold in 4:31.97.

Karl Johnson, a Euro bronze medallist in Gyor, won an exciting senior boys’ 400m hurdles in 51.69 – close to Max Robertson’s long-standing championship best of 51.5 – as he overtook Seamus Derbyshire in the closing stages.

Another Euro under-18 silver medallist, Ethan Brown of Kent, ran a steady first 200m in Birmingham before powering through to win the senior boys’ 400m in 47.89.

There was even a Dutch gold medallist from the European Under-18 Championships in action in Birmingham. Raphael Bouju was born in Amsterdam and struck gold for the Netherlands in Gyor, but he moved to England when he was four years old, lives in Bedford and took the English Schools inter boys’ 100m in 10.66 on Saturday.

As the heatwave summer continues in the UK, the fine weather helped create a number of championship records on Saturday to add to those achieved on the first day of the event on Friday.

Javelin thrower Ben East has only been throwing seriously for a couple of years but the Berkshire athlete smashed the junior boys’ record by more than five metres and improved his UK under-15 record with a throw of 66.95m.

As ever, lots of great stories were sprinkled throughout the dozens of finals in the six age groups. One theme, though, was the success of siblings.

Kiah Dubarry-Gay, for example, won the inter girls’ 200m in 23.90 after her twin sister, Nayanna Dubarry-Gay, had won the inter 100m earlier representing London. “We’re pretty competitive with each other,” said Kiah, “but I run the 200m basically because I prefer the longer distance.”

In similar style, Josie Oliarnyk of the West Midlands took the senior girls’ long jump with 6.19m after her sister Iris had won silver in the inter girls’ triple jump.

The Ojora family almost made it a golden double, too. Temi Ojora won the inter girls’ high jump gold with 1.75m while brother Tade finished runner-up in the senior boys’ sprint hurdles.

Inevitably, talent runs in the genes as well and this was demonstrated when Matt Buckner of Berkshire won the senior boys’ 200m in 21.54. His father is 1992 British Olympian and 3000m steeplechaser Tom Buckner and his uncle is 1986 European 5000m winner Jack Buckner. Although neither won English Schools gold, so 200m runner Matt is the first in the family to achieve the feat.