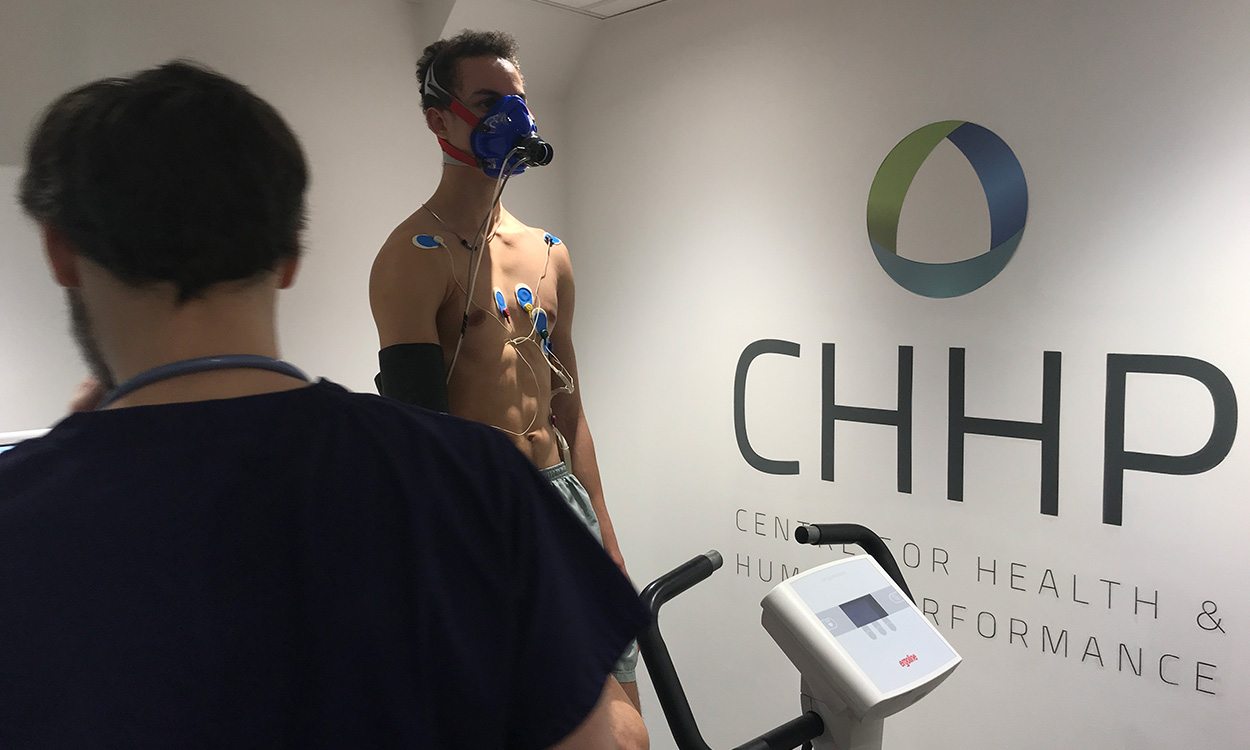 Four-hundred metre hurdlers have a great capacity to maintain and produce energy as they power round the oval and over 10 barriers.

AW went to find out how two exponents, Alex Hill (PB 60.87) and Tyri Donovan (PB 52.81) fared when they had a VO2max test at the Centre for Health and Human Performance (CHHP) on Harley Street. Both athletes are coached by Marina Armstrong. It also seemed like the perfect opportunity to take a close look at one of the most vaunted of all physiological tests.

What is a VO2max test?

Your heart and lungs are the engine of your cardiovascular system. Oxygen is taken into the body and fuels exercise (as well as a great deal more).

How much you can take in and use and for how long is a key determinant of your level of cardiovascular fitness and endurance ability.

A VO2max test pushes you to your maximum exercise intensity and then determines your cardiovascular output. It measures how many millilitres of oxygen your heart and lungs can process per kg of bodyweight in one minute. The higher the score, the bigger your aerobic capacity (although as we shall see there’s a lot more to it than that).

Why is it important?

Every single athletic event has an aerobic component. In the case of a 100m sprint, it’s not very much, maybe 5%, with the rest of the energy being supplied anaerobically (without the need for oxygen). Move up to the marathon and it’s basically 95% aerobic and 5% anaerobic.

Knowing what your VO2max is and then seeing it develop through appropriate training can indicate that you are doing the right training (VO2max can improve by as much as 30%).

This is particularly relevant for middle and distance runners (on and off track), where heart rate zone training is of upmost importance when preparing for the specific physiological requirements of a race and its distance. You’ll be much better able to calculate your training zones knowing your real VO2max and then run within targeted VO2max related zones.

About CHHP and their test

CHHP are the UK leaders in cardiopulmonary exercise testing and are promoting the “Stop guessing, start knowing” campaign.

This is designed “to empower the public to take control of their health and fitness and understand the science of their own bodies”.

Jim Pate was the CHHP physiologist in charge of the hurdlers’ test. He explained how the test would work on a bike (ergometer).

RPM would be monitored by the machine and computer and the key when taking the test would be to keep the speed over 60RPM and under 100RPM. (Note: it’s possible to calculate a running-based VO2max from a test done on a cycle – although ideally a runner should have a running-based test. Some research has indicated a 6.4% to 11.2% differential in VO2max between cycling and running).

Various electrodes were connected to the athletes and a mask to measure respiratory gas exchange worn.

All was monitored on a computer screen in real-time.

After the warm-up period the bike’s resistance systematically increases and therefore more power (energy) is required to keep the pedals moving. This obviously then puts more load on the CV system.

The hi-tech ergometer introduces it very smoothly. Pate explained that, when the resistance gets more and more difficult, the athletes should try to gradually increase speed.

“It’s a very clever bike, it will always change the resistance in regard to your pedalling speed to result in the desired wattage for the test protocol.”

Every minute the bike adds about 25 watts but it depends on the person who is doing the test.

Watching the test, the athletes – Alex and Tyri – were quite comfortable for about two-thirds, then uncomfortable to very uncomfortable for the last third as they worked really hard to keep going. Being 400m hurdlers no doubt gave them the mindset to push on.

When Alex – who was first to take the test – asked ‘what does it feel like?’ Pate answered: “It’ll feel like the hill’s getting steeper and steeper and you’ll eventually not be able to keep going.” He added: “You’re trying to make yourself work harder and harder.”

When the point of maximum output is achieved the test is over and VO2max is achieved (although it can be a little more complicated with the actual end point for an optimised value). At the end of the test, the resistance was dropped and the athletes had to continue to cool-down, a process which was also monitored.

The tester can see when lactate has cleared from the body and when the heart rate has returned to near base-line levels and blood pressure has settled down, for example.

Why is blood pressure monitored throughout the test?

It was also explained that it was important to consider the impact of blood pressure after the test and during the cool-down. There will be a drop in blood pressure inevitably caused by working to the maximum, blood will accumulate in the legs and it’s important that this returns to normal to ensure the athlete is not going to faint, for example, on standing.

The athletes had good results in-keeping with their events. Tyri’s VO2max was 49 ml/kg/bw/min and Alex’s 50ml/kg/bw/min. Given her event, weight and the obvious fact that she’s a female, this was a very good score (due to their lower muscle mass physiologically women usually score less).

We talked about whether knowing your VO2max could influence your choice of event and in many ways it could. You’d need a good natural (then trained) VO2max to be a middle distance runner, for example, where Olympic standard athletes would have scores of circa 80ml/kg/bw/min. However, there is more to it … lactate threshold and anaerobic power.

Pate explained how some recent tests with Premiership footballers had produced scores in the 60ml/kg/bw/min range and that this reflected their stop-start sport and need to run for 90 minutes and up to 10km per game.

Football is an activity that, especially for midfield players, utilises high levels of aerobic and anaerobic energy, hence the players’ scores.

They, like the hurdlers, are also more powerful and can, particularly on a bike, produce good power readings. Pate explained that some marathon runners, despite being very aerobic and therefore seemingly in possession of a high VO2max, can actually lose out due to their inability to produce power.

» Research indicates VO2max “ability” is very much hereditary, by as much as 25%-40%

» Trained female athletes generally score between 15%-20% less than men (Go Alex!). This is seen – everything else being equal – to be a consequence of the greater muscle mass of males and higher oxygen transporting haemoglobin levels

» Calculated VO2max scores i.e. from equations can be very inaccurate