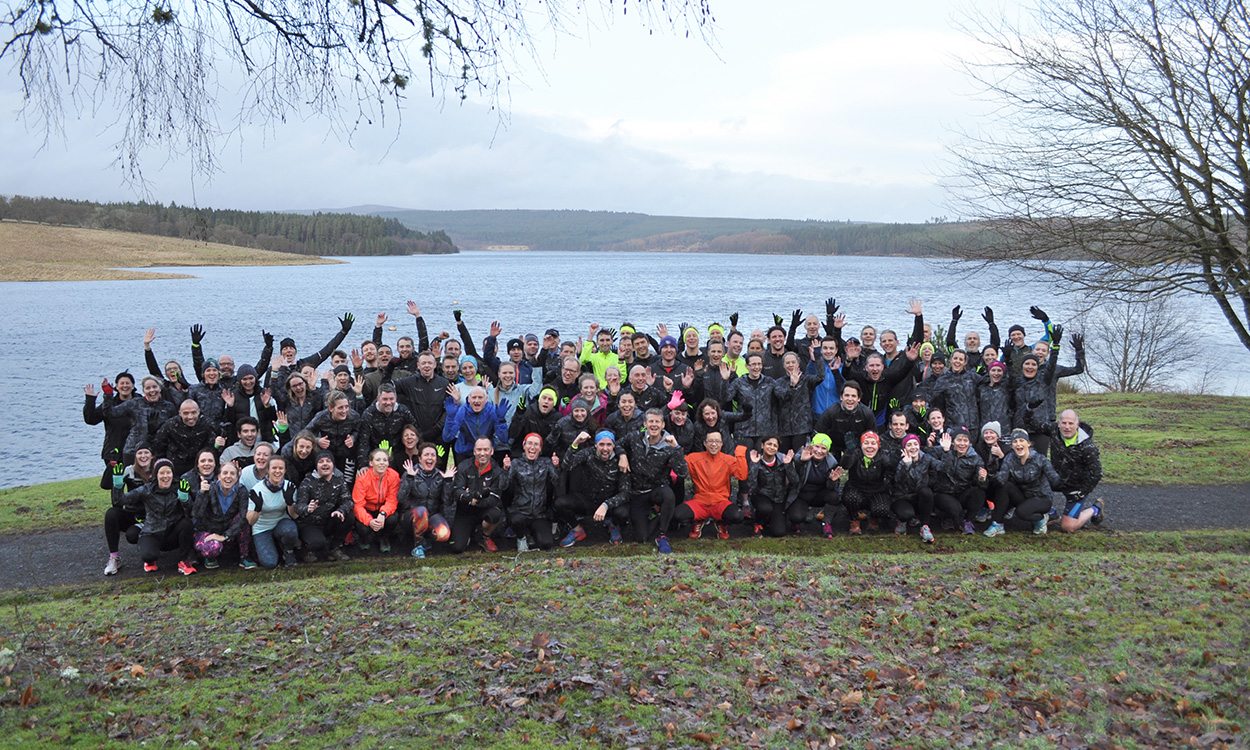 Bacon butties are no longer the warm-up fuel for world champion middle distance runners. Matt Long attends a Steve Cram training camp and finds out from a myriad of experts exactly what has changed

The athlete stops the clock at a staggering 3:46.32 to win the “Dream Mile”. It will stand as a world record for more than eight years. Thirty-three years later it still is the British and European record.

The athlete is of course Steve Cram. Now one of the voices of athletics on TV, I’m listening – with over 100 others – to his words in the largest manmade woodland in Europe, Northumberland’s Kielder Forest.

After inspirational talks about international representation in triathlon from BBC Breakfast’s Louise Minchin and The 401 Challenge from Helen Rollason Award-winner Ben Smith, here’s what I learned from the Jarrow Arrow.

In Cram’s biography, The Making of an Athlete, and prior to the 1984 Los Angeles Olympics he’s quoted with saying this about strength and conditioning (S&C): “Other types of training can help give you all-round body strength but running is specific and that’s one of the things in training which a lot of people tend to neglect. When you get out on the track nobody’s going to ask you to pick up a weight halfway round, nor to do 10 press-ups at the end of each lap”.

Three decades later, by his own acknowledgement, attitudes have changed. Cram introduces 2011 European indoor 3000m champion, Helen Clitheroe (pictured below), to enlighten and share how in her early career she used to attend Bodypump classes twice a week and that after her 2002 Commonwealth Games 1500m bronze medal she began to access specific S&C support via the English Institute of Sport in Manchester.

She’s convinced it had its benefits: “I was able to prolong my career and retire at the age of 40 due to the benefits I gained from doing some kind of conditioning work six out of seven days a week”. 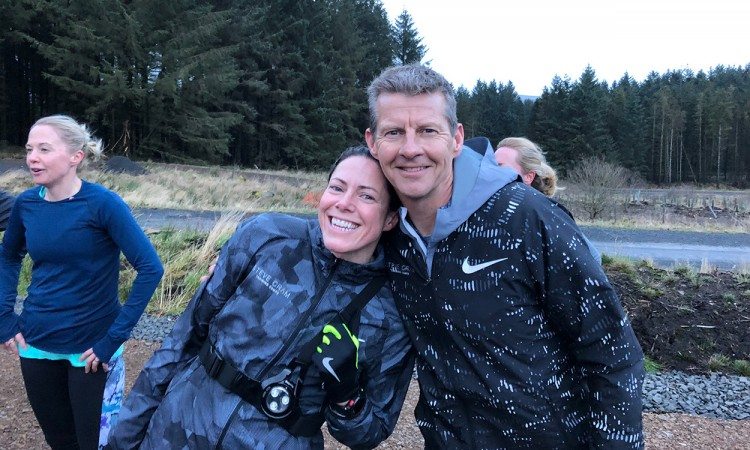 Back in the 1970s, Cram’s fundamental and foundational movement patterns were facilitated by his love of both football and basketball – the latter of which he reputedly kept up until the Moscow Olympics of 1980 where he made the 1500m final at the tender age of 19. Cram again acknowledges that practice has moved on and points to the value of drills.

Dane Mitchell, head of S&C at Leeds Beckett University, puts us through our paces. He explains that drills change the distribution of stress on our tissues. Then we head outside for hurdle drills led by Steve’s daughter Josie, who has recently hit the headlines as a Team GB duathlon representative.

Cram jokes about how Brendan Foster advised him to “Always pack a tub of jam butties” when travelling to race abroad. He shares another anecdote – the story of how 1966 Commonwealth marathon champion Jim Alder advised him to take chocolate biscuits and honey to the European junior championships back in 1979.

He goes on to make the admission that one of his favourite pre-track training snacks was nothing less than a bacon butty!

“I had a high metabolic rate” Cram points out, before adding “We didn’t have nutritionists as such back in my day. I guess I had a reasonable diet but we didn’t know about refuelling back then. It was just all fuel to me – it just went in to the body.”

At this point, head of sport and exercise nutrition at Leeds Beckett University, Louise Sutton, is introduced to speak about fuelling performance. The notion of “periodised nutrition” is articulated as a way to combat inadequate energy availability. We are given practical tips such as “eat a rainbow of fruit and vegetables” in an attempt to, “look after our gut”.

Weightman strategically uses jelly-based sweets for carbs as part of her much more optimised nutrition plan. In turning the clock back three decades, the man who also set 1500m and 2000m world records in a glorious 19-day-period in the summer of 1985 reflects: “I often suffered with kidney stones during my career and looking back I blame my hydration” and at this point Sutton implores us to “stay ahead of thirst”.

Cram suffered from compartment syndrome in his legs and routinely battled injury, even in the years when he achieved some of his greatest successes such as winning the inaugural world 1500m title in Helsinki back in 1983.

Along with Paula Radcliffe and Mo Farah he has sought counsel from chartered physiotherapist and sports scientist Paul Hobrough, who is clinical director of Physio & Therapy UK.

Back in the 1980s, Hobrough’s message about “prehabilitation” may have fallen on deaf ears. The former Team GB canoeist spoke about how things like tibialis posterior strength, hip flexor stretches and glute activation could all be achieved if woven into a daily lifestyle routine.

“You can do single leg squats while you are brushing your teeth in the morning” explained the author of the book Running Free of Injuries. 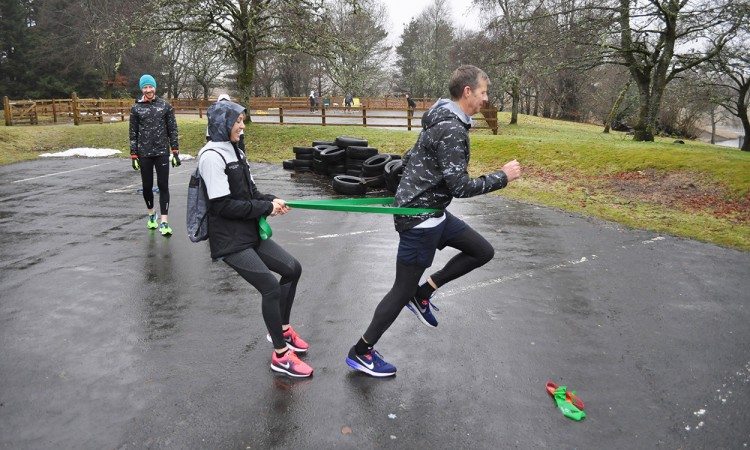 In introducing the afternoon session, the two-time European and Commonwealth 1500m champion warns: “With anything there is a generality but there must also be a specificity as well. It’s all about critical speed. In my day you had the ‘more is better’ philosophy, however, we’ve got to look at factors which actually make us better.”

He provides an example: “Back in the 1970s and 80s we used to call it oxygen debt but nowadays we are more sophisticated in talking about things like lactate turnpoint.”

This comment makes for a significant reflection in that, when at his prime, Cram’s endurance phase of his periodisation cycle occurred between October and February, where he averaged between 60-70 miles per week.

Despite his aerobic strength, he never aimed for target miles. The choice of “speed-play” for our sessions is therefore unsurprising, given that throughout his career the Los Angeles Olympic 1500m silver medallist relied heavily on park-based fartlek training. These sessions included hills of between 150m-500m, run as part of a continuous circuit, rather than orthodox hill reps.

The afternoon running session targets the aerobic and lactate energy systems as expected but the inclusion of short 40m hill sprints during the circuit is different. It’s noted how these work the alactic system. “I’ve seen Mo Farah do this kind of thing after a session in order to get his legs driving and knees lifting,” explains Cram.

We end the day with a sports massage and leave as coaches/athletes rejuvenated in body and mind.