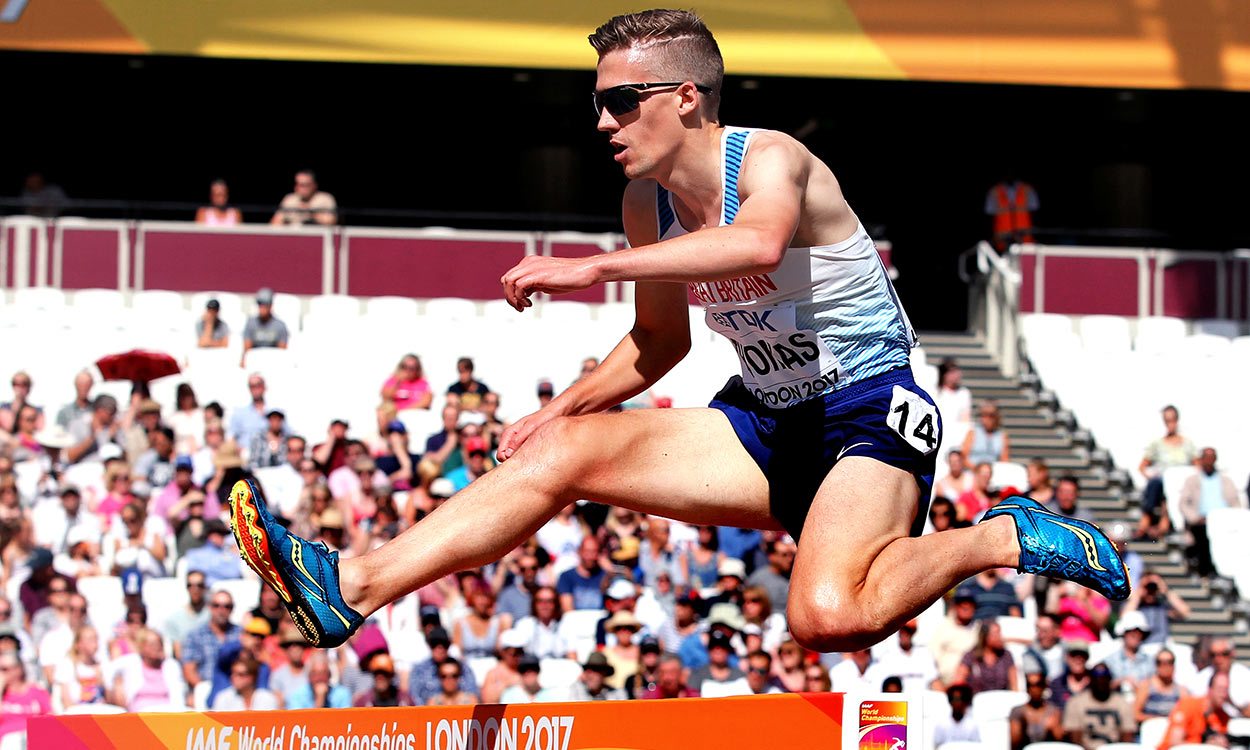 Could you be tempted by the steeplechase? Ieuan Thomas gives his advice for middle distance runners who are looking to rise to the challenge

Have you ever thought about trying the steeplechase? It’s a question I ask young middle distance athletes as I’m convinced many overlook it as a possible option.

I ran my first ever steeplechase race in 2012 at a BAL meeting for my club. I’d come through the age groups as an 800m and 1500m runner, but the chase had always had a mythical draw which is why I gave it a stab. There are many positives about the event – you don’t have to run the full distance and technical advances in hurdling can be pretty rapid.

Here’s the advice I’d give to any young athlete prepared to give it a go:

Learn to look for the barrier

This sounds simple, but it’s your number one rule. Unless you learn to spot the barrier earlier, you will lose fluidity and rhythm. You will stutter and lose speed (or velocity) as you hurdle.

Learn to use both legs

Every athlete has a favoured lead leg, but you really do need to learn to be ambidextrous. It was definitely the case with me and the only way to change it is to force sessions when you use your weaker leg. It’s been shown that steeplechasers who lead with the same leg every time need to make adjustments that are twice as large as those who can use either leg.

You can also maintain horizontal velocity and conserve energy if you learn to lead with either leg.

As you run towards the barrier, you need to accelerate. How much acceleration is needed depends largely on the pace of the race – the slower it is, the more you will need to increase your horizontal velocity.

You don’t want to change your stride pattern too much, so think about making these increases 2-3 strides out. This is a critical aspect of steeplechasing, but one that’s very hard to replicate in training. In a race, you are usually in a group and you simply can’t recreate those scenarios in training.

Steeplechase hurdling is not the same as sprint hurdling. There are some obvious similarities and I’d recommend anyone new to the event gets advice from a hurdles coach, but there are also subtle differences.

For one, it is a much less aggressive movement requiring less of a forward lean. If you lean into the barrier maximally, as a sprint hurdler might, you would just expend too much energy each time. What you’re trying to do is conserve energy with a good balance of economy and speed.

At take off, your ankle should be flexed (toes up) to help you avoid hitting the barrier on the way up. Your aim is to skim your lead leg over the barrier, so you need only a slight bend in the leg – it’s estimated that the leg should be bent at around 150 degrees.

But the higher you can get that trail knee during the flight, the better. Your trail heel needs to be tucked, knee bent, in a way that is similar to the sprint hurdler. This is crucial to help you avoid hitting the barrier on the way down, but it also means you can swing your trail leg through faster when you land.

Work on your landing

Looking back at pictures taken on the day I first tried the steeplechase five years ago, I can see how I was collapsing on landing, rotating as I came over the barrier. It was purely down to a lack of leg strength. It’s something I’ve focused a lot on developing.

You need to perform exercises that simulate the landing and that get the body used to the forces going through the body when you’ve come over a barrier. Think about it – you are landing from a height of six feet which puts an incredible amount of strain on your joints.

Try to land with your foot underneath your body which limits excessive braking. But you also need to develop leg strength specifically. Plyometric box jumps are great for recreating these kinds of forces, but I also do a lot of single leg exercises including single leg squats, single leg calf raises and Bulgarian split squats.

You need good hamstring and hip abductor flexibility to hurdle efficiently and the shorter you are, the more important the level of flexibility becomes. You really need to work on trail leg flexibility to ensure that you aren’t forced to jump higher than you need to.

I don’t devote any sessions specifically to hurdle technique, but towards the end of the indoor season I will start to build in hurdle drills as part of my warm up and drills. Gradually we will introduce barrier work to full sessions so that you get used to hurdling when fatigued.

It’s been suggested that running at race pace over barriers and a water jump increases energy requirements by 2.5% more than running on the flat. That partly explains why steeplechase times are comparatively slower than the same distance in the flat, but also underlines why you must practice for those obstacles and the particular challenges they bring.

One of the questions I’m most often asked is how on earth do you practice the water jump? It’s very easy to lose time at water jumps if you haven’t trained well for them and yet, frustratingly, they are hard to train for. Rarely are water jumps filled at tracks which makes it tricky to get any authentic practice in, but there are ways and means.

I often pull up a barrier in front of a sandpit as jumping over it into that soft surface is a good way to replicate it.

» Ieuan Thomas is a Saucony athlete and a member of Cardiff AAC. He is coached by James Thie (teamthie.com)