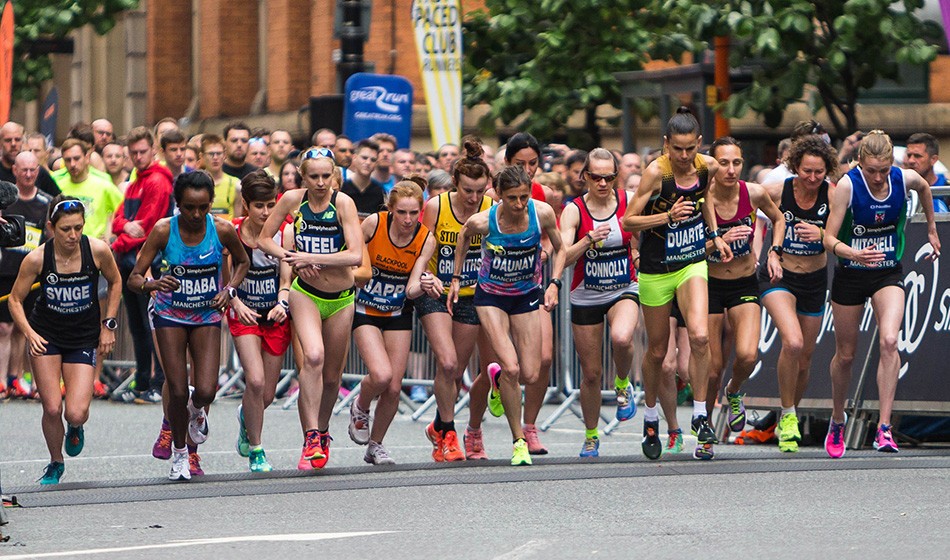 How athletes react can determine the winner of the 100m, yet not many would think it’s really that important in a 5000m or 10,000m contest. Dr Sean Carey believes it can be, however, and analyses Tirunesh Dibaba to explain why

Sir Charles Sherrington, the founder of modern neurophysiology, wrote: “To take a step is an affair, not of this or that limb solely, but of the total neuromuscular activity of the moment – not least of the head and neck.”

If that’s true for walking, it’s also true for running. Indeed, for most of us, how we take the first few steps into running will largely determine how the rest of the race is run.

If that sounds like too grand a claim let me provide some more details that might just convince you of its validity.

In my experience, one of the most common errors made by middle and long-distance runners is to focus too much on the forward direction at the start line.

That’s entirely understandable because, after all, the whole point of running is to move one’s body forward from point A to point B. However, the danger with an undue preoccupation with moving forward, especially when nerves are jangling, is that it can very easily lead you to overstride on the first few steps from the line. That pattern will likely frame the rest of your run.

How so? Well, any tendency to overstride on your initial steps from standing to running triggers an over contraction and compression of the hip muscles. Instead of your knees releasing freely and elastically out over your toes, they will tend to be drawn back and upward toward your pelvis.

Consider, also, that these unnecessary muscular actions will compress the space within the joints of your hips, knees and ankles (and even those in your feet). That can’t be good.

If that’s not bad enough, the upward compression in your legs and trunk will, in turn, initiate the action of the many powerful and essential core muscles that run the length of the spine from your tail-bone to the back of your head and support you against gravity. The result is that, even if you do stand tall at the start line, by overreaching on those first few steps you will interfere with your alignment and a posture that may never be regained as you run.

It’s worth your while checking how you run while training and in competition. To that end, ask your coach or a friend to video your starts and your subsequent running from sideways and head-on perspectives. You can then analyse the results.

If you routinely overstride don’t be surprised to find that, as you come forward and up out of your starting crouch to upright, you’re leaning or tipping slightly backwards at hip level – or, to put it slightly differently, you are lifting the front of your chest and arching or hollowing your back. (This sometimes correlates with heel striking.)

The overall effect is that, instead of maintaining a good, balanced head position on your neck and an optimum springy elasticity throughout your musculature (facilitating good forward momentum), that elasticity will be compromised.

What’s to be done? Well, it’s always useful to observe really well co-ordinated runners in action to work out the often minimal rights and wrongs of movement.

One of the best contemporary examples of co-ordinated running is provided by Ethiopia’s three-time Olympic and five-time world champion Tirunesh Dibaba.

She burst on to the scene as a 16-year-old, winning the 5000m at the World Championships in Paris in 2003, and has known little but success during her track career.

Dibaba is now, of course, giving her full attention to the roads and while it’s significant that Paula Radcliffe recently opined that the Ethiopian doesn’t yet seem to have fully embraced or come to terms with what racing 26.2 miles entails, there’s no doubt that, at shorter distances, she was one of the greatest.

How does Dibaba start?

If you get a chance, observe videos of how Dibaba begins her races – for example, the Simplyhealth Great Manchester Run 10km back in May.

Unlike some of her competitors, Dibaba does not assume a deep crouch at the start line. Instead she places her left leg forward, the toes of her left foot facing directly forward, knees slightly bent and only leans forward a little from her hips, being careful not to pull her neck down and forward, or round her back.

Although her front leg is weight-bearing, it’s also evident that she doesn’t put any undue pressure through it, which means that she’s not unnecessarily loading her ankle or knee joints.

On hearing the starting gun, most coaches instruct their charges to leave their front foot where it is and then step forward with the back foot before pushing off with the front foot (observation reveals that not all athletes follow this sequence – indeed, some move the front foot forward or forward and sideways a little before triggering the movement of the back leg. This by itself can very easily lead to overstriding).

In contrast, Dibaba moves her front foot backwards a few inches, simultaneously allowing her right leg to move forward. She accomplishes this movement without either over-reaching or landing heavily on her right forefoot.

It took me some time to work out, but the advantage Dibaba gains in moving her front foot slightly backwards as her rear leg moves forwards is that it sets in motion her characteristic rearward leg action in which her heels almost touch her sitting bones.

This latter aspect was spotted by coach Alberto Salazar, which he now encourages his athletes to emulate. In addition, within a few strides of the start, Dibaba has come to upright but in a way that uses the minimum of energy.

Her great skill in moving from a forward bend into an easy, economical lean forward is best seen from a sideways perspective. You can see that her whole body is lengthening forward and upwards from the pivot point of her ankle joints, and that is visibly reflected in the elegant carriage of her head on her neck.

Observe also that she does not lift the front of her chest, hollow her back or unduly tip forward her pelvis. This neatly demonstrates the principle, inferred by Sir Charles Sherrington at the start of this article, that biomechanically efficient running is not just about how, for instance, the feet make contact with the ground or move, but also how the head is poised and supported by the rest of the body.

Perhaps you can observe closely how you begin running to see if this can make your running more efficient.

There is something else. My guess is that if Dibaba were to be asked about her kinaesthetic feelings as she runs she would be able to explain subtle differences in the relative efficiency of how her body was moving, as well as her energy levels. Overall, she appears to me as an athlete who really listens to her body.

That might explain why, even though she always starts a race with the intention of winning, if she does experience severe, significant fatigue that can’t be shaken off – as in this year’s London Marathon – she quickly calculates there is no advantage in risking damage to her musculoskeletal system by struggling on to the finish. Instead, she slows down and stops. After all, Dibaba knows there will be other races to run.

» Dr Sean Carey is a social anthropologist and a member of the Society of Teachers of the Alexander Technique (STAT). He teaches the technique in London’s Old Street and St Albans and can be contacted through the STAT website (alexandertechnique.co.uk). For more information on running you can read his book Alexander Technique in Everyday Activity: Improve how you sit, stand, walk, work and run (Hite; £14.99) which is available to order here