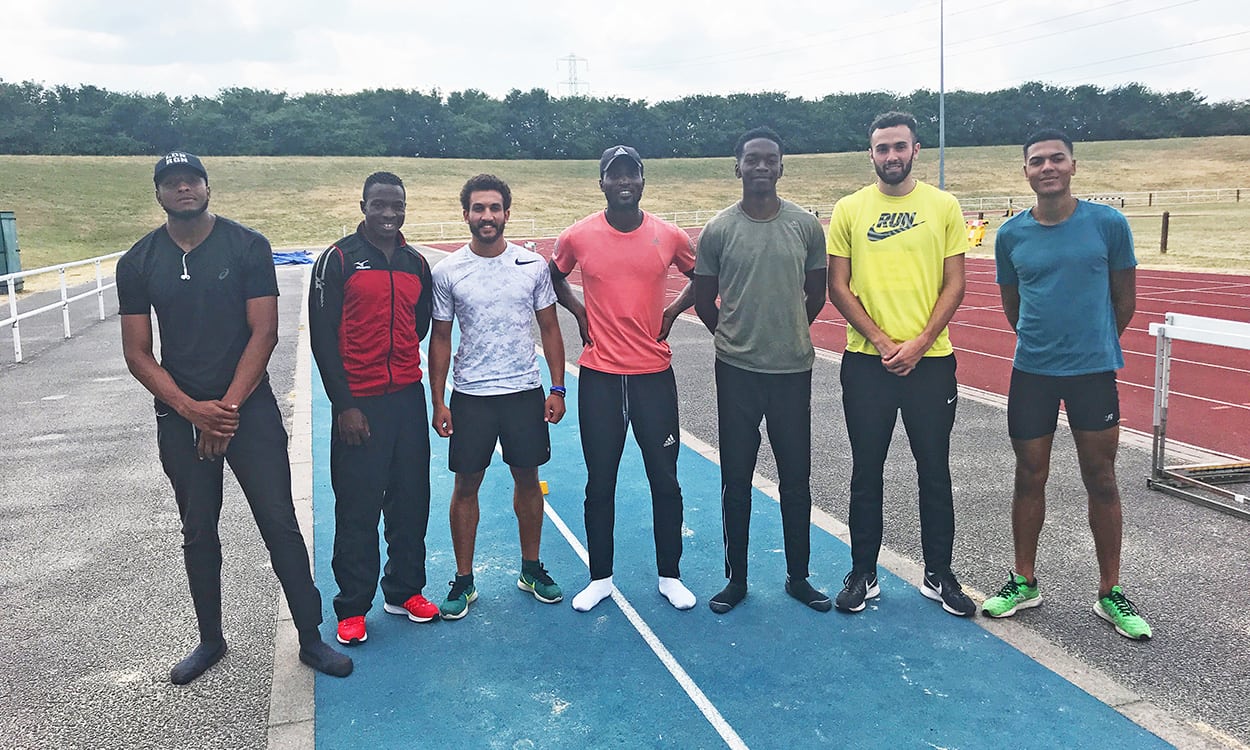 Can you put on an accredited meeting in just over 48 hours? John Shepherd has a crack at doing just that

As a coach or an athlete, have you been frustrated by the fact that there is not a competition scheduled or one local enough that caters for your event and your level of performance? Something similar happened to me so I decided to put on a triple jump meeting in just over 48 hours.

One of the jumpers in my group, Jonathan Ilori, had placed third in the Müller British Championships and, like a number of others in that field, had a chance of gaining selection for the European Championships. Only one athlete, trials winner Nathan Douglas, had achieved the 16.60m required in the relevant time period and the closing date for performances to be considered was July 22.

Ilori had managed to find, by his own efforts, a meeting in Spain – this in fact was the Spanish national champs, and we were building up nicely toward it in the week before the meet. The actual competition took place on the evening of Saturday July 21. Then on the preceding Wednesday his entry was pulled – like most of the European federations holding their national champs over that weekend, the Spanish decided to close their competitions to overseas athletes.

This was incredibly frustrating. You have an athlete who might make a major team and yet there are no meetings for them to try for qualification. I’d experienced this before – and, as I discovered, so had many coaches across a number of events.

At the elite level with two Diamond Leagues in procession (Monaco and London) from Friday through to Sunday (July 20-22) – there were some great opportunities for GB athletes on the cusp of selection to stake their Berlin claims, although not all were afforded a lane or an event to try for selection even if they had achieved the qualifying standard.

However, for what can be called the “sub-elite” there seems to be much less thought placed on “what happens next?” That’s to say there were seemingly few meetings available and probably not a senior triple jump one on the last weekend in the UK before the selection period ended. It would make sense post-trials that a meeting were held whereby athletes who had not made the European team automatically but had a chance making it – notably the third placers in that situation, were given an opportunity.

Many of the elite, as noted, had their chance at the Müller Anniversary Games, but there wasn’t a triple jump and Ilori and our other top guys, Nathan Fox and Michael Pupamplu, for example, had no opportunity to try for the qualifying distance.

Triple jump meetings can be difficult to source at the best of times and, although it’s true to say that the event is currently not one of our best, if the high-level comp opportunities are limited then that’s a factor influencing this state.

Let’s do it ourselves

I thought ‘let’s put on our own “invitation” meeting’. Can’t be that hard, can it? You need a track (pit actually, so less to worry about) some judges, some jumpers, a tape measure and a bit of effort.

Well, it’s not quite as easy as that, as I found out. I checked what was required in terms of meeting accreditation to meet the selection policy and a Level 2 standard meeting (area champs, Loughborough International level etc) was necessary. Level 3 meets are at IAAF standard.

This level initially needed a field referee (Level 3 minimum) plus four officials per event at any one time and a clerk of the course. I went in search and found that most officials of that level were being used at the Anniversary Games and those that weren’t were dotted around at Youth Development Leagues and the like on the weekend. Fair enough, as “our” comp was a spur of the moment idea.

It was then decided to organise a Level 1 meeting – where two Level 2 judges at minimum, plus helpers, are required (Level 1 meets include area leagues, BMC events and county champs, for example). I found out the info from the relevant section on the UKA website – uka.org.uk/competitions/track-field-licensing – and after being told where to look by fellow jumps coach Keith Flemming – whose athletes would support the event. I completed the forms and sent them off, seeking that Level 1 meeting*.

I will say that the selection process for the European Championships requires performances to be made in Level 2 events – but it was thought that at least by having a competition there would be a chance to jump in excess of the standard – and if it was achieved, well, you never know … It was also an opportunity to get some of the top triple guys together and provide a well needed run-out prior to the following week’s England Championships in Manchester – July 28-29.

The application was well received and expedited very quickly (thank you, powers that be). On Friday, I proudly had my meeting certificate! Some criticise the “bureaucracy” of UKA – and no organisation can be exempt of criticism – but the stops were certainly pulled out.

Getting a field together was actually the easy-ish part. Through the social media athlete grapevine we tweeted and whatsapped and managed to get seven athletes, three of whom were in the top six in the country. More would have turned up, too, with more notice. There were even enquiries about putting on a women’s event. 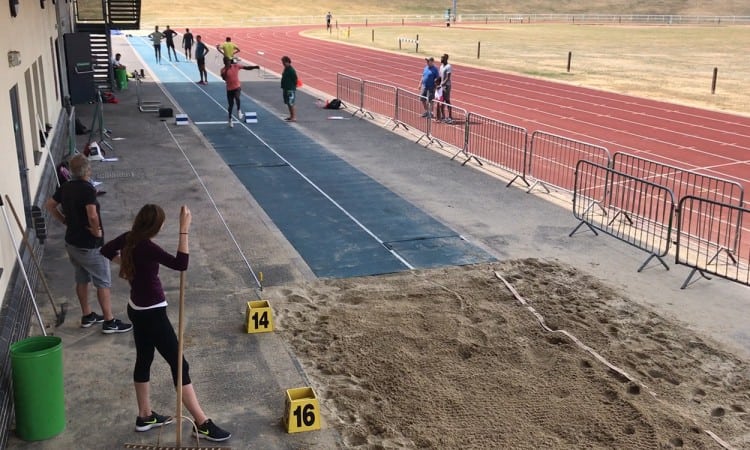 With Ilori, the field included Puplampu and Fox. We also had Chuko Cribb and Rob Sutherland, both good standard jumpers who wanted to compete in a quality field. Our invitational also had an international flavor, as it included an Egyptian!

Abdelrahman Sayeed had come over for a month to train with my group and although a long jumper, his arm was twisted to have a go.

Alex Williams-Baffoe from my group competed. We worked with Sutton & District AC and Everyone Active and additional thanks must go to John Vernon, who as well as being a Level 2 field judge, helped with getting other judges on hand and the venue.

When I was still pursuing the Level 2 meeting idea, I had thought that the standard and number of officials needed was a tough ask for one competitive event, however, in the process of the meeting’s birth, event licensing contacted me and were prepared to have just one high level official for the meeting… but required an Electronic Distance Measurer (EDM). This news was delivered on Thursday at 4.30pm … I went home to have a lie down.

But AW came to my assistance and provided details of a company that supplies such equipment for the Great CityGames series of street athletics meetings (part of The Great Run Company that publishes AW).

I made contact and believe it or not could have had an EDM supplied and staffed for the day. However, due to not being able to find a suitably qualified high-level judge, we as noted decided to host a Level 1 event – at least we know now where to secure an EDM in future. We did have a wind gauge.

What happened on the day?

We set the pit up and tried to make it as good a competition as possible. The seven athletes all turned up, and in old-school fashion lots were drawn to decide jumping order. 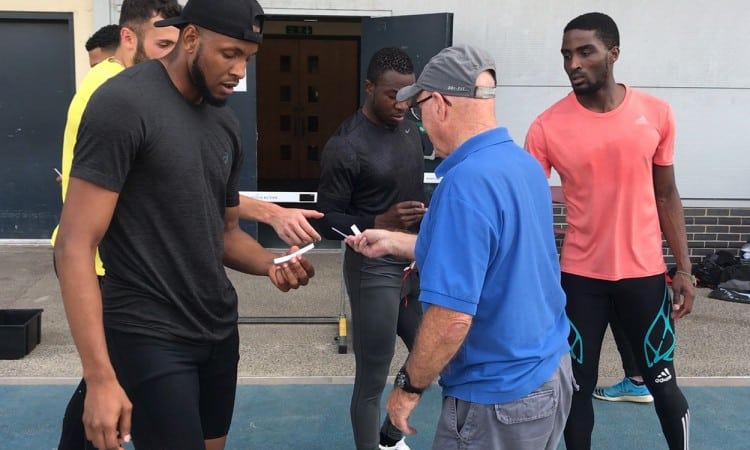 The top three performed creditably and the third round saw Ilori leap 16.07m, which turned out to be the winning jump.

Puplampu had gone out to 15.86m earlier in the third and Fox – on the return from an injury sustained at the Commonwealth Games – came in third with a jump of 15.81m. Not a bad competition then.

Was it worth it?

Well, a qualifying standard was not achieved (and it probably would not have been ratified if it had, due to the level of the meeting). However, in terms of helping athletes who were looking for a comp it was a success – and also in terms of awakening the potential among other coaches that it is possible to run your own specialist meeting.

We’ll be certainly sitting down to look at putting on a jumps meet or two next year, and will be paying particular attention to the period after the what will be world trials – in case a competition is required by jumpers, and there’s not a relevant domestic opportunity scheduled.

I’d encourage field event coaches in particular to think about putting on their own meetings from time to time to act as a focal point perhaps for their area. Make your event the star!

Why not contact some local coaches and see what you can do? You may well be able to do something slightly different and innovative and plug a gap that’s missing in the wider structure. Some could say that this is the job of the national governing body – in some ways and at certain levels it should be the case – but it’s not possible to provide all that’s desirable. DIY meets, pop-up meets, “flash” meets … who knows what we, the athletics community, can come up with!

» Special thanks to all those who helped get our Invitation Triple Jump Comp off the ground – they include Sutton & District AC, LDN RGN, UKA T&F Event Licensing, Everyone Active, Keith Flemming, Tony Ganio, Colin Rawlins, Kola Adedoyin, John Vernon and of course the jumpers and helpers

* Note: the standard requirement for a license is eight weeks before an event, to allow effective planning and inclusion on fixture lists – see uka.org.uk/competitions/fixtures/ – where a published list of events is available and updated throughout the season. This meeting, due to the deadline for the European Championships and the lack of triple jump competitions, was expedited specially.