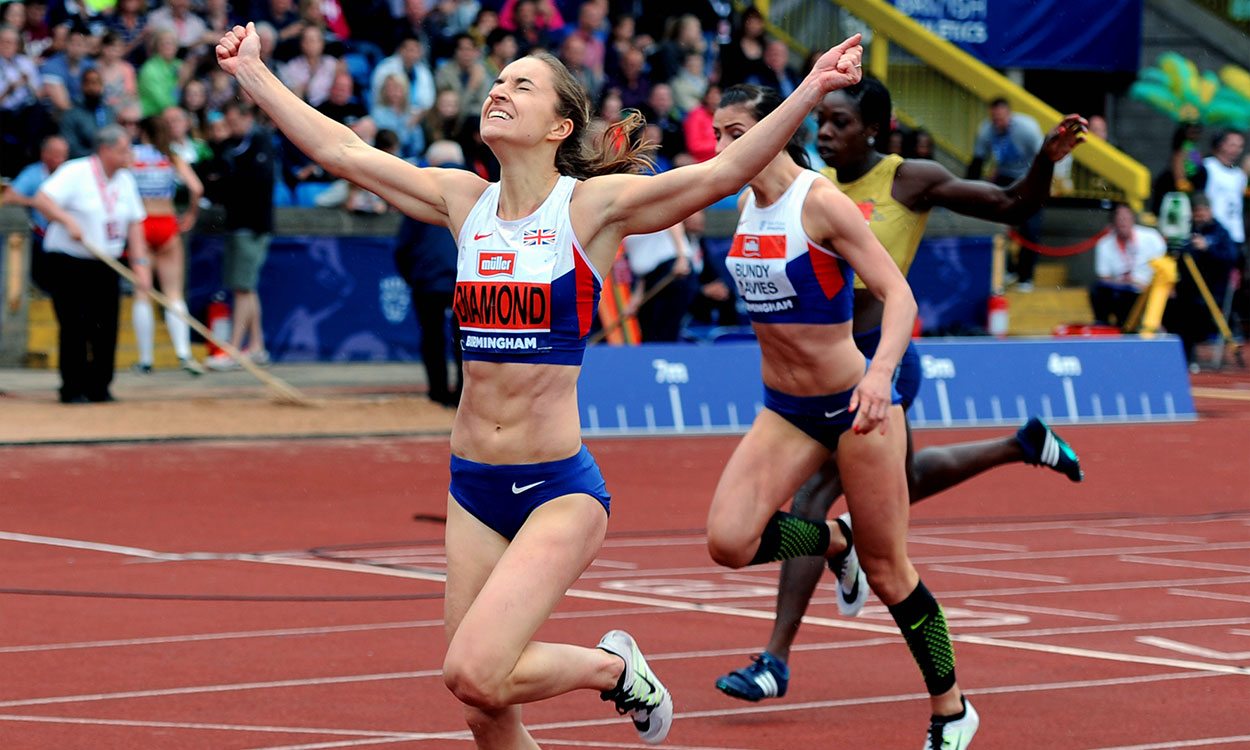 After winning the British 400m title, Emily Diamond took Olympic and European 4x400m medals in 2016 and she spoke with AW about her life as an athlete

I was so nervous before the British Championships and Olympic Trials last year. I had finished third in the trials in 2014 and didn’t get selected for the Europeans despite having the qualifying time, so I really didn’t want to be in that position again. I knew I needed to be in the the top two this time.

I was in the best shape I had ever been. I had run a big PB of 51.23 two weeks before the trials, so my nerves were mixed with confidence. My coach Jared Deacon and I had planned the weeks leading up to the trials and we had tapered my training down with the target of finishing in the top two at the trials.

Winning the Olympics Trials was the best day I have had as an athlete. The feeling of knowing you have qualified for the Olympic Games as an individual athlete is amazing. It’s difficult to put that feeling into words and it was a while until I had stopped smiling.

I currently train at Bath University alongside James Hillier’s group. I have a slightly unusual training set up, as my main coach, Jared, is based in Edinburgh, where he works as the strength and conditioning coach for Edinburgh Rugby. Jared writes all my training schedules and James oversees them. It appears to be working so far.

I like a routine. I went back to Jared, who was my coach while I was at university in Loughborough, and I also started
a job working at Prior Park College in Bath. I adopted the routine of working in the morning, then going straight to the university to train once I had finished.

I know my body a lot better than I did in the past. I am a little older now and more experienced and this allows me to manage any niggles and control them before they become injuries. I also improved my diet last year which I think massively helped with keeping my body healthy and in one piece.

You soon forget the tough times. Although there are several training sessions in the winter when I’m curled up on the side of the track in the dark and sometimes in my own vomit – 400m training is far from fun at times, and certainly not glamorous – the moments of glory in the summer season make it all worthwhile.

Jared and I had spoken about my future as a 400m athlete back in 2010. At the time, I was predominantly a 200m athlete, but he could see that I had potential over that distance. I was roped into the 4x400m team at the last minute at the World University Games in 2011 and ran faster than expected, so we decided I would run a few individual races in 2012. I qualified for the 4x400m for the London 2012 Olympics after finishing fourth at the Olympic Trials, but unfortunately didn’t get chosen to compete on the track in London.

I found it difficult finding an employer willing to employ an athlete who may have to be away for weeks at a time for competitions and training camps. I currently work as the sports department administrator at Prior Park College in Bath and they have been so supportive. The school is about 5-10 minutes from the university, so it makes it convenient for day-to-day training, but they are also very supportive if I need to miss days for other reasons.

I absolutely love baking. But I don’t have a lot of time for it these days. I do take my bakes into work with me so I’m not tempted to eat a whole cake at home by myself. I like to sew and made some cushion covers for my flat as well as a jacket.

This year I want to get a medal as part of the 4x400m team at the World Championships in London. Every athlete wants to run a PB each year, so if I can run another one in 2017 and hopefully dip under the 51-second barrier, I’ll be happy.