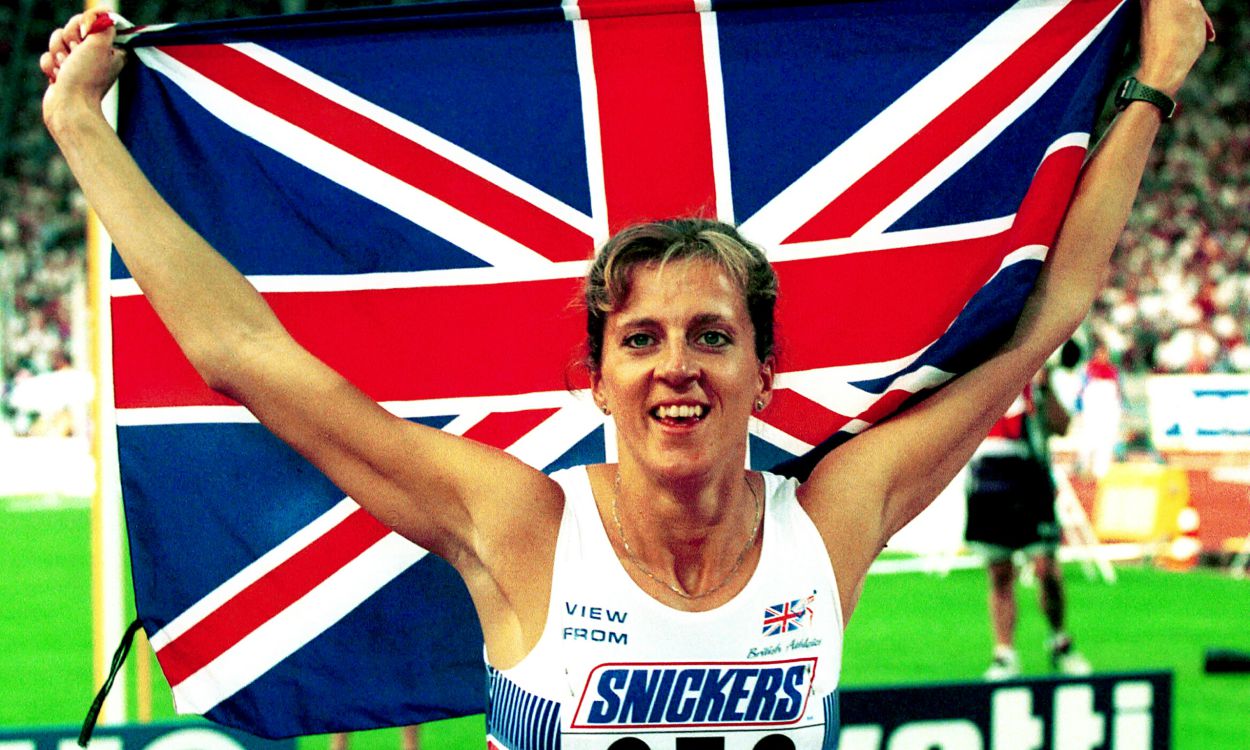 The year after a superb 1992 Olympics in Barcelona saw another top-class meeting with plenty of British success and fantastic athletics.

The sport was growing globally, with 20 more countries and 172 more athletes competing than in Tokyo, while the event attracted big crowds – almost 50,000 people attending every evening session.

Every winner won a Mercedes and the likes of Sergey Bubka, Merlene Ottey, Carl Lewis and Jackie Joyner-Kersee all achieved various medal-winning records. After battling with the Soviets in previous Championships, USA dominated and won 10 more gold medals than anyone else.

For 150 metres of the 200m, it looked like Britain might win another title. Just as in 1987, John Regis was ahead and looking good. His 14.93 clocking was the fastest electrical time for the distance. However, Frankie Fredericks, who had been second in Tokyo and Barcelona, produced his usual storming finish – 9.46 for his last 100m – and won by a metre in an African record 19.85 from Regis’s UK record 19.94.

In third, Carl Lewis won a record 10th world medal and become the first runner to break 20 seconds yet not finish in the top two.

USA did win the 400m, though. Michael Johnson ran splits of 21.65 and 22.00 and  his 43.65 was the third-fastest ever. World record-holder Butch Reynolds was a clear second in 44.13. Olympic champion Quincy Watts could only finish fourth, largely due to the fact that the sole of his left shoe broke in the race.

In the 400m hurdles, Barcelona gold medallist Kevin Young bounced back from some pre-Championships defeats with a brilliant 47.18.

USA also won the 4x100m, even without Lewis. However, after a 37.40 semi-final to equal the world record, they disappointingly produced a ‘mere’ 37.48 in the final.

The Americans made no mistake in the 4x400m as they smashed the world record with 2:54.29.

Many expected Billy Konchellah to breeze to a third successive 800m title. However, over-confident, at 600m he was last and over a second behind the leader, Kenyan third-string Paul Ruto, who was seemingly there to set the pace.

Konchellah ran the fastest last 200m but fell over a metre short of Ruto in third, with Italian Giuseppe D’Urso second. Curtis Robb was fourth as world indoor champion Tom McKean failed to live up to the form of his winning semi, coming last, just behind Olympic champion William Tanui.

Noureddine Morceli had suffered a shock defeat in the Olympics but made no mistakes in the 1500m as he blasted a 50.64 last lap to win easily from Barcelona winner Fermin Cacho and defending champion Abdi Bile. Matt Yates was sixth.

The Ethiopian went one better in the longer event, this time with a 54.98 last lap, and took the title from Moses Tanui, who lost a shoe when his rival trod on his foot. Tanui angrily remonstrated with Gebrselassie after the race as he had continually clipped his heel and refused to lead.

There was also a late rush in the marathon as South African-born Mark Plaatjes, running for the USA, made up 90 seconds on Lucketz Swartbooi after 35km to catch him with around a kilometre to go.

African-born athletes won every endurance run as world record-holder Moses Kiptanui, who had missed Barcelona, retained his title in a fast 8:06.36.

Europe dominated both walks. In the 20km, Valenti Massana moved from fifth in 1991 to take the title, having being disqualified from Barcelona while in a medal position. Spain also won a quality 50km, Jesus Garcia recording a national record.

Just as in Tokyo, there was another superb high jump competition, with seven athletes still competing at the height of 2.37m.

World record-holder Javier Sotomayor defended his title with a 2.40m leap and Steve Smith won a bronze with a first-time jump at 2.37m.

Mike Powell was another defending champion who won a moderate competition. He produced 8.43m and 8.59m in his last two jumps.

The one new world champion in the jumps was the Olympic champion Mike Conley in the triple jump. Having been fourth, second and third in the previous championships, Conley jumped 17.86m and 17.77m with his last two attempts. Jonathan Edwards, with a lot more to come, was third with 17.44m.

The throws also had a sense of deja-vu, with Werner Gunthor winning his third successive shot title thanks to a big 21.97m, ahead of returning drugs cheat Randy Barnes. For the second successive Championships, a shot competitor failed a drugs test, with Mike Stulce’s 20.59m being erased from the records.

Lars Reidel won the second of his five successive discus titles thanks to a second-round 67.72m.

In 1991, Andrey Abduvaliyev was fifth in the hammer for the Soviets but was competing for Tajikistan this time round and easily won Asia’s first men’s world title at any event with a throw of 81.64m.

Dan O’Brien retained his decathlon title with a top-class 8817. He was given a good challenge by Eduard Hamalainen, who scored 8724 to go seventh all-time.

After just losing the 100m (see ‘most exciting contest’), and in her eighth attempt at a world title, Merlene Ottey finally won a gold in the 200m, 13 years after a bronze at the Moscow Olympics in 1980. It was close, though, as she held off a charging Gwen Torrence by 0.02 of a second.

Gail Devers made it a double gold in Germany as she won the 100m hurdles easily. USA didn’t win the 400m hurdles, though (see ‘British team performance’).

Devers was expecting to win a triple at Stuttgart as she ran the last leg of the 4x100m but Irina Privalova held her off in another close finish as Russia got the verdict, with both teams timing 41.49.

USA gained revenge in the 4x400m, Torrence opening with a superb 49.0 leg. Privalova, anchoring her team to second, ran the fastest leg of 48.47.

Maria Mutola followed the fast 55.49 opening lap and then kicked away easily to win the 800m by 15 metres with a top-class 1:55.43. Diane Modahl finished fourth.

The other track races were dominated by Chinese athletes. First off was the 3000m, in which Qu Yunxia led a clean sweep of the medals. She produced a fast last kilometre and won in 8:28.71.

Asia also won the marathon, with Junko Asari running a strong final 5km to win by just under a minute. Finland won the 10km walk with Sari Essayah, third in 1991, gaining victory by nine seconds as Europe took the first 15 places.

The high jump was a poor competition, with Cuban Ioamnet Quintero the sole jumper over 1.99m. The long jump was slightly better, with Heike Drechsler producing four seven-metre jumps while no one else managed one, to regain the title she won as a teenager ten years earlier.

Anna Biryukova failed to make the final in that event but she also competed in the first-ever triple jump final. In her first season she shocked everyone with history’s first 15m jump (15.09m).

Olga Burova dominated the discus with the best three throws while Norway’s Trine Hattestad made up for a poor big event record by winning the javelin courtesy of a 69.18m opener.

Jackie Joyner-Kersee chose not to defend her long jump title and, not at full fitness, was given a scare in the heptathlon.

A 7.04m long jump gave her a good lead but she dropped behind after her main rival Sabine Braun threw ten metres further in the javelin (53.44m). The 800m was close until the last 300m, when Joyner-Kersee broke clear to beat the German by three seconds and score a 40-point victory. With her long jump successes, it was a record fourth women’s world title.

Olympic champion Gail Devers had won by a hundredth of a second in Barcelona, but it was down to just a thousandth in Germany as the American beat Merlene Ottey seemingly by a double dip, putting her shoulder a fraction ahead.

Britain performed brilliantly in Stuttgart to finish fourth in the medal table.

Colin Jackson, who faltered in Barcelona and finished seventh, had his greatest-ever 110m hurdles race. He led all the way and took 0.01 off Roger Kingdom’s world record with a spectacular 12.91. Behind him Tony Jarrett took second with 13.00, taking 0.13 of a second off his PB.

Sally Gunnell (pictured) also set a world record but she had a harder race in the 400m hurdles, which many thought was one of the best ever contests.

Sandra Farmer-Patrick went off fast and was clear at 200m before Gunnell closed on the bend. The American went away again and took the last two hurdles better but the Briton fought back and edged it, winning in 52.74 to her rival’s 52.79. Both went inside the old record.

Another Olympic champion, Linford Christie, didn’t break a 100m world record but he was close as he set a new European mark of 9.87 to catch fast-starting Andre Cason. His time was run with a 0.3 tailwind compared to Carl Lewis’s 9.86 with a more favourable 1.2 wind.

Christie joined up with the two hurdlers and 200m silver medallist Regis to take a 4x100m silver.

Colin Jackson was the 1993 IAAF athlete of the year but, curiously, the European and various British awards went to Linford Christie. Jackson won a further world title in 1999 and also won a world indoor title, Olympic silver and four European and two Commonwealth golds.

His one blot was the lack of gold which some say stops him from being an all-time great. Jackson’s record though is far superior to the vast majority of Olympic champions. He still holds the world indoor record and certainly is higher regarded than the likes of Mark McKoy, who won gold in Barcelona.

» This feature was first published in the March 9 edition of AW magazine, which is available to buy and read digitally here and includes further Stuttgart 1993 stats plus a list of champions. Other IAAF World Championships history features can be found here