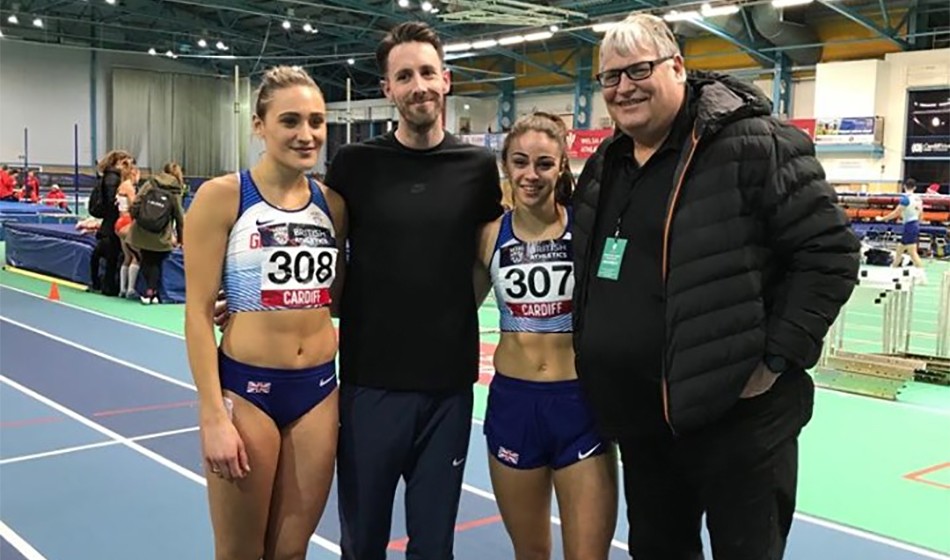 Next weekend’s British Milers’ Club Virtual 1km Time Trial is raising money for the Ron Pickering Memorial Fund (RPMF) and in the first of two pieces, event organisers Steve Green and Matt Long sit down with Shaun Pickering (pictured above, right) to learn why the charity is such a worthy cause for those running.

We start by asking what specific problems the RPMF is facing as a result of the pandemic and lockdown. The son of the late, great BBC commentator Ron (pictured, right) responds candidly.

“The Ron Pickering Memorial Fund has always operated in two main areas in terms of support to young athletes,” he says. “The first is our annual grants, which we have awarded in January each year since the Fund was established in 1991, following the death of Ron Pickering. It continues his support of young athletes and provides reasonably small awards, usually between £100 and £1000 per grant, to young athletes aged 15 to 23, with talent and need.

“We have a small group of five or six trustees that review each of the up to 650 applications that we receive each year and then we sit together and over the course of eight hours or so, try to determine who we are able to help and at what level.

“This is a very difficult process and our annual grants each year, which could number as many as 225 individual grants, is limited to available funds each year, and this comes solely from our fundraising activities around the London Marathon where we have around 25-30 ‘Ronners’ who raise money for us through sponsorship from friends and neighbours.

“Obviously, this year there is a real danger that the 2020 London Marathon may not just be postponed until October when some, but not all, of our ‘Ronners’ are ready to run for us and raise money, but it could still be cancelled and that would leave us in dire straits in terms of our regular grants for 2021, and the number of athletes that we are able to help.”

As well as honouring the legacy of his late father, the 1998 Commonwealth Games shot put bronze medallist is keen to stress how the tireless work of his late mother is still making a contribution.

“We also support a small number of athletes with significantly larger grants for a longer period of time, which we call the Jean Pickering Olympic Scholarships (JPOS), in honour of my mother, Jean, who passed away in 2013 and had driven the RPMF since its inception in 1991,” he says.

“At this time we have six JPOS recipients that we have been supporting for the past three years towards their goal of reaching the Tokyo 2020 Olympic or Paralympic Games.

“These include athletes such as Niamh Emerson (pictured top, left) and Tom Gale, who few would have known when we selected them in 2017, but have made a great impact since, thanks in part to our support.

“We have run a similar scheme going back to 2004 when Perri Shakes-Drayton and Steph Twell were among our first recipients, and we were particularly successful in London 2012, where we supported athletes like Robbie Grabarz, Andy Pozzi, Holly Bradshaw and Sophie Hitchon at an important point in their development.”

Pickering is clearly concerned about the immediate future and adds: “Our support to the current six JPOS recipients runs out at the end of June, 2020, as the Tokyo Olympics were scheduled for July 2020 and we do not have the resources to continue our support, even though we would like to.

“Any financial support for the JPOS scholarships comes from fundraising activities outside of the London Marathon fundraising, so that we ‘ring fence’ our RPMF grants that the Fund was built upon, so these JPOS grants can only go forward if we have other sources of income, such as proceeds from raffles at BASC, England Athletics Hall of Fame Dinner and any general donations to the RPMF, or any commercial partnerships such as during the lead up to London 2012.”

We move on to ask what he would ideally like to be doing right now to help athletes being supported by RPMF.

As well as crediting the invaluable work of Jo Jennings-Summers and Richard Hughes, a former publisher of AW, the 1996 Atlanta Olympian says: “Our six JPOS athletes have had to refocus for 12 months ahead and we would love to be in a position where we could extend our quarterly grants to them for that 12 months, so they can continue to prepare safe in the knowledge that their key expenses are covered by the RPMF, which could be their rent, or support to them and their coaches on specific training camps or competitions that they need for their preparation.

“This can only be done if we have some extra sources of income at this time.

“We do not know what will happen with the London Marathon this year. Our ability to award grants to our normal level could be impacted not just for this year, but also next year. If we have funds available we may also look to support some competition opportunities when this coronavirus crisis is finally behind us, hopefully this year, as we are always following the results of young athletes each year to help us decide who to support.

“Also, we feel it is important that the young athletes have something to look forward to at some point this year, as they have worked hard all winter and need the opportunity to show what they are capable of.

“The primary goal of the RPMF is to keep talented athletes in the sport and not be lost to other draws on their time because we know the value that this sport can have on a young person’s development, not just in sport but in life, so they need something to look forward to after this is all over!”

The British Milers’ Club Virtual 1km Time Trial is taking place on May 22-25 and while entry is free, participants can donate to the RPMF at justgiving.com/fundraising/bmc1k

Entry is open at data.opentrack.run/x/2020/GBR/bmc1k until May 19 or when the limit of 1750 participants is reached.

Among those supporting the virtual event is the British Milers’ Club male athlete of the year, European and Commonwealth 1500m bronze medallist Jake Wightman, who said: “1000m is a great middle ground to combine the speed of 800m running and the strength and endurance of the 1500m.

“It’s becoming a much more relatable distance with many runners choosing to train in kilometres over miles.

“Good luck to everyone giving it a go and enjoy the lactic!”