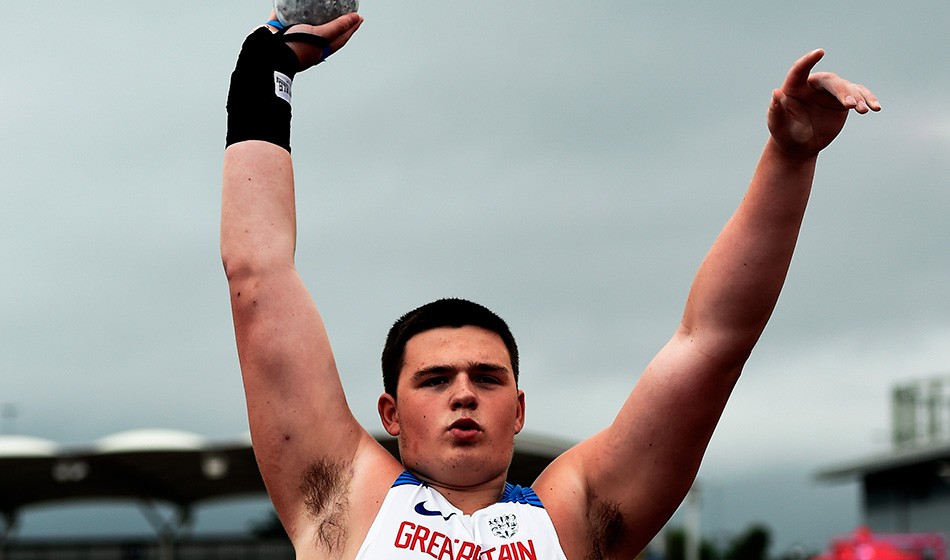 If his season opener and winter training is anything to go by, Lewis Byng looks set for a strong year and one which he hopes will include a global medal.

The 18-year-old added almost half a metre to the British under-20 indoor shot put record with a throw of 19.18m in Loughborough at the beginning of the month but admits a slight frustration that he didn’t throw even further, with his bigger opening attempt judged to be a foul.

With a previous best using the 6kg junior shot of 19.14m recorded outdoors last year, Byng added more than a metre to his old indoor PB as well as 49cm to the previous UK indoor record set by Jamie Williamson in 2006.

“Throwing a big opener was really nice. I am happy that I got the British record, my aim going into that competition was minimum to get that,” he says.

“I had a dodgy indoor season last year where I didn’t throw as well as I wanted to but I made it for outdoors. The fact that this indoors, my first comp, I’ve thrown a British record, there’s more to come.”

19.18m u20 British indoor record. Nice start to season warmed up with 20+ and threw two in competition so it’s all there! Let’s have a good year 2020 is the year! #shotput #javelin #discus #hammerthrow #deadlift #cleanandjerk #squat

After making the finals at both the European under-18 and under-20 championships in 2018 and 2019 respectively, Byng’s next big aim is the World Athletics U20 Championships in Nairobi in July. That journey to Kenya will take him via Singapore, where he has been offered a place on a 10-day training camp in April, and Byng undertook a novel fundraising challenge in December to help get himself there.

His coach Stuart Carlaw organised a sponsored weight lift of 6,764kg in a morning session, with that figure being the distance in miles from one of his training bases in Northampton to Singapore. Given Byng’s lifting experience he upped the challenge to lift the distance of a return journey – 13,528kg.

“I feel like if I can get to July and peak properly then I’ll have a really good chance of getting a (world U20) medal, which is the whole aim. After the Euros last year I spoke to coach and we decided that I’d made the final twice at Europeans, why not medal at the next one?”

Combining his athletics with college studies, Stratford-upon-Avon-based Byng – who won both under-20 and under-23 titles at the England Championships on consecutive days last summer – is also a student of his sport and says watching the world’s best gives him confidence that he might be able to achieve similar in the future.

The 6’5” teenager currently mainly uses the ‘step back’ technique in competition but has been using the rotational style in training at Loughborough University.

“I do my own thing but I really do like looking at the top throwers in the world, like Ryan Crouser, Joe Kovacs and Tom Walsh, because their technique is so similar in the fundamentals but different in their styles,” he explains.

“They all threw exactly the same at world champs, pretty much, within a centimetre. It just shows that even though they have different body types and body size they all can throw far. There is reason to believe that I can get there one day.

“This whole winter I’ve trained rotation and I did try rotations during my opener but they didn’t go so well, so at the moment we’re still training rotation but I’m using my old technique, the step back, to get the distances out for 2020,” he adds.

» Lewis Byng’s GoFundMe page can be found at uk.gofundme.com/f/lewis-byng-singapore-2020-training

» This interview was part of a three-page feature highlighting the record-breaking performances by Keely Hodgkinson (click here to read), Tom Keen (click here to read) and Lewis Byng first published in the February 13 edition of AW magazine, which is available to order in print here or read digitally here