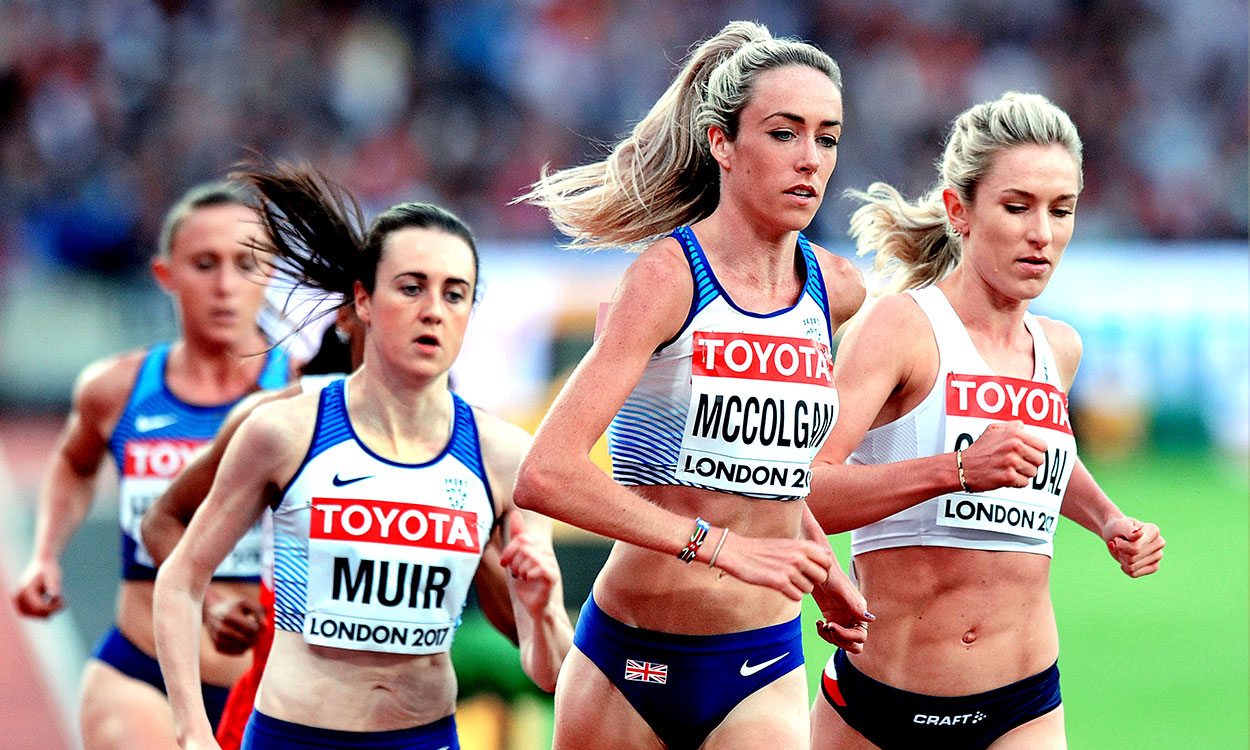 Eilish McColgan had a decision to make. Kenya’s Hellen Obiri was storming to victory, having dragged Laura Muir and a couple of other challengers along in her wake.

Behind that leading group, the 27-year-old found herself at the head of the chasing pack and with two options.

One: follow a familiar script, listen to the nagging voices in her head telling her she wasn’t entitled to be in such a prominent position and gently edge her way backwards or…

Two: seize the opportunity which lay in front of her, keep her foot to the floor and find out what she might be capable of.

She chose the latter and promptly scorched her way around the Monaco track, eventually coming fourth and finishing right on Muir’s tail. That in itself would have brought satisfaction enough but then McColgan looked at the clock. Going into that Diamond League meeting back in July, her personal best over 3000m had been 8:43.27. Now it stood at 8:31.39.

The gamble had paid off and brought a surge of confidence and momentum which carried her through the IAAF World Championships and into late summer races at which she produced a personal best over 1500m, lowered her 3000m mark to 8:31.00, broke Muir’s Scottish 5000m record by running 14:48.49 and ran her fastest ever 10km, clocking 31:56.

Throw in the bronze medal she won at the European Indoor Championships in the spring and 2017 represents a rather fine body of work.

It begins to look all the more impressive when you consider that it all came during a season in which she had to recover from calf and hamstring tears.

Following her injury-enforced decision to move away from the 3000m steeplechase, McColgan had not found it easy to convert to the 5000m but this has been the year in which things have truly clicked for her, both physically and mentally. 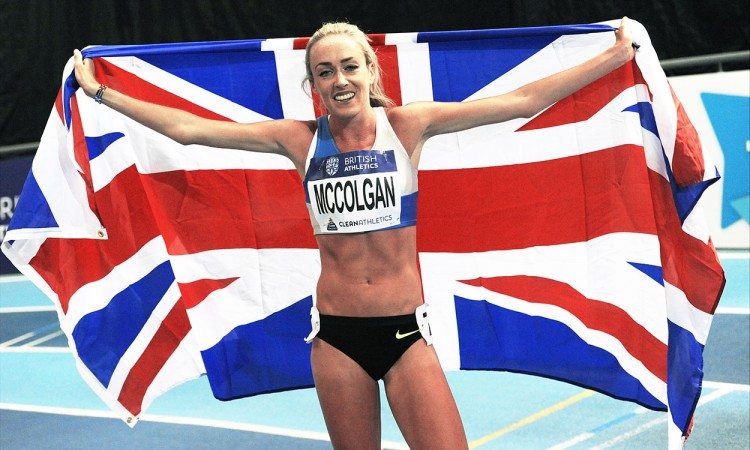 “It was difficult initially because I was so used to reserving that little bit of energy to make sure that I could get over the barriers,” she says of the switch she made last year. “My one biggest fear in the steeplechase was not being able to get over that last water jump because you’ve run out of energy. Every steeplechase athlete is like that – you pace yourself to make sure you can get through the entire race because it is such a gruelling event.

“So switching to the 5km was really difficult because I’d got this set pace into my head and then I’d get to the final stages feeling like I had all this energy in reserve and I kept finishing quite strongly. It would drive my mum and dad crazy but I couldn’t help it, it was a habit I’d got into through doing the steeplechase.

“But I remember Monaco was the real turning point for me. Emotionally it had been quite an up and down few months, with tearing my calf and then tearing my hamstring.

“I’d managed to get myself back running again finally, training had been going even better than before and I actually felt that having a bit of forced rest was a bit of a blessing in disguise. I had a bit of a second wind and came back training really well.

“So Monaco was the first race where I thought, ‘I’m really going to go for this’. I’d already qualified for the world championships and the race was over 3000m so it didn’t really mean anything and I thought, ‘this is your chance’.

“Monaco was the first race where I thought, ‘I’m really going to go for this’. I thought, ‘this is your chance’”

“I knew I was in good shape, I knew it was a really quick field, I knew Monaco was one of the most prestigious and fast tracks in the world. It was one of the first times I threw caution to the wind and thought, ‘right, I don’t care what happens in this race but I’m just going to go flat out and see how long I can hold on to it for’.

“I wasn’t at the very front of the race, but I found myself leading the majority of the pack and, usually, if I found myself at the front I would panic and think ‘oh god, I’m not meant to be here’ and fall back into the field, even if I was feeling good. I just didn’t have the confidence to feel like I should be up there, really.

“This time I hit the front and I had this split-second decision to make – ‘do I do my normal thing and go and sit in the back?’ but then I thought ‘no, you’re here now you cannot miss this opportunity’.

“I just thought there was no way I was going to miss this. You don’t know how long it will last for – how long I’ll be fit and healthy and in one piece – so it was a case of trying to make the most of the chance.

“I’m so glad I did it because it was a split-second decision where it could have gone the other way.

“I came out with a huge PB and I think that, once you have done it once, it gives you that little bit of confidence to think ‘right, now I’ve broken through that barrier and there’s no reason why I can’t do this more often’.”

McColgan’s mother and coach, Liz, had been proved right. The former world champion and Olympic silver medallist had continually insisted to her daughter that it would take just one race to bring a crucial breakthrough that would start to change everything.

That ‘huge PB’ also represented another distance over which daughter was now faster than her rather more decorated mother was in her prime.

The work the pair are doing together, with a little help from a few friends, is clearly working and McColgan is delighted with the support team she finds herself surrounded by. It has taken a bit of work for things to start falling into place, however.

“Obviously it’s brilliant to have my mum as my main coach, but she also has brilliant knowledge from her husband John Nuttall – who was also a very, very good runner in his own right,” says McColgan. “Then I’m also very fortunate to have Michael (partner and three-time Olympian Michael Rimmer), who has all of his experience as an athlete, while my dad was also a professional athlete so I feel like I’m really spoiled with the information I get from these people.

“I feel very, very fortunate with the set-up I have, now that I’ve created my little support team”

“It’s taken a little while to adapt because Mum moved out to Qatar and that was a huge change for me. It took quite a while for it to settle down and obviously my parents had quite a big, messy divorce so it’s taken a while for things to calm and fit into place again. But I feel like, now, we can finally communicate quite well amongst us all and we’re getting quite used to being able to communicate over that long distance. We seem to have worked it out now.”

She adds: “The athlete/coach relationship relies on feedback and I think myself and my mum are really good at that, with the input from John and Michael as well. They are the people on the ground I suppose – John is helping my mum out there and Michael is helping me out here.

“I feel very, very fortunate with the set-up I have, now that I’ve created my little support team.”

That process of regular feedback and communication has brought with it a change in training habits for McColgan. Having decided to focus on what works for her, rather than pay too much attention to the approaches taken by other athletes, the results have started to come.

“This year there has been a huge change in my training in the sense that I cut my mileage right down,” she says. “I only run 40-45 miles a week and everything else I do is just on a cross trainer or a spin bike.

“It’s quite an unusual way to train and I think in the past I’ve looked at what other people were doing and thought, ‘this isn’t the right way to train, these girls are doing this high mileage so I need to do that’ but this is the first year where we’ve really just concentrated on myself and gone ‘right, this is unusual but it seems to work for me so let’s just roll with it’.

“This is the first year where we’ve really just concentrated on myself and gone ‘right, this is unusual but it seems to work for me so let’s just roll with it’”

Now comes the task of trying to follow it up. Next year represents a unique and intriguing challenge given the early April scheduling of the Gold Coast Commonwealth Games, then the European Championships in August. Throw in the World Indoors in March and there is no shortage of targets to aim for.

McColgan will head for a winter training stint in Kenya with an open mind and, if she is running well, may well compete in Birmingham before heading out to Australia.

No matter how her schedule unfolds, however, her increasing confidence levels mean it’s not just new personal bests which will be in her mind when she takes to the start line in major competition in 2018.

“I’ve never been one to focus on medals, maybe because I’ve been so far away from them,” she insists. “Even as a kid I always used to focus on running a PB, that was my aim. I have never been someone who has dreamed of winning an Olympic medal – I just love running and wanting to see how fast I could go. It’s getting to the point now, though, where I’ve realised I am getting quite close to the medals.

“I feel like a medal is definitely within my reach for the Commonwealths and Europeans. I think for the Gold Coast the gold is wrapped up for Hellen Obiri but I think there will be quite a big scrap on for silver and bronze, which is exciting, and I feel like I should be a part of that.

“I think there’s a good chunk to still come off that 5km time because I think that’s the distance where I’m still developing.”