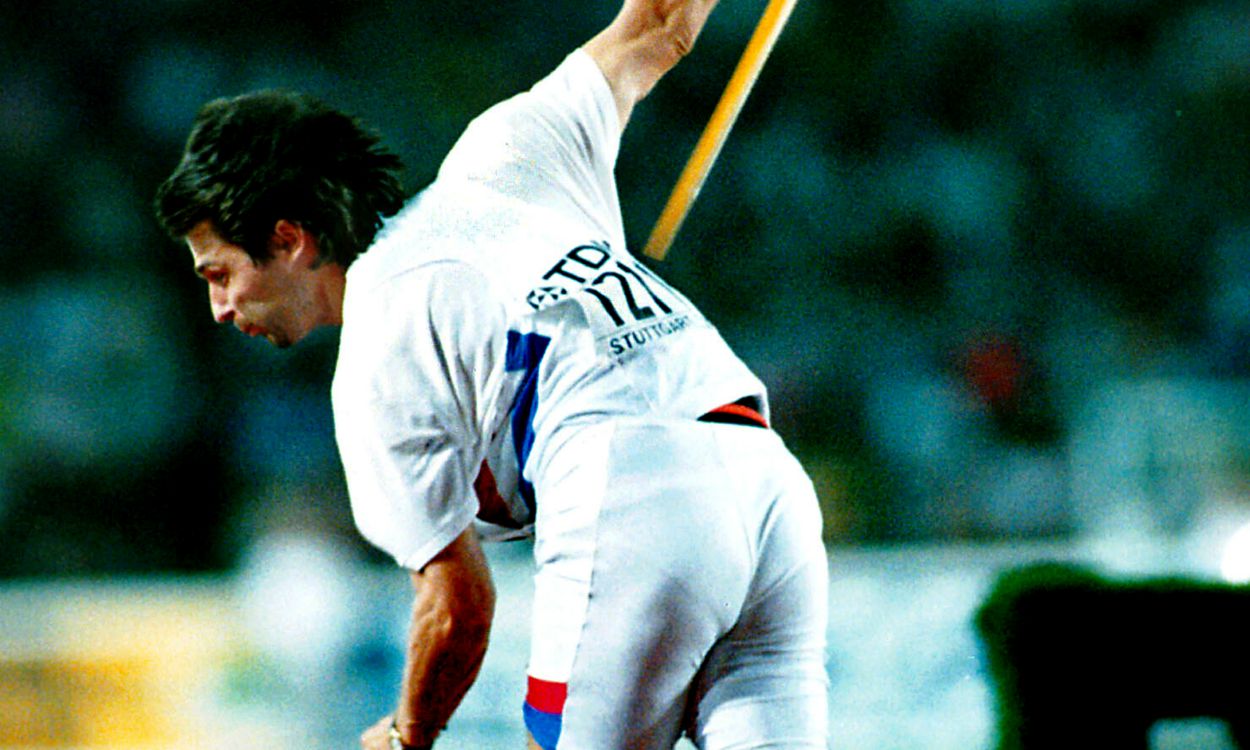 The big favourite for the first World Championships in Helsinki in 1983 was Tom Petranoff who had recently set a 99.49m world record. However, the American couldn’t throw within 16 metres of that mark in cold conditions.

East German Detlef Michel dominated the early rounds with successive throws of 88.96m, 89.48m and 88.74m before the rain came and he won by four metres from Petranoff and Olympic champion Dainis Kula. Much to the Finn’s disappointment, the best they could manage was 10th place.

They fared better in Rome in 1987. Seppo Raty was only 10th best in qualifying and fell over with his first throw and was only seventh after two rounds. He took the lead with a Finnish record 82.32m but then lost the lead in the fifth round to Soviet Viktor Yevsyukov’s 82.52m. Raty responded magnificently in the final round to snatch gold with 83.54m.

Britain had big hopes in Tokyo in 1991 with European and Commonwealth champion Steve Backley but he failed to make the final along with the other favourite Zelezny.

Finland did even better than in Rome. Kimmo Kinnunen, the son of 1968 Olympic medallist Jorma, shocked with an 88.48m qualifying and then sewed up gold with a 90.82m opener to become the third man to better 90 metres with the new specification. Raty finished strongest and went second with a 88.12m final round Hill was a fine fifth with 84.12m.

At the third try, Zelezny won a world title to add to his Olympic gold. Only fourth at halfway, an 85.98m fifth round won him the title by a metre from Kinnunen. Initially Dmitriy Polyunin was third but his disqualification saw Hill take bronze with 82.96m, a metre ahead of Backley in fourth.

Backley finally showed his European gold medal winning form in Gothenburg in 1995 and an 86.30m last round throw gained him silver but some way down on a peerless Zelezny who threw 88.92m in the fourth round and 89.58m in the last after a 90.12m in qualifying.

The consistent Hill finished sixth and then he just missed a medal in Athens in 1997, only losing a bronze to Backley’s last round 86.80m which narrowly snatched the silver. With Zelezny only ninth, the surprise winner was Marius Corbett. The South African ranked just 19th of the 40 entrants prior to Athens but smashed his PB with a 88.40m throw to easily win gold as Greece’s Kostas Gatsioudis took bronze 10cm ahead of Hill, and 16cm behind Backley.

The Greek was in better form for Seville in 1999 and he opened with 89.18m and that looked that might be enough for gold until former World Junior champion Aki Parviainen went ahead with a 89.52m fifth round throw to become the 11th Finn to win a World or Olympic javelin title. Backley, hampered by a knee injury, could only finish eighth to stop his sequence of medaling in Olympics, World and European competition.

Hill just missed making his sixth World final but he then did it in Edmonton in 2001, though was only 12th with a poor 77.81m after a 84.88m qualifier as Backley narrowly missed out on joining him with 81.50m in qualifying. Gold went to Backley’s great rival, Zelezny, who at 35 years old was still in great form with a 90.76m championship record in qualifying.

Parviainen was only 31cm ahead of Backley with 10th in qualifying with 81.82m but in the final he threw 91.31m to take Zelezny’s record. It didn’t last long though the Czech responded with a huge 92.80m second round throw. Gatsioudis won his third successive medal with 89.95m.

Zelezny competed in a record eighth championships in Paris in 2003 but just missed out on a medal in fourth while Backley was ninth with gold going to Sergey Makarov, who had been fifth, seventh and ninth in the previous three Championships. He was the son of the 1980 Olympic silver medallist Aleksandr, and he won a modest competition with an 85.44m opening throw.

Andrus Varnik was a close second and the Estonian went on to win in poor conditions in Helsinki in 2005 with a fourth round 87.17m which pushed Olympic champion Andreas Thorkildsen into second with Makarov third as the Finns again disappointed on home ground with Helsinki-born Tero Pitkamaki the best in fourth.

Despite a modest 76.71m, Briton Nick Nieland missed the final by a place.

Pitkamaki did better in Osaka in 2007 with 89.16m in the second round and then 90.33m in the final round with Thorkildsen again second. In his fourth final, the Norwegian advanced to gold in Berlin in 2009 with an easy victory with 88.95m and became the first javelin thrower to hold the Olympic, world and European title. Cuban Guillermo Martinez was a distant second.

The Norwegian and Cuban won medals again in Daegu in 2011 but were well beaten in a modest competition by surprise German Matthias de Zordo with an opening throw of 86.27m.

Moscow in 2013 was a better competition and Czech Vitezslav Vesely won with 87.17m, just 10 centimetres ahead of Pitkamaki. Julius Yego set a Kenyan record of 85.40m in fourth with Thorkildsen sixth.