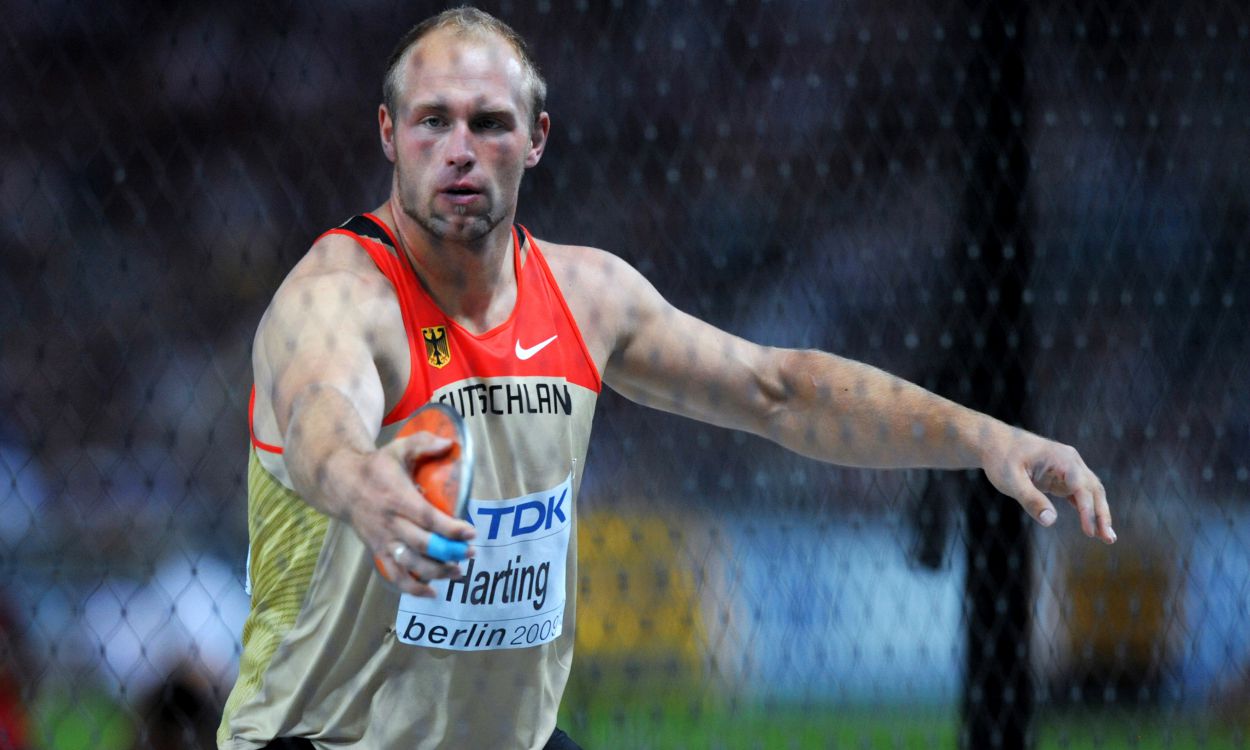 As Beijing beckons, we continue our event-by-event World Championships history series by looking at the men’s discus

The discus at the first World Championships in 1983 was a close contest. European champion Imrich Bugar took an early lead with 67.48m and then improved to 67.72m in the second round. Cuban Luis Delis was his nearest challenger at this stage with 66.30m.

The Czech Olympic silver medallist carried on his good form with 67.14m in the fourth and 66.94m in the fifth. Delis, who had been the bronze medallist in Moscow three years earlier, suddenly become more of a threat in the last two rounds but his final efforts of 67.36m and 66.48m meant he was a clear silver medallist. Gejza Valent ensured another Czech medal in third.

Mac Wilkins, the 1976 Olympic champion, could only finish 10th but at least made the final – unlike world record-holder Yuriy Dumchev, who couldn’t better 60m in qualifying compared to his 71.83m record earlier in that year.

East German Jurgen Schult, fifth in Helsinki, smashed Dumchev’s world record with 74.08m in 1986, which 29 years later still stands, and he showed he could compete for titles after some championship disappointments with a first major title in Rome in 1987.

Twelve years after setting a world record of his own, 40-year-old American John Powell led the first round with 66.22m. Schult responded with 68.74m in round two, the longest in a major championship. That won him the gold easily and he followed up with four more good throws to average well over 66m for all six.

Powell became the oldest world championships medallist in second while Delis won his second medal thanks to a final round throw. Briton Simon Williams wasn’t far from qualifying with 60.68m, which would have placed 10th in the final.

Another German won in Tokyo in 1991, but this time it was little-known Lars Reidel, who was competing in his first major championships. In unhelpful conditions, the 24-year-old opened with 66.20m and that proved enough for gold, though Netherland’s Erik de Bruin came close with a 65.82m final throw. Schult, competing for a unified Germany, finished sixth.

In Stuttgart in 1993, the large German crowd were delighted when Schult comfortably led the first round with 64.32m and then Reidel took over with a 67.72m second throw, which proved sufficient for gold. Dmitriy Shevchenko snatched silver with a final throw of 66.90m as Schult took third. Olympic champion Romas Ubartas was initially fourth but was removed due to failing doping.

In Gothenburg in 1995, Riedel struggled in qualifying but in the final he was in a different class and led after a 65.32m opener and a 68.76m second throw, which wrapped up the gold medal as he had the best four throws overall. Belarus took the other medals with Vladimir Dubrovshchik taking silver with a 65.98m throw and Vasiliy Kaptyukh close by in third. Britain’s Robert Weir qualified for the final as fifth best and then was an excellent ninth in the final with 63.14m, just losing out by four centimetres on having three more throws.

In Athens in 1997, there was a similarity to Stuttgart as a 37-year-old Schult led after round one with 66.14m. Reidel then dominated the next two rounds with 68.24m and 68.54m to win his fourth successive title in style. Lithuanian Virgilijus Alekna also moved past Schult in round two and took silver as the German won his third medal.

Weir went one better than in Sweden and took eighth place with 63.06m to underline his consistency. Reidel wasn’t fully fit for Seville in 1999 but put up a good defence, throwing 68.09m for third. Schult took the lead with a 68.18m in the second round but lost it in the final round.

American Anthony Washington wasn’t highly regarded, having been a non-qualifier in 1991, 10th in 1993 and not competing at all in 1995 or 1997 and was lying fourth until he threw 69.08m in the final round. It was the second longest-ever global championship throw, only bettered by Reidel’s 69.40m at the 1996 Olympics. Alekna threw 67.53m, a distance that would have won at least silver in all previous championships but was not good enough for bronze here. Weir missed the final by just 8cm.

Reidel was back again in Edmonton in 2001 and was pre-ranked only eighth after he had missed a month’s training with a knee injury. In a superb competition, he was lying just outside the medals with 67.10m before his fourth throw but he produced brilliant 69.50m and 69.72m efforts to set a new global championship standard though it was close as Alekna threw 69.40m. Dmitriy Shevchenko threw 67.57m and missed out on a medal by four centimetres. Weir again just missed the final.

In Paris in 2003, Reidel just missed out on a seventh medal, finishing fourth. Olympic champion Alekna opened with a huge 69.69m throw and that proved enough for gold. European champion Robert Fazekas, who had beaten Alekna four times prior to Paris, came close with 69.01m in the second round and finished with 68.87m.

Alekna was on top form in Helsinki in 2005, throwing 68.79m in qualifying and then led with 67.90m in round two and 68.10m in round three. Estonian Gerd Kanter then caused a surprise with 68.57m in round four to deny the Lithuanian the lead.

It all went down to the final throw and Alekna responded with the first 70m-plus throw in a global championships by just 17cm. Reidel finished in ninth place.

Alekna had not been beaten for two years when he threw in Osaka and before that had a 43-2 win-loss record against Kanter. However, Kanter assumed control with 68.94m in the third round and backed that up with a 68.84m final throw. German Robert Harting took a surprise silver with 66.68m with Alekna ending up fourth.

Kanter was favourite at Berlin in 2009 with the 71.64m world lead. The first round, though, was led by Olympic silver medallist Piotr Malachowski, who opened with 68.77m. He then increased his lead with a 69.15m Polish record in round five. Harting, who was lying second with a 68.25m opener and then had three throws of 67 metres, then had the throw of his life, launching his final effort of 69.43m to deny the Pole the gold. Kanter narrowly got the better of rival Alekna to take bronze.

Harting wasn’t at his best due to a knee injury at Daegu in 2011, but a 68.49m opener ultimately secured the gold, improving to 68.97m in the fourth. Kanter won his fourth medal in second. Alekna finished sixth to equal Reidel’s discus record of eight world championships finals. Brett Morse did well to make the final where the Briton finished 12th.

In Moscow in 2013, Harting was now Olympic champion and again dominated with a 68.13m second round throw, 69.11m in the fourth round and 69.08m in the last one. Malachowski was a clear second best and won his second silver with 68.36m in round five. Kanter won his fifth medal in third.