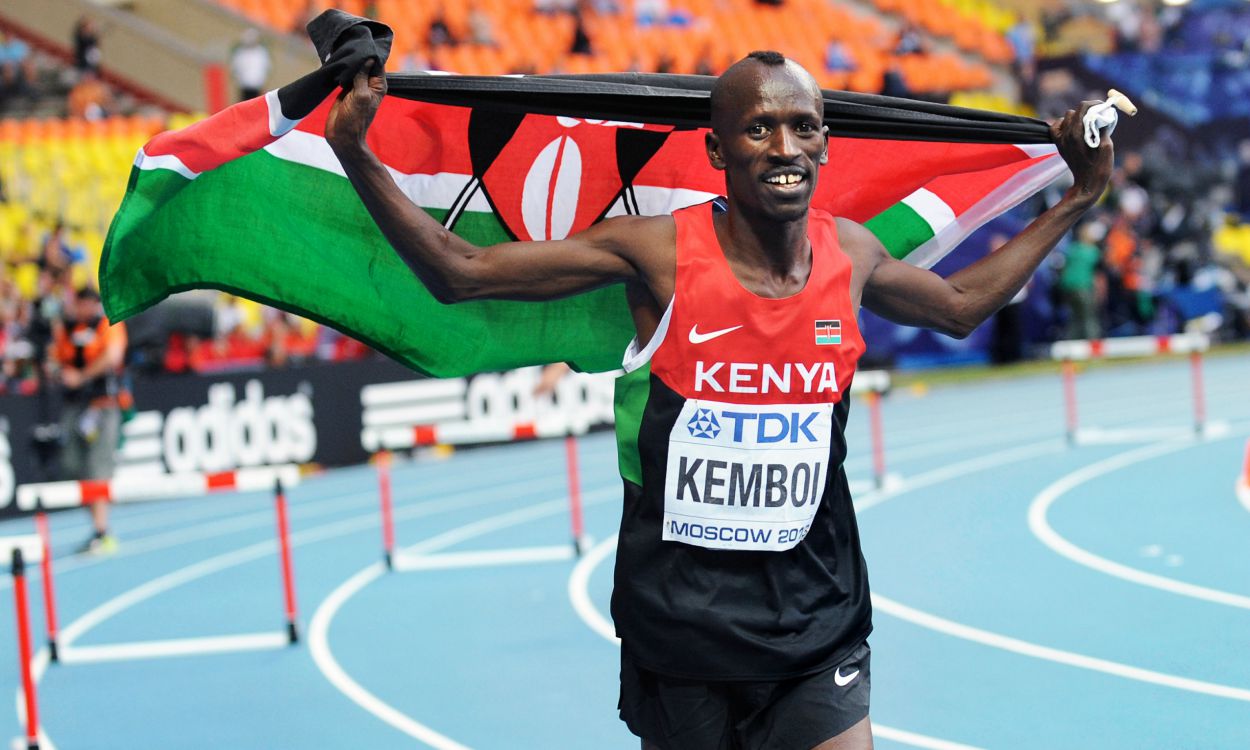 The steeplechase final at the inaugural world championships in Helsinki in 1983 was a top-class race. Tommy Ekblom excited the Finnish home crowd as he sprinted into the lead at the start and was still ahead until the last 600m. German Patriz Ilg, who regularly sprinted to sub-60 last laps, was in command over the final barrier, although Henry Marsh was close behind and hoping to pounce. Unfortunately Marsh fell heavily and eventually trotted home eighth.

Ilg won by two seconds in 8:15.06 as runner-up Boguslaw Maminski had to sidestep the fallen Marsh. Also benefiting from the American’s fall was Colin Reitz, who finished strongly to take a bronze. Britain remarkably had three in six with Roger Hackney and Graeme Fell also excelling as Europe dominated the top six, with the leading Kenyan, Julius Korir, only seventh. No Brit has finished in the top eight since. With just 35 competitors in the event, for some reason runners were made to run three rounds.

Kenya could only manage a best of seventh in 1987 in Rome too as again Europe swept the medals. This time Italian Francesco Panetta, who five days earlier had been second in the 10,000m, set a fierce pace.

Despite celebrating well before the line, he set the fourth fastest ever time of 8:08.57, though East German Hagen Meltzer closed the gap to less than two seconds at the finish. Fell, now in Canadian colours, was fifth.

Kenya fared better in Tokyo in 1991. Panetta led early on but faded to eighth and it was fast-finishing Moses Kiptanui, who was the world junior 1500m champion, who took gold from team-mate Patrick Sang. Algerian Azzedine Brahmi surprisingly outkicked Olympic champion Julius Kariuki for the bronze. Scot Tom Hanlon impressed in the heats with an 8:18.02 victory but was only 11th in the final and he also disappointed in Stuttgart in 1993 again with a final 20 seconds slower than his heat.

Kiptanui, who had missed the 1992 Olympics but just after that improved the world record to 8:02.08, again proved the fastest as Sang repeated his silver. This time Italian Alessandro Lambruschini prevented the Kenyan clean sweep as for the first time in one race five runners broke 8:10.

Kiptanui was such an accomplished all-round runner that he set a world 5000m record in 1995 and made it three golds in a row in Gothenburg in 1995, accelerating throughout the race to win in the third fastest time ever of 8:04.16. He won by five seconds and admitted afterwards he had been saving himself for Zurich where he made history with the first sub-eight in the event.

Kenya went one-two again, though they should have done better as Matthew Birir was knocked down by inexperienced runner-up Christopher Kosgei on the last lap.

Kenya finally took their first clean sweep in Athens in 1997, though Kiptanui narrowly lost out on his fourth title as Wilson Boit Kipketer ran an astonishing 57.5 last lap and two tenths covered the medallists.

The standards were high in Seville in 1999 as nine men were under the previous fastest ever championships heat of 8:15.63 in the 1988 Olympics. Disappointingly, the final wasn’t as quick as some of the heats but it was a close race as Kosgei sprinted to victory over Boit Kipketer. Kenya had four in seven (with the defending champion added to the usual three per nation) but Moroccan Ali Ezzine took bronze.

Ezzine advanced to second in Edmonton 2001 in a slow tactical race, though Olympic champion Reuben Kosgei – no relation to the previous champion – won comfortably by a second.

The race in 2003 was a far more memorable event. Stephen Cherono, a 7:58.10 performer and the Commonwealth champion, had controversially changed his allegiance to Qatar and his name to Saif Saaeed Shaheen. Shaheen blasted the first lap inside 60 seconds and was well inside world-record pace after his opening 2:36.24 kilometre. He slowed on the second kilometre, though, and Ezekiel Kemboi got back in touch. The pace slowed dramatically initially in the third kilometre – so much that a pack including two Spaniards caught the leaders, exciting the home crowd. The last lap reverted to an all-out sprint between Kemboi and Shaheen. After many lead changes, Kemboi led over the last barrier but Shaheen’s final sprint gave him victory.

The 2005 race in Helsinki was held in pouring rain and saw the same one-two as in Spain. It was a less dramatic race but Shaheen’s 57.8 last lap and 1:58 final 800m over the barriers gave him his 22nd consecutive steeplechase victory.

Kemboi, who won the Olympics in 2004, won his third silver in Osaka in 2007 as he was well beaten by team-mate Brimin Kipruto, who was second in the 2004 Olympics but improved to take gold in the 2008 Olympics. Kenya again clean-swept but, despite three runners at 8:01.18 or faster, missed out on the sweep in a super-fast race in Berlin in 2009. After three silvers, Kemboi’s fast last lap gave him gold in a championships best 8:00.43. Richard Mateelong was half a second back but Paul Koech, who was second into the straight, was caught by Bouabdellah Tahri, who broke the European record with 8:01.18 in his eighth global final.

Kipruto, who had frustratingly missed the world record by a hundredth of a second earlier in 2011, was a big favourite in Daegu. Kemboi won a slow-run race by more than a second with another impressive kick despite finishing in lane seven and pumping his fists in celebration. Former champion Kipruto was second. Kemboi, who won a record fifth medal in Korea, made it six in Moscow in 2013, having also regained the Olympic title in London. He won gold with Kipruto in second but this time it was under-20 Conseslus, who finished just three metres behind. The winner’s last kilometre was 2:34 and his final 400m, which included an outside water jump, was inside 60 seconds. A Frenchman took bronze for the third successive championships as Mahiedine Mekhissi-Benabbad claimed his second medal of this colour after a bold challenge of his own on the last lap.

After that promising start in 1983, Britain did at least have a competitor here – unlike in five of the previous seven championships in which only Andrew Lemoncello gained selection. James Wilkinson’s 8:35.07 made him the fastest Briton in the World Championships since Robert Hough, 16 years earlier.