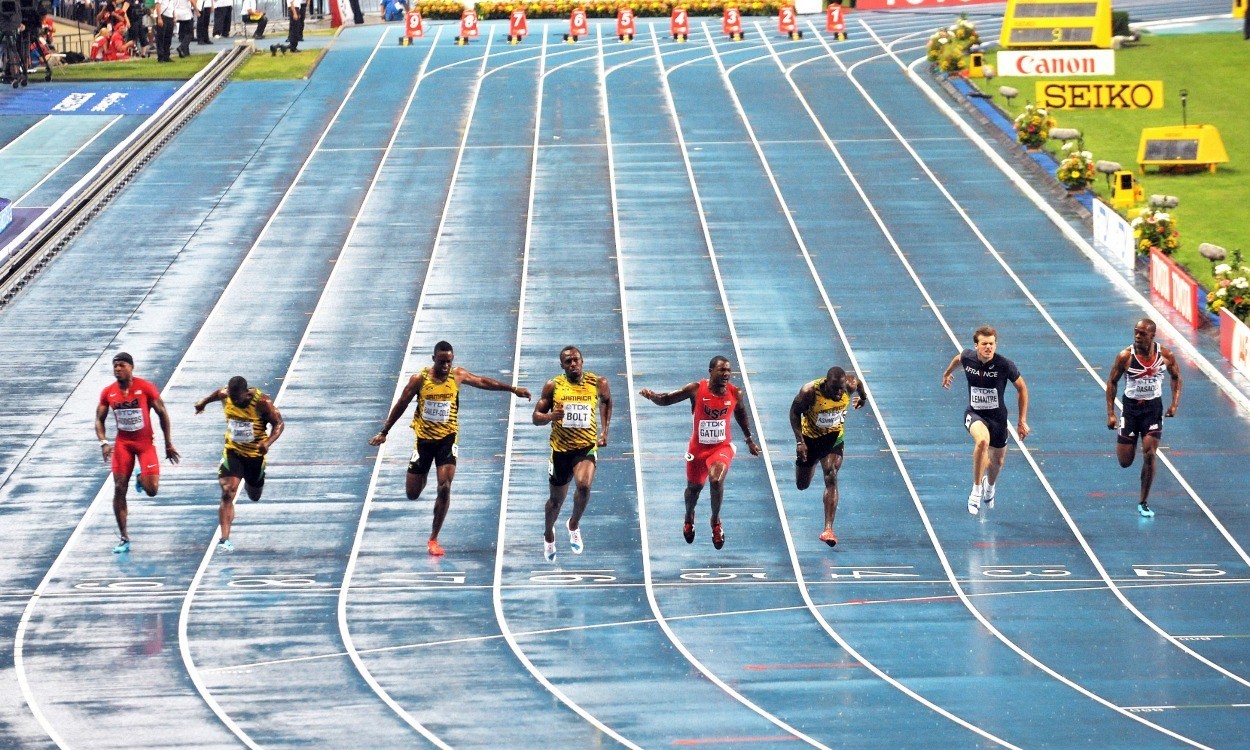 The 1980 Olympic boycott saw a number of nations denied Olympic chances and the Americans were keen to make their presence felt in the inaugural championships in Helsinki in 1983. The big favourite in the 100m and destined to be the star of the championships was Carl Lewis, who had recently posted the fastest-ever sea-level marks of 9.97 and 19.75, but he chose to focus on the long jump and 4x100m relay rather than the long sprint here.

In the 100m final, American Emmit King had the best start along with Olympic champion Allan Wells and was leading at 70 metres before Lewis powered past for a win by more than a metre. Calvin Smith, who held the world record with his 9.93 at altitude, moved through to second with King completing an US clean sweep. Wells finished fourth.

In the 200m, Smith went one place better with an easy 20.14 win from team-mate Elliott Quow. Just as he did in the Olympic 200m, world record-holder Pietro Mennea narrowly edged Wells on the line, but this time it was for bronze and not gold.

In the final, Johnson’s reaction time was a very special 0.109 and he built up a clear metre lead almost immediately and had gone further ahead at halfway to lead in 5.53 to Lewis’s 5.64. Lewis closed slightly over the second half but couldn’t get within a metre despite running 9.93.

Johnson smashed the world record with 9.83. However, a year later in the Seoul Olympics, Johnson failed a drugs test and lost Olympic gold and admitted drug use in Rome so was retrospectively stripped of his gold and world record. Ray Stewart and Linford Christie moved up a place to take the other medals.

Lewis again missed the 200m and, in an epic final, Smith retained his title as just 0.09 covered the top six. In lane eight after a slow semi, he was only sixth at 100m in 10.63, but he finished strongly and edged France’s Gilles Queneherve as both ran 20.16, with 20-year-old John Regis also just losing out with a 20.18.

Lewis went into the Tokyo 100m in 1991 as defending champion after Johnson’s disgrace and the race proved to be the greatest sprint race in history up to that point as 9.96 was only good enough for sixth on a super-fast surface.

Lewis showed his form with a windy 9.80 quarter-final and a legal 9.93 semi-final. However, the new world record-holder (at 9.90), Leroy Burrell, won the other semi in 9.94. In the final, Jamaican Stewart led at 50m in 5.54, with Lewis just sixth in 5.61. Lewis ran an incredible second half and won with a world record 9.86 from Burrell’s 9.88. Dennis Mitchell made it a US clean sweep but was fortunate as his reaction time was an illegal 0.090 as Christie finished fourth in 9.92.

In the 200m, new star Michael Johnson was denied a world record as he ran 20.01 into a strong 3.4m/sec headwind and he won by three metres from Frankie Fredericks, feeling it was a 19.5-19.6 effort in better conditions.

By Stuttgart 1993, the championships were every two years. Christie, who almost retired after missing a medal in 1991, changed his mind to become Olympic champion in 1992 and then he won the 100m world title with 9.87. Technically it was a better sprint than Lewis’s 9.86 as the wind was just 0.3m/sec compared to the American’s 1.2m/sec. Andre Cason took second in 9.92 as Mitchell repeated his bronze with Lewis just fourth.

There were also superb times in the 200m. Fredericks, who was second in Tokyo and Barcelona, finally won gold as he ran an impressive 19.85 to run down Regis, who had led at 150m in an electronic world best of 14.93 and took silver in a British record 19.94. Lewis won a record 10th world championships bronze, becoming the first man to break 20 seconds and not finish in the first two.

In Gothenburg in 1995, Christie injured himself in his semi and faded to sixth in the final, which saw Commonwealth sprinters take seven of the eight places with a Canadian one-two with Donovan Bailey won in 9.97 from Bruny Surin. Johnson returned to the 200m and won easily in 19.79, though he was at his limits as he had run four 400m races in five days before another four at 200m in two days as he became the first man to win an Olympic or world 200m-400m double.

In Athens in 1997, Trinidad’s Ato Boldon, who was third in the 1995 100m, eased down in his quarter-final to 9.87 to narrowly miss Bailey’s 9.84 world record. Suffering from cramp, Boldon was only fifth in the final as Maurice Greene, who didn’t even make the semis in Sweden, won in 9.86 to go to third on the all-time lists with fast-finishing Bailey second on 9.91. Boldon bounced back in the 200m to win by two metres from Fredericks, who won his fourth medal at the half-lap.

Greene retained his title in Seville in 1999 and, despite a slow start, ran 9.80 to just miss his world record of 9.79. Bruny Surin, who was in his fifth final, clocked the fastest-ever runner-up time of 9.84. Dwain Chambers took bronze with 9.97.

Greene became the first to gain a World Championships sprint double as he won the 200m in 19.90 in his eighth race of the meeting. Silver went to Francis Obikwelu, who ran 19.84 to win the semi in which Marlon Devonish ran 20.25 and didn’t even make the final.

In Edmonton in 2001, Greene claimed his third 100m title as he ran 9.82 into a headwind despite a knee injury and having to hobble the last 15 metres. Tim Montgomery closed to second in 9.85 but lost his silver later due to a doping investigation in 2004. In the 200m, Olympic champion Kostas Kenteris was a clear winner in 20.04. It was very close for second with 0.05 between the next six athletes. Christian Malcolm, who was a 100m finalist, won his semi-final in a mightily impressive 20.08 after a 20.13 quarter-final but could only manage 20.22 for fifth in the final.

In a slow Paris 2003 final, 2002 Commonwealth champion Kim Collins was a surprise winner in just 10.07 as 0.04 covered the top five. Darren Campbell was also a surprise medallist in third in 10.08. Chambers, who was three thousandths behind his teammate, joined world record-holder Montgomery in later being removed from the results due to doping. Cool, wet conditions also meant the 200m times were poor and John Capel edged a modest-quality but exciting final in 20.30. Campbell just missed a medal by 0.01 in fourth as Shingo Suetsugu surprisingly edged him to win Japan’s first global sprint medal in more than 50 years.Fredericks was seventh in his sixth final.

World record-holder Asafa Powell injured himself just before the 2005 Helsinki championships. Olympic champion Justin Gatlin, who would have probably won anyway, was left clear to take gold by two metres in 9.88. Gatlin, who then won the 200m in cool conditions in 20.04, failed a drugs test the following year. Capel returned in third to deny a medal to Tyson Gay, who ran a windy 19.99 heat. This was the first time one nation had taken the first four spots in a world final. Last was Usain Bolt, who couldn’t cope with lane one and suffered a muscle pull in the straight and jogged in last in 26.27.

There was a first in Osaka 2007 in the 100m as eight different nationalities competed. The race was won impressively by Gay in 9.85 as he ran down Powell at 70m as the Jamaican faded to third. Marlon Devonish was the leading Briton in sixth. Gay made it a sprint double in the 200m as he ran down Bolt after 100m and won in a championship record 19.76. Bolt was a clear second in 19.91.

Bolt was a different athlete in 2009 after his world record and Olympic sprint double. Unlike in the Beijing 100m where he ran 9.69, he kept the pressure on after an unprecedented 6.31 60m to stop the clock at a sensational 9.58. Gay ran an exceptional 9.71 in second with Powell third on 9.84. With Gay saving himself for the relay, Bolt was a class apart in the 200m and shot through 100m in a remarkable 9.92. He didn’t think he was as fit as in Beijing but held on to win in another world record of 19.19 to improve the 19.30 from the Olympics. A record five broke 20 seconds with Alonso Edward second on 19.81 and Wallace Spearmon winning his third successive medal.

When Bolt false-started in Daegu in 2011, training partner Yohan Blake won easily in 9.92 from Walter Dix with 2003 champion Collins third, but the Jamaican made no mistake in the 200m and, after a 9.97 100m on the bend, won in 19.40, the third best time in history. Dix gained his second silver with 19.70 as Christophe Lemaitre’s French record of 19.80 secured bronze.