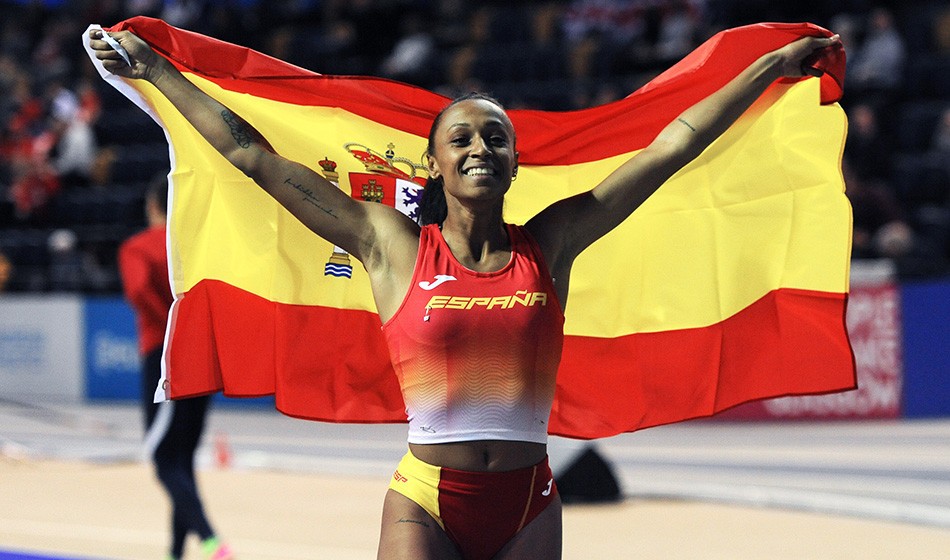 Ana Peleteiro’s family dubbed her the ‘kangaroo girl’ when she won the world junior title in 2012. It was due to the spring in her stride on the triple jump runway, but the nickname might also apply to the way she has bounced her way up the echelons of elite athletics.

When she won the world junior title – on home soil in Barcelona – she was aged only 16 and improved her best by 64cm in the competition. In 2017 she finished seventh in the IAAF World Championships and last year took world indoor and European outdoor bronze medals.

Then, on Sunday morning in Glasgow, she bounded out to a Spanish record of 14.73m to take European indoor gold ahead of Greece’s Paraskevi Papachristou (14.50m) and Ukraine’s Olga Saladukha (14.47m).

“It’s so special. I am so happy,” she said. “It’s my first European gold medal and it comes after I suffered from a little tendon injury.

“I haven’t jumped for a month. I trained a lot to do well. After two foul jumps, my coach said, ‘just do it’ – and then I knew I could do it.

“It was difficult especially in my head. I told myself to just enjoy it. Jumping the national record is a result of my full dedication and passion. It means everything to me.”

Peleteiro is from Ribeira but currently trains in Guadalajara in Spain with world champion Yulimar Rojas as part of a group coached by 2000 Olympic and five-time world outdoor champion Ivan Pedroso.

Pedroso also won six world indoor titles, so the Cuban certainly knows how to prepare his athletes for these events. In Glasgow, Peleterio took the lead in round three with 14.56m before extending it to 14.73m in the fourth round.

There was no host nation interest in the final, though, as British No.1 Naomi Ogbeta missed out in qualifying by a frustrating 2cm.

Miltiadis Tentoglou impressed in the men’s long jump final by leaping a world-leading and Greek indoor record of 8.38m – the best indoor mark by a European for a decade.

Thobias Montler of Sweden jumped a PB of 8.17m for silver and Strahinja Jovancevic of Serbia a national record of 8.03m for bronze.

The women’s shot put final was close at the top and Bulgaria’s 2015 bronze and 2017 silver medallist Radoslava Mavrodieva finally gained gold after launching herself into the lead with a PB throw of 19.12m in round five.

Former world champion Christina Schwanitz of Germany had led with a throw just 1cm off of that eventual winning mark but couldn’t respond so secured silver, while Anita Marton of Hungary was third with 19.00m.

Following earlier qualifying action, Andrew Pozzi will have the opportunity to go for a third consecutive major title after finishing second in his 60m hurdles semi-final behind Spain’s Orlando Ortega.

The British world and European indoor champion wasn’t sure that he’d have an indoor season at all following injury but he has improved in each round and this time clocked a season’s best of 7.61 behind Ortega’s 7.57 to make the final.

In the women’s event, Luca Kozák clocked a Hungarian record of 7.97 to win the first semi-final ahead of Nadine Visser of Netherlands with 7.99.

Germany’s defending champion Cindy Roleder won the second semi-final in 8.02 from Elvira Herman of Belarus with 8.03.