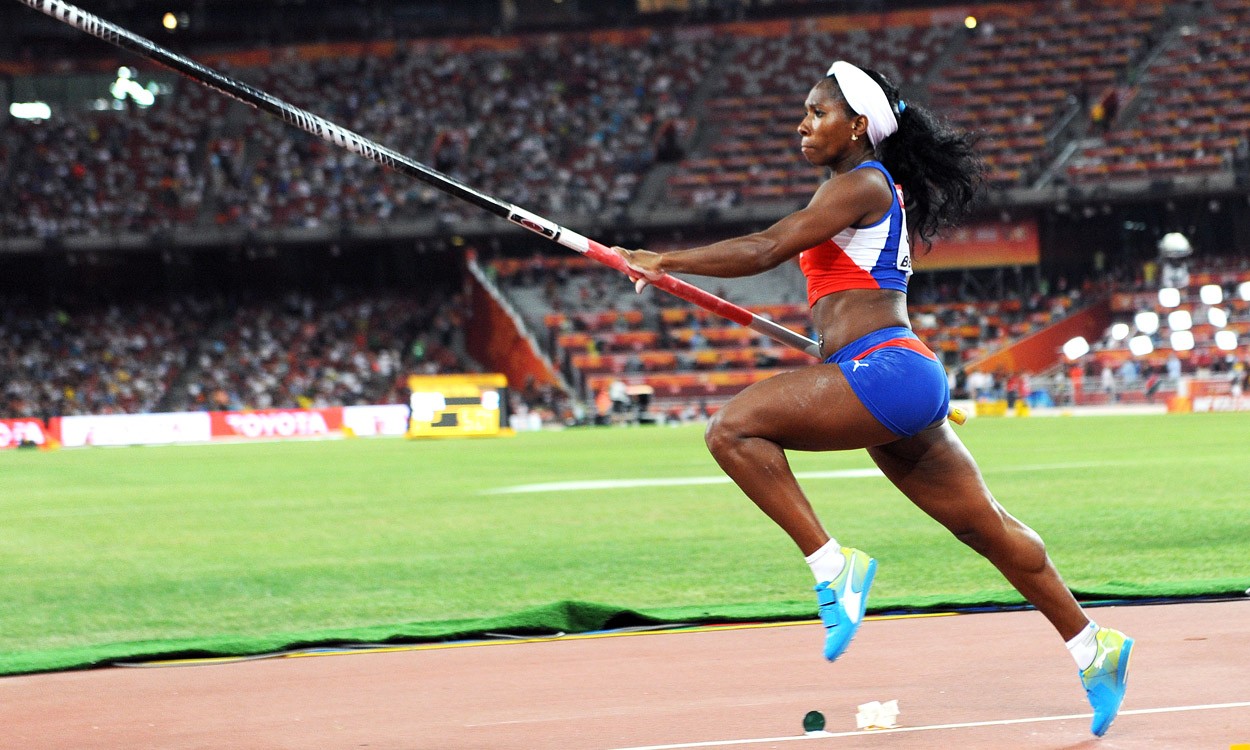 The Cuban beats Brazil’s Fabiana Murer with a heart-stopping final attempt at 4.90m

The Cuban improved on her bronze medal from two years ago in Moscow, going clear at 4.90m with her third and final attempt to pip Brazil’s Fabiana Murer into silver.

Nikoleta Kyriakopoulou briefly looked the one likely to take top spot as she was the only vaulter to clear 4.80m at her first attempt, but the Greek had to settle for bronze after failing at the following height.

Silva found herself sitting behind Murer on count-back heading into her final effort, but cleared 4.90m to take the title as the Brazilian was unable to respond.

Holly Bradshaw returned to a major championship final for the first time since London 2012, but had to settle for seventh place.

Bradshaw headed into Beijing feeling as fresh as ever and the British record-holder looked somewhere near her best in setting a season’s best of 4.70m.

Zuzana Hejnova became the first woman to defend the 400m hurdles World Championships gold as she blew away her competition in Beijing.

There was little shock in the 400m hurdles as the Czech controlled the race from the gun to tape winning in a world leading time of 53.50.

The USA claimed second and third with Shamier Little and Cassandra Tate running 53.94 and 54.02 respectively ahead of Denmark’s medal hopeful Sarah Slott Petersen in fourth with 54.20.

Eilidh Child, the European champion from 2014, ran 54.78 to come sixth , one place below where she finished in Moscow two year ago, and the Brit admitted she felt there would have been a medal in it for her had she managed to run a better race.

“I just didn’t execute the right race,” she said. “I stuttered on a couple of the hurdles and I felt if it was smoother, I would have run a much better race.

“I feel like I should be amongst the medals or at least closer and I just feel like I’m throwing these opportunities away.”

You could have thrown a blanket over the three medallists coming off the final barrier, but the 23-year-old Kenyan kicked past Ghribi and Krause to win in a time of 9:19.11 to take Kenya’s gold medal tally in Beijing to six.

Dina Asher-Smith gave another enticing glimpse into the future of British sprinting as she stormed to victory in her 200m heat, setting a new personal best of 22.22.

The Brit raised a few eyebrows by her decision to stick solely to the 200m in Beijing after becoming the first British woman to dip under 11 seconds in the 100m at the Anniversary Games, but there was never any doubt in Asher-Smith’s mind what her focus would be this season.

And few could question her decision after her performance in the heat as the 19-year-old powered round the bend in first place before being able to cruise to the line, clocking the fastest time of all qualifiers.

After her victory, Asher-Smith said: “I’m really, really happy. I didn’t expect to go out there and run a PB. I was just trying to qualify, so I made sure I ran a good bend, then try and relax and ease my way to the line and get a good lane in the semi-final.”

Fellow Brits Bianca Williams and Margaret Adeoye also came through their heats with 22.85 and 23.10 respectively.

But there was controversy from Adeoye’s heat after the 2011 champion Veronica Campbell-Brown ran into the Brit’s lane on her outside when entering the straight, but the Jamaican suffered no penalty after winning in 22.79.

Dafne Schippers, the silver medallist from the 100m, looked ominous in winning her heat with a time of 22.58.

After a lacklustre championships so far for the USA, Jeneba Tarmoh and Candyce McGrone gave the American team something to be hopeful about, looking comfortable in winning both their heats with times of 22.79 and 22.48 respectively.

» See the September 3 edition of AW magazine for coverage of the final five days of World Championships action, while the August 27 edition includes reports, results, news, stats and more from the first four days