World leads for Rudisha and Ayalew in Glasgow 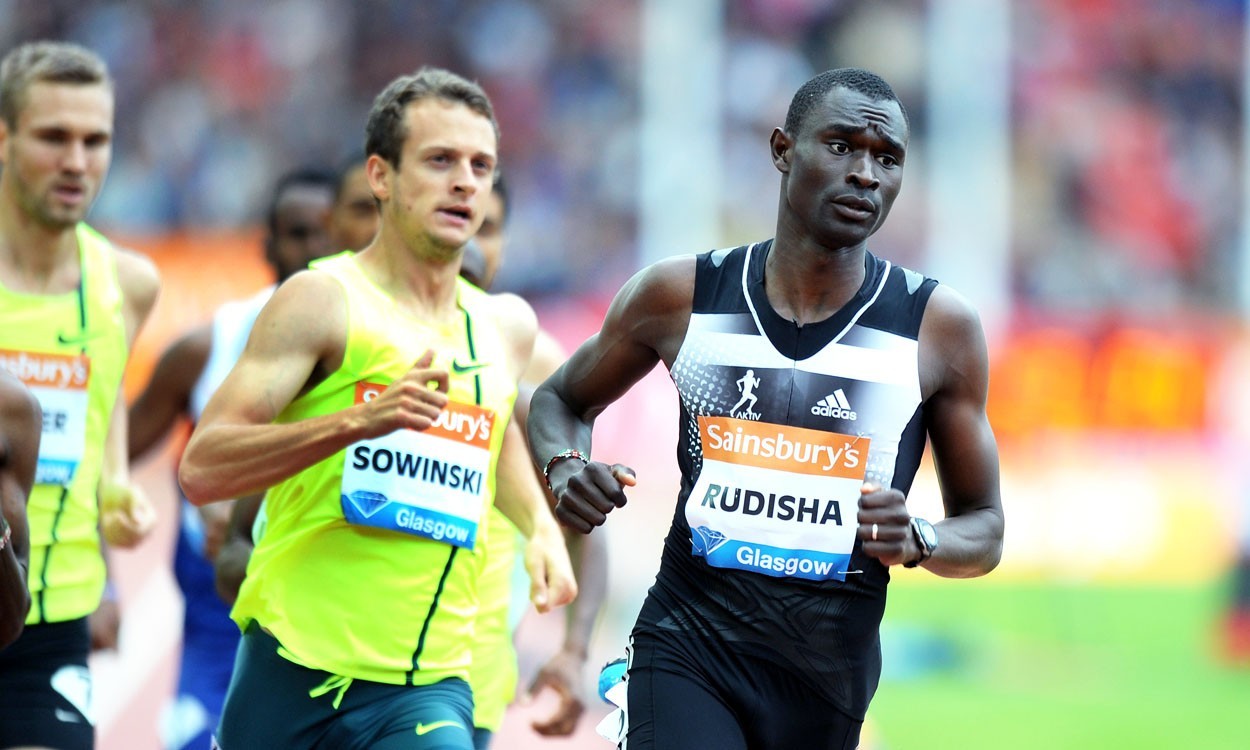 Top marks on day two of the Sainsbury’s Glasgow Grand Prix are led by the world 800m record-holder’s 1:43.34

David Rudisha in the 800m and Hiwot Ayalew in the 3000m steeplechase set the fastest times of 2014 in their events, while heptathlete Dafne Schippers showed incredible speed with a sprint double. Meanwhile, around 15,000 mainly British spectators, some of whom will be back at Hampden Park in two weeks, were treated to some great domestic performances.

Racing on UK soil for the first time since his memorable world record at the Olympics, Rudisha looked imperious once again after his atypically poor, late start to the season following injury. The Kenyan had announced he was chasing a quick time and, after closely following the pacemaker through the bell in sub-50, clocked 1:43.34 to come home comfortably in front.

It was his quickest time since his 1:40.91 in London, having missed most of last year through injury. He returned in May in Eugene with a below-par seventh, but looks to be quickly returning to his best.

“I’m getting back in to shape and I expected to run a season’s best time despite the conditions not being the best for perfect times. I’m happy to have done what I came for,” said Rudisha. “It’s a great feeling to come here to test the field and the track ahead of the Commonwealth Games so it’s a great experience for me. I will be looking for another good race there. The track is fast and with good weather and perfect everything, it could be another good run.”

Behind South African Andre Oliver’s 1:45.65 in the 800m, Michael Rimmer secured his place on the team for the European Championships in Zurich. Having won the trials, he only needed to gain the qualifier, which he did with 1:45.89 in third. Mukhtar Mohammed, having placed second in the trials, could have joined him but he was an agonising 0.06 outside the target with 1:46.56.

Ayalew and American Emma Coburn repeated their close tussle of the Paris Diamond League and again it was the Ethiopian who came out strongest over the final lap. It resulted in a world lead for Ayalew, while Coburn – as she has been threatening to do all season – set a US record of 9:11.42. Eilish McColgan prepared for her appearance at the Commonwealth Games for Scotland with a season’s best of 9:44.69 in 12th, crossing the line two places ahead of fellow Commonwealth-bound Scot Lennie Waite (9:54.62).

Yesterday Ashton Eaton and Katarina Johnson-Thompson showed their incredible all-round ability, and today another combined-eventer, Schippers, impressively clocked two Dutch records. Her win in the 100m B race in 11.03 took five hundredths off Nelli Cooman’s 26-year-old mark, but the best was to come later in the 200m, which had Diamond League status. There she took a hundredth from her own national mark with 22.34. Three-time world champion Allyson Felix was a hundredth behind and in third was Nigeria’s Blessing Okagbare with 22.41.

Schippers admitted afterwards that she was still unsure which event or events she will contest at the European Championships next month. She ranks second in Europe behind Johnson-Thompson in what is supposedly her main event, the heptathlon, but she is No.1 at both 100m and 200m.

In fourth place with 22.60, Jodie Williams recorded the fastest 200m by a Brit since Abi Oyepitan in 2004. Williams took 0.16 off her PB to move up to fourth on the UK all-time rankings. That was after she anchored Britain to victory in the 4x100m last night.

World No.1 Michelle-Lee Ayhe only just went quicker in the A race than Schippers clocked to win the B event, running 11.01, to beat into second the triple world champion Shelly-Ann Fraser-Pryce by nine hundredths. Occupying the last two places were Ashleigh Nelson in 11.36 and Asha Philip in 11.51.

New African record-holder Isaac Makwala took the 400m in 44.71, but the spectators were enthralled more by the great performances of home favourites behind.

Few in the crowd will have heard of 19-year-old Matthew Hudson-Smith, but the former European junior 200m representative justified his decision to move up from the shorter sprints by improving his PB from 45.80 to 44.97 for third. Among British teenagers only David Grindley – in 1992 – has run quicker. No one was more surprised than him with his Europeans qualifier.

Behind Martyn Rooney, fifth with 45.17, Conrad Williams also gained the Zurich mark with 45.47. As he was second at the trials, that automatically secures his selection alongside Rooney. Michael Bingham, who has clocked 45.13 this year but who withdrew from the race, looks to have lost out in the Zurich stakes to the young upstart who took his lane.

Disappointment came before the start of the men’s long jump as Olympic champion Greg Rutherford announced he was having to pull out because of a knee injury sustained in the warm-up.  “Sadly during the warm-up I’ve ended up with a nerve irritation in the back of my knee,” said Rutherford, who also withdrew from the British Championships two weeks earlier and was hoping this was just a minor setback. “I’d like to apologise ‎for not competing today and hope to make up for it in two weeks at Commonwealth Games.”

In the absence of the world No.1, it took until the fifth round for anyone to go into eight-metre territory. American Jeff Henderson was a clear winner with 8.21m as JJ Jegede was the only remaining Brit with 7.71m.

It was no surprise that the Scottish all-comers record of Kip Keino from 1970 fell in the 1500m. Silas Kiplagat led the way with 3:32.84 but of main interest to the British spectators were four PBs behind him for home athletes.

Scots Chris O’Hare and Jake Wightman clocked European qualifying times of 3:35.06 and 3:35.49 in fifth and sixth places respectively. Stadium commentator Geoff Wightman maintained his composure well as his son took an incredible 5.91 seconds off his PB. Steve Cram is the only British teenager to have run quicker than the 19-year-old.

Similarly, the women’s 800m saw top British performances behind the winner, American Ajee Wilson, who was timed at 1:59.94. Jess Judd showed much improved form from the trials and with a strong finish looked like she could break the 12-year-old UK junior mark of 1:59.75. However, she faded slightly in the last few metres, possibly hampered by being knocked and finished third with 2:00.01. Alison Leonard secured European selection by taking 1.74 seconds off her PB with 2:00.08 in fifth.

The GBR ‘A’ squad sped to a quick victory in the men’s 4x100m relay. The quartet of Richard Kilty, Harry Aikines-Aryeetey, James Ellington and Dan Talbot came home well clear of runners-up Netherlands in 38.39.

Even after Rudisha won the final track event in style, a meeting which seemed to gather momentum as it went on ended on a high. Olympic triple jump champion Christian Taylor, with the final jump of the competition, stole the lead from world No.1 Will Claye thanks to a 17.36m leap. Julian Reid was the only British competition and was seventh with a best of 16.03.

World No.1 Fabiana Murer won the pole vault to move level at the top of the Diamond rankings with Cuba’s Yarisley Silva, who was third. These and Greece’s Katerina Stefanidi in second cleared a best of 4.65m. Sally Peake warmed up for her appearance here at the Games with a Welsh outdoor record of 4.40m, which puts her third on the Commonwealth rankings.

Germany’s Thomas Rohler caused an upset in the javelin, adding more than two metres to his best with 86.99m in the final round to take the win over Diamond leader Vitezslav Vesely, who was second with 85.23m.

Blanka Vlasic continued her return to form, winning the high jump with 1.96m to go clear at the top of the Diamond standings. Britain’s Isobel Pooley was fourth with 1.89m – two places ahead of Scotland’s Jayne Nisbet (1.80m).

American Queen Harrison took the 100m hurdles in 12.58 –  a tenth ahead of Lolo Jones, who was next across the line. Olympic champion Sally Pearson, who is coming back from injury, was third with 12.87 and Britain’s Tiffany Porter was fourth with 12.88.