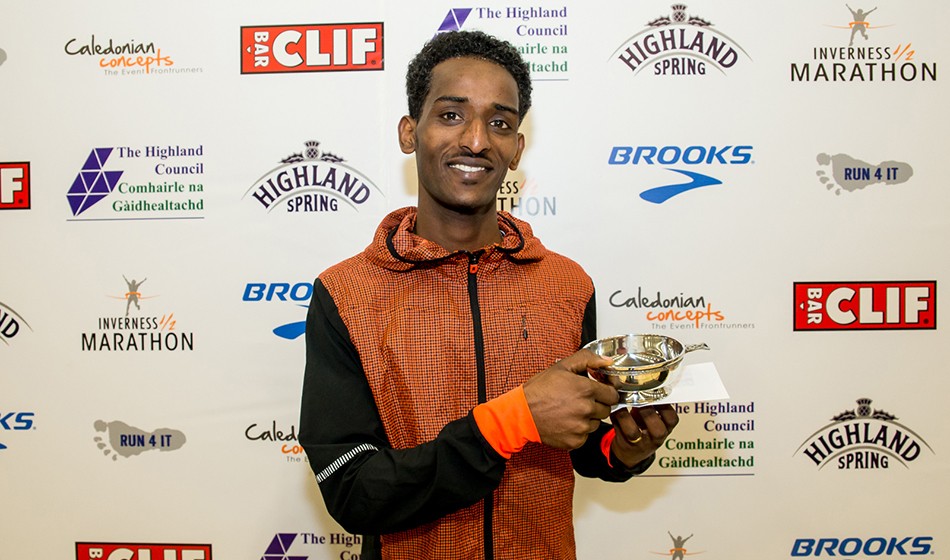 Eritrea-born marathon man has lived in UK since 2012, runs for Shettleston Harriers and wants to represent Britain at the Olympics and Scotland at the Commonwealth Games

Dewi Griffiths, Chris Thompson, Andy Vernon and Derek Hawkins are among the front runners to earn Olympic marathon selection at the British trial in London in April, but watch out for Weynay Ghebresilasie.

The Eritrean-born athlete was the fastest man in London last year from the mass start with 2:17:21 but his coach, John Mackay, believes he can go much faster and they are in a race to get the 25-year-old runner British citizenship in time to qualify for Tokyo.

Ghebresilasie ran 8:28 for the 3000m steeplechase as a teenager, finished sixth in the World Junior Championships and ran in that event at the London Olympics.

After those 2012 Games he applied for asylum in the UK and lived in Croydon and Huddersfield before eventually settling in the north-east of England in Sunderland.

Still a junior, he won the North of England under-20 cross-country title in 2013 and started the English National Cross Country Championships that year in Sunderland Harriers colours as favourite to take the junior men’s crown on his new home soil.

Struggling with a leg injury and running in snowy conditions that were alien to him, he finished third, however, and his form subsequently deteriorated as he joined Birchfield Harriers in Birmingham.

Four years ago, though, he moved to Glasgow to join Shettleston Harriers. The club has a history of helping people in the community and after the World Cross Country Championships in Edinburgh in 2008 they welcomed a number of Eritrean asylum seekers into their fold. These included Tsegai Tewelde, who went on to run for Britain in the marathon at the Rio Olympics.

Now Mackay, a teacher and coach at Shettleston Harriers, believes they can help Ghebresilasie do the same and they are hoping to hear some good news about his British citizenship application this month.

Being able to represent Britain in athletics will not be straightforward, however, given the fact he has run for Eritrea in the past, but the Olympics aside it might be possible for him to run for Scotland in the Commonwealth Games in Birmingham in 2022.

“Weynay is a big, big talent,” says Mackay. “Because of the work we’ve been doing with Eritrean athletes, it meant that Weynay decided to come to Glasgow.

“We have a good network of support here,” Mackay adds. “We got Tsegai to the Olympics and now we’re supporting some of Weynay’s altitude training.

“He comes here and works for a while and tries to pick some races to earn some cash and our club helps him with grants. We have a very strong social input into the area and have for many years.”

Ghebresilasie has been training in Ethiopia recently but is due to race in the Vitality Big Half on Sunday (March 1) from the championship start followed by the Inverness Half-Marathon on March 8, where he hopes to run sub-63 minutes and earn some money to go back to Ethiopia to train before London.

In London on April 26, he is set to start with the elite runners and Mackay hopes he will run a more sensible race than last year.

“He was crazy,” says Mackay. “He went too fast at the start and died. If you look at his splits it was terrible but it wasn’t bad for his first marathon.”