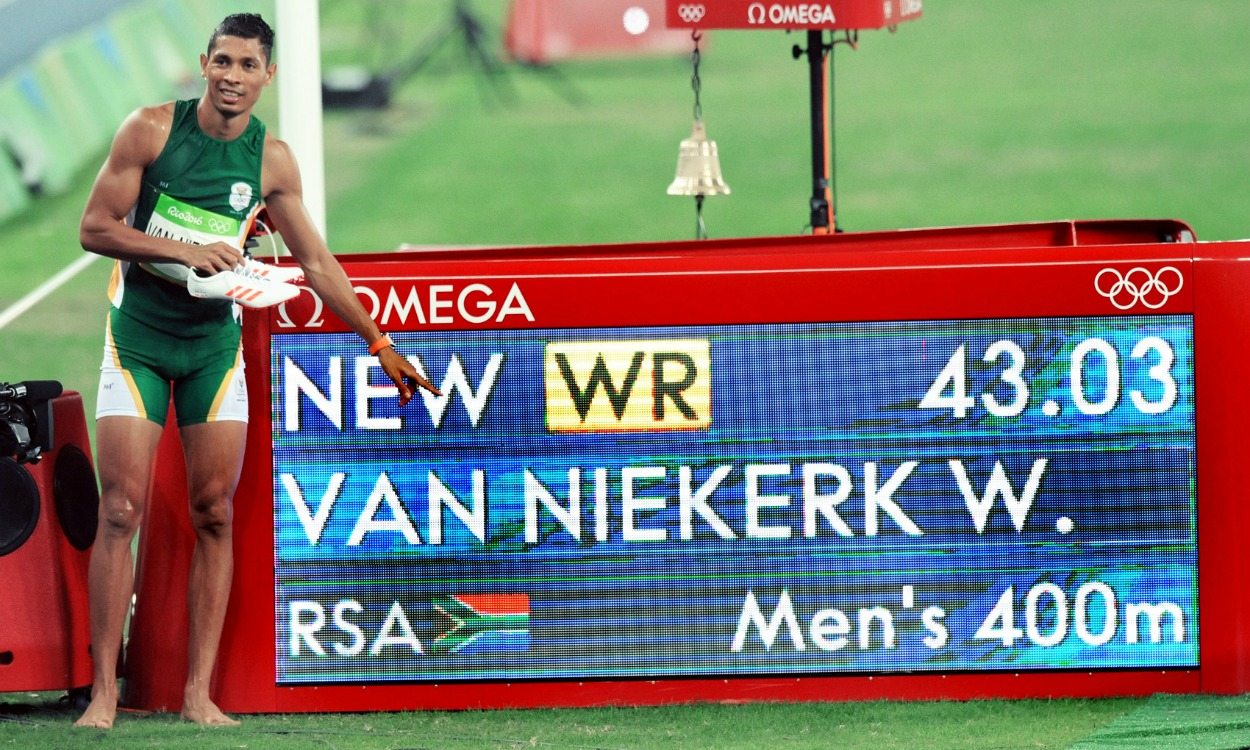 If there’s one way to get yourself noticed on a night featuring a certain Usain Bolt it’s to run quicker than anyone ever has before and that’s exactly what Wayde van Niekerk did as he stormed to 400m Olympic gold.

The South African had already made history earlier this year by becoming the first to dip below 10 seconds for 100m, 20 seconds for 200m and 44 seconds for 400m and on Sunday night in Rio he almost took that latter mark to sub-43 seconds as he clocked 43.03 to smash Michael Johnson’s world record of 43.18 from 1999.

Running in lane eight, the world champion scorched ahead to beat defending champion Kirani James, who ran 43.76 for silver, and LaShawn Merritt, who clocked 43.85 for bronze.

“I believed I could get the world record,” said Van Niekerk. “I’ve dreamed of this medal since forever. I am blessed.”

On how fast he might be able to go, the 24-year-old commented: “Achieving what I just did now, I think the sky is the limit.”

Giving thanks to his coach, 74-year-old great-grandmother Ans Botha, Van Niekerk added: “She is an amazing woman. She’s played a huge role in where I am today. She’s really kept me very disciplined and very focused and I’m just grateful that I could trust in her work and I think it speaks for itself.”

James, who won world gold in 2011, the year before his Olympic title, said: “I’m happy to be part of a race that made history. We have put this sport on a pedestal.”

Impressing hugely on his Olympic debut, Matthew Hudson-Smith had clocked a 44.48 PB to move from 13th to No.6 on the UK all-time list to make the final and there he ran 44.61 for eighth.

“That was mental and when you think how quick it was and to be part of that,” said the Briton.

“I thought I was going well on the back straight and then I got to 250m and it was going up another gear. I got to about 150m to go and I tried to kick it but it wasn’t really happening. So it just shows that I need to get more consistency in my training really.

“It’s positive and I now go on to the relay and see what I can achieve.”

The women’s triple jump title was claimed by Caterine Ibargüen, who won Colombia’s first ever Olympic track and field gold after a winning leap of 15.17m to beat Yulimar Rojas. It was a battle of the world champions as world outdoor winner Ibargüen beat world indoor gold medallist Rojas, who secured silver with 14.98m. Defending champion Olga Rypakova of Kazakhstan jumped 14.74m for bronze.

With the Games taking place in South America, Ibargüen’s win was welcomed with loud cheers, while Venezuelan Rojas secured a second medal for the continent.

“I’m very happy and content to represent my country,” said the winner. “It’s the biggest dream to achieve this.”

Like four years ago in London, Britain will have two athletes in the 1500m final as both Laura Muir and Laura Weightman safely progressed. Muir clocked 4:04.16 for third in a semi-final won by Genzebe Dibaba in 4:03.06, the pair respectively clocking 58 seconds and 57.5 for their last laps, while Weightman made her second Olympic final after 2012 with 4:05.28 for fifth in a race won by Faith Kipyegon in 4:03.95.