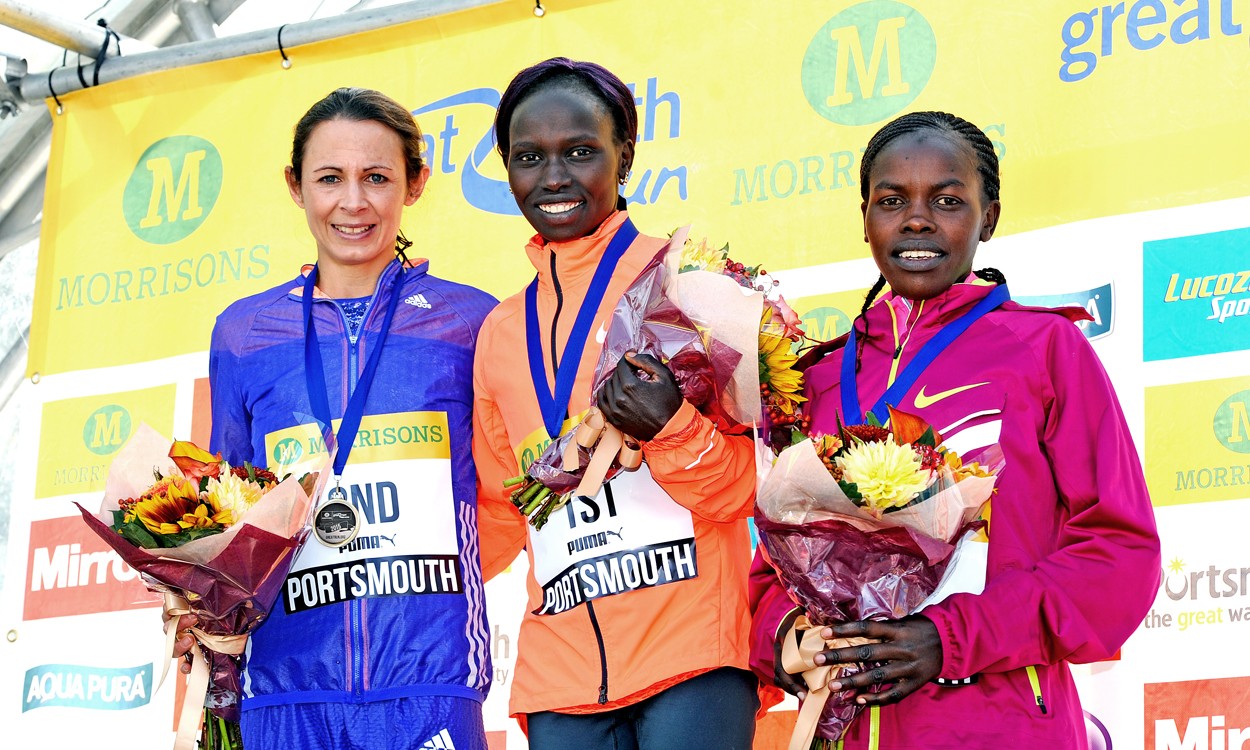 Women’s winner is just 17 seconds off the course record, while Jo Pavey sets a world over-40 best in Portsmouth and Southsea 10-miler

Vivian Cheruiyot was just 17 seconds outside the course record at the Morrisons Great South Run on Sunday morning as she destroyed the rest of the field to clock 51:17.

After Britain’s Jo Pavey set a world over-40 best and PB for 10 miles of 52:44 to finish second in the separate women’s race, Moses Kipsiro gave Uganda a victory in the men’s event with a time of 46:00.

The first British man was Ross Millington, who overtook a tired-looking Chris Thompson, who had won the Morrisons Great Birmingham Run seven days earlier, in the closing stages to clock a PB of 47:46 in 10th. Thompson ran 47:55.

Although strong winds often blight the IAAF Gold Label race taking place in Portsmouth and Southsea on England’s south coast, good conditions greeted the elite and the masses on the flat course.

Cheruiyot, a five-time world champion on the track who had not competed as far as 10 miles before, was attacking the 13-year-old course record of 51:00 held by Sonia O’Sullivan.

After relatively slow opening miles of 5:15 and 5:17 saw a lead group of eight intact, she and compatriot Doris Changeiywo broke clear for a 5:02 third mile. She shook off the challenger with further splits of 5:09 and then an impressive 4:53 to go through halfway in 25:36.

As Cheruiyot moved away for an inevitable victory, Changeiywo dropped back to Pavey and European cross-country champion Gemma Steel. However, she clung on well to the European 10,000m champion and it was only in the last-half mile that Pavey came home to a popular second-place result.

Only eight times have been recorded quicker than Cheruiyot’s. O’Sullivan’s is the quickest on a loop course. The fastest time on a point-to-point course that satisfies the Association of Road Race Statisticians’ gradient conditions is 50:38.9.

Pavey continued to defy her 42 years of age as she took two seconds off her best, set in 2006. Changeiywo was seven seconds behind, while Steel was fourth with 53:06. The next Brit was Faye Fullerton, who continued her return to form with a PB of 55:16 in seventh.

With subsequent miles of 4:41 and 4:38, Emmanuel Bett and Kipsiro pulled away. Kipsiro, the winner of the recent Bank of Scotland Great Scottish Run half-marathon and a former World Cross silver medallist, went clear from the 2013 Great South Run winner after they both ran eighth and ninth miles of 4:28 and 4:39.

Kipsang, who had already been making a late-race surge, came past Bett for second as they ran 46:08 and 46:11.