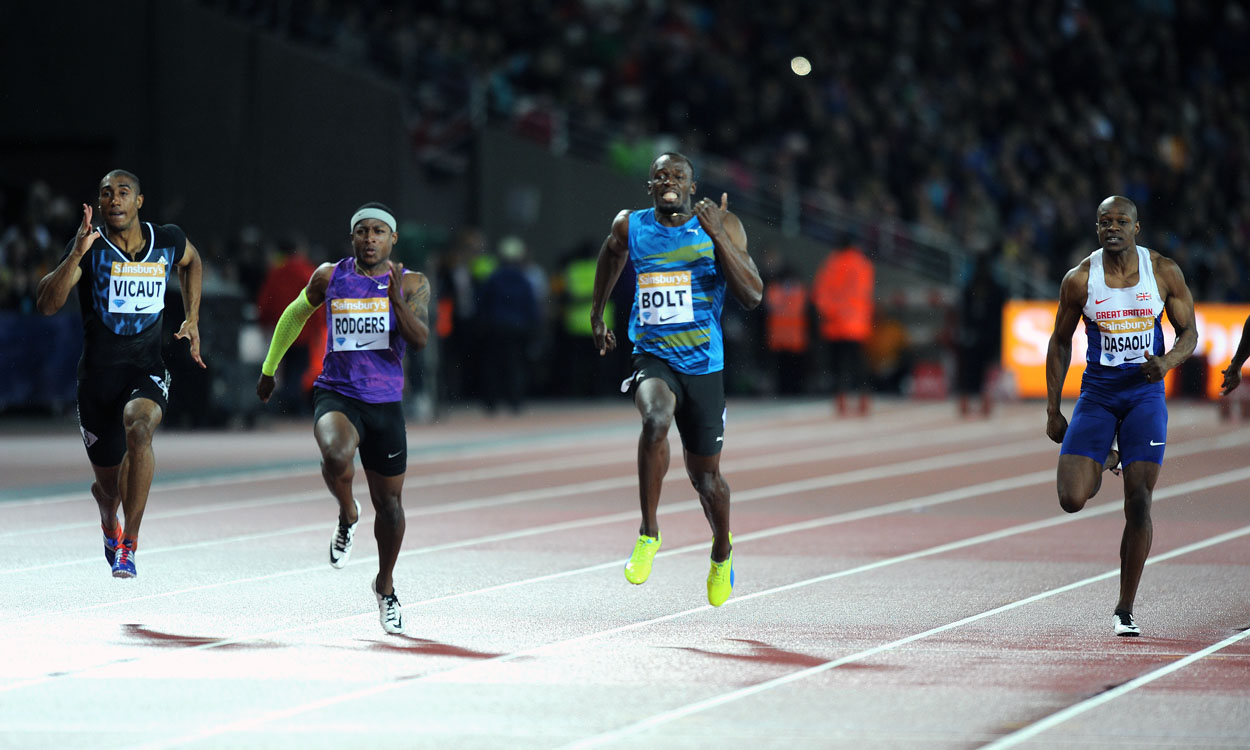 Usain Bolt let his legs as well as his mouth do the talking on Friday evening as he and Mo Farah were among those to light up London’s Olympic Stadium at the first of three sessions of Sainsbury’s Anniversary Games action.

With a heat and a final to get through after having not raced over 100m since April, the Jamaican sprint star clocked identical times of 9.87 in both rounds, with the heat run into a 1.2m/s headwind. “Today has helped because I can see my plans coming together,” he said later, with success at the IAAF World Championships in Beijing his aim, despite an interrupted season so far.

“Anything is possible in Beijing, it’s all about the effort you put in,” added the six-time Olympic and eight-time world gold medallist, whose last race had been over 200m in New York on June 13 after he withdrew from meetings in Paris and Lausanne following a pelvic problem.

“I felt good,” he said. “My coach was happy with my transition, I’m feeling happy with my start and my last 50 metres was good. But in the final I got a really bad start. I kind of lost focus for a minute and I lost my form but I got it back at the end. So it taught me a lot, these two races.”

A total of five athletes dipped under 10 seconds in the final, Bolt leading Michael Rodgers, Kemar Bailey-Cole, Chijindu Ujah and Jimmy Vicaut. For Britain’s Ujah, it was the second time he had broken the barrier in his career so far, his 9.96 matching the time he ran in June 2014.

“I just want to build on this ahead of Beijing,” he said. “This is my first time running in the stadium so this is all quite new to me – the atmosphere is just electric. I wanted to pull out the performances because I knew I was capable of it.”

Ujah had been joined by his fellow Briton James Dasaolu in the final, but Richard Kilty – the world and European 60m champion – had been disqualified from the second 100m heat for a false start. Kilty’s reaction time had been 0.099 – just one thousandth of a second under the limit allowed.

Like Bolt, Farah was warmly welcomed back to the scene of his London 2012 triumphs, receiving a rousing reception as he lined up at the 3000m start line. While a British record-breaking performance never really seemed on the cards, the double Olympic, world and European champion enjoyed a two-second victory in a world-leading and stadium record time of 7:34.66. It is also the quickest he has ever run the distance outdoors and came after a 55.34 last lap. 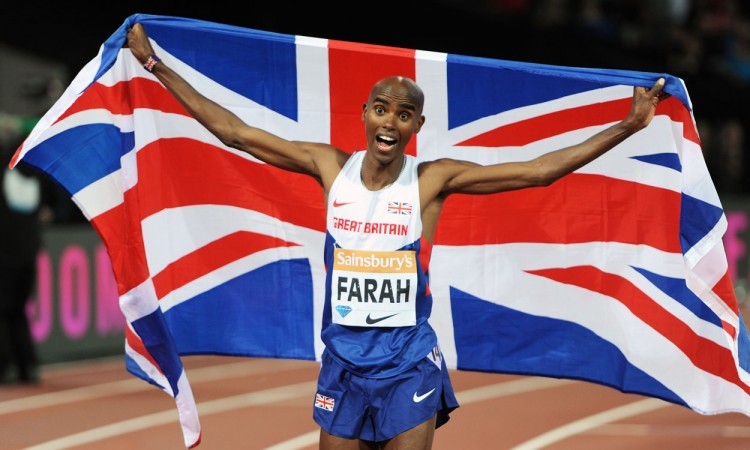 The race was Farah’s first in the UK since doping allegations were made against his coach, Alberto Salazar, at the beginning of June. The 32-year-old had been due to run the 1500m at the Sainsbury’s Birmingham Grand Prix on June 7 but withdrew saying he had been left “emotionally and physically drained” following the events of the days before.

“I got amazing support tonight which was incredible,” he said. “It meant everything to me tonight. This is where I made my name and it changed my life to win and become Olympic champion here.”

On going for the British record, he added: “I was interested in the British record but I was tired. I went with the pace and had to make a decision. I looked at the screen and the guys were following me so I had to decide, do I want to win the race or try and go for the time, and it was important for me to win rather than get a fast time.”

Commenting on whether the race had given him confidence ahead of Beijing, he said: “I’m confident but you never know. The Kenyans and the Ethiopians are really strong. There’s always someone coming through and the depth is really strong. I shouldn’t take it for granted but at the same time, no pressure, I should go out there and try and win the 10,000m for sure and then the 5000m is going is going to be a little bit tougher I think.”

Earlier on and Zharnel Hughes had gone to third on the UK 200m all-time list behind only John Regis and Adam Gemili, his 20.05 securing him his second Diamond League victory after his win in Lausanne earlier this month. Dedric Dukes, the American who has run 19.99 this season, ran 20.14 in second as Jamaica’s Nickel Ashmeade was fourth in 20.24 and Britain’s Danny Talbot finished sixth in 20.56.

There was a welcome confidence boost for Jessica Ennis-Hill, who is using this meeting to test herself ahead of making a decision as to whether she will compete at the World Championships next month. Her 12.79 for fifth in the 100m hurdles is her joint second fastest ever time – she has only gone quicker at the London 2012 Olympics – and it was clocked into a -1.2m/s headwind. The race was won by USA’s Jasmin Stowers in a meeting record time of 12.47, as sisters Tiffany Porter and Cindy Ofili finished fourth and sixth with respective times of 12.67 and 12.90. Serita Solomon did not finish.

USA’s Olympic silver medallist Jason Richardson pipped Pascal Martinot-Lagarde to the line in the 110m hurdles, the Frenchman clattering the final barrier and having to settle for the runner-up spot – 13.19 to 13.22. World record-holder Aries Merritt finished fourth in 13.32, one place ahead of world leader Orlando Ortega with 13.32. British duo Lawrence Clarke, who knocked the first two hurdles, and David Omoregie clocked 13.67 and 13.77 respectively. Speaking ahead of the event, newly-crowned European under-23 champion Omoregie had said how he hoped the world-class fields in London would push him on to a quick time and the Welshman made the most of the opportunity in the first round, clocking a 13.50 PB for third in the second heat.

In the women’s 1500m, Britain’s Laura Weightman hit the front at the bell and that’s where she stayed – crossing the line in 4:06.09 after a 63.60 final lap to beat USA’s Gabriele Grunewald with 4:06.35. Ethiopia’s world junior silver medallist Gudaf Tsegay took a tumble on the back straight and finished eighth before leaving the track in a wheelchair.

Natasha Hastings ran a season’s best to take the evening’s first track event – the 400m – in 50.24. She led a US 1-2 as world leader Francena McCorory was next over the line in 50.67. World champion Christine Ohuruogu finished fourth in 51.00 while her fellow Brit, Seren Bundy-Davies, was another Welsh athlete not put off by the wet conditions as she ran a personal best of 51.48 from lane one for seventh, one place ahead of Anyika Onuora with 51.51.

Following a short break in the competition because of the weather conditions, Belgium’s Philip Milanov threw 65.14m in the fourth round to take the lead in the discus and that remained enough to secure him the win ahead of  Poland’s Robert Urbanek with 64.47m. Diamond Race leader Piotr Malachowski finished fourth with a best of 63.83m from the second round.

The men’s high jump was won by Marco Fassinotti with 2.31m, the Italian having also attempted a national record height of 2.35m, as Mutaz Essa Barshim failed his three attempts at the winning height. Britain’s Robbie Grabarz cleared a best of 2.24m. Olga Rypakova continued her winning ways at the stadium, the Olympic champion saving her best leap until last to win the triple jump with 14.33m. Britain’s Sinead Gutzmore placed fourth with her 13.54m PB.

The rain caused the men’s pole vault to be postponed until Saturday, with the wet conditions meaning it was deemed too unsafe for the competition to go ahead.