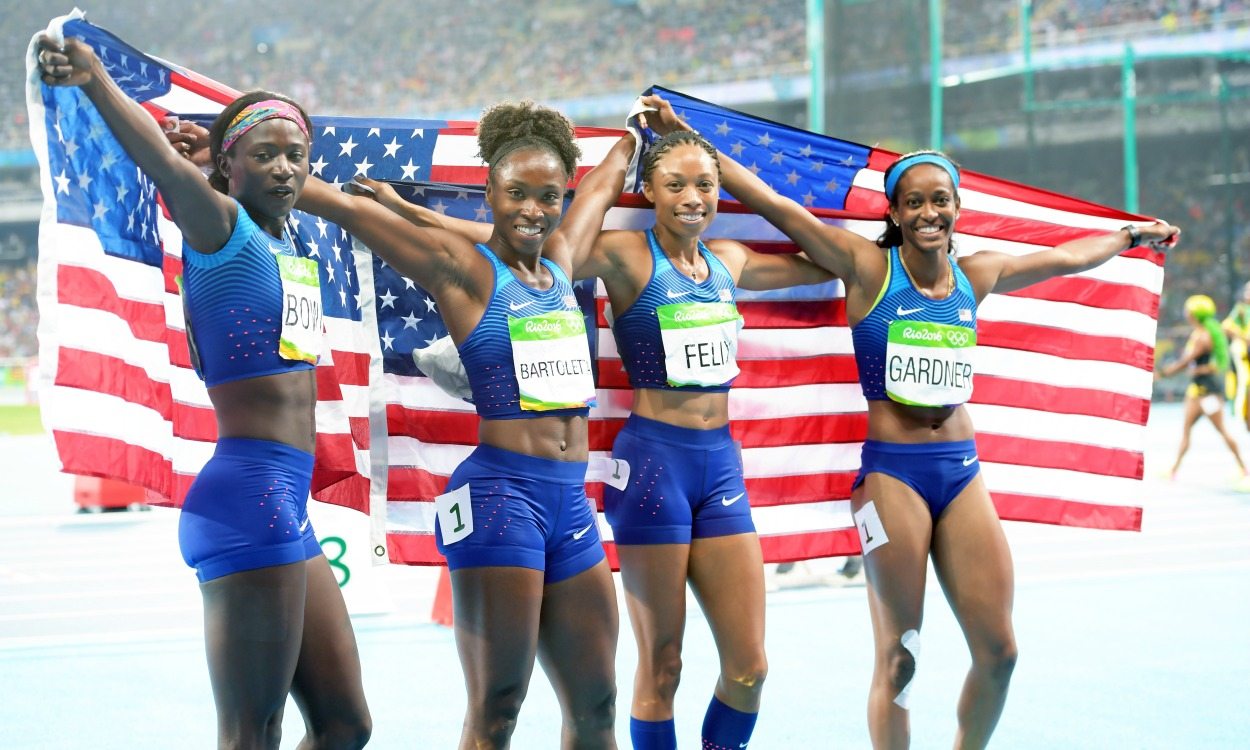 The United States sprint relay quartet of Tianna Bartoletta, Allyson Felix, English Gardner and Tori Bowie completed a remarkable story when they won 4x100m gold in the second fastest time ever after qualifying for the final with a solo re-run in the rounds.

The US quartet was disqualified in their heat for dropping the baton but later allowed to race again in a time trial after it emerged they had been bumped during the race.

A surreal qualifying effort where they ran alone ensued – and was a success – before they took their place in the tight, inside lane in the final on Friday night in the Estadio Olimpico.

Once there, Bartoletta, the individual long jump champion at these Games, blasted from the blocks to hand over to Felix, then Gardner and finally Bowie as the team scorched to a 40.82 victory – a time second only to the world record they set in London 2012.

In a terrific sprint relay race, Great Britain took bronze in a national record of 41.77 as they chased runners up Jamaica home. It marked the first British medal in the event since 1984.

Asha Philip, Desiree Henry, Dina Asher-Smith and Daryll Neita combined to create history – a remarkable performance from a GB squad that was at an all-time low four years earlier after failing to qualify for the London Olympics.

“We have worked so unbelievably hard as a team,” said British 100m and 200m record-holder Asher-Smith. “We have had relay practices since January to get it right.”

Asha Philip added: “I had seen our team not make London 2012 so we have come a long way to get here and it has been a long journey for us.”

In the men’s hammer, Dilshod Nazarov sealed the Olympic hammer title with 78.68m from Ivan Tsikhan and Wojciech Nowicki. The Tajikistan athlete won silver at the World Championships last year in Beijing but graduated to the top of the rostrum here in Rio.

In the women’s 4x400m, Jamaica and the United States won their heats with Great Britain comfortably qualifying behind Jamaica.