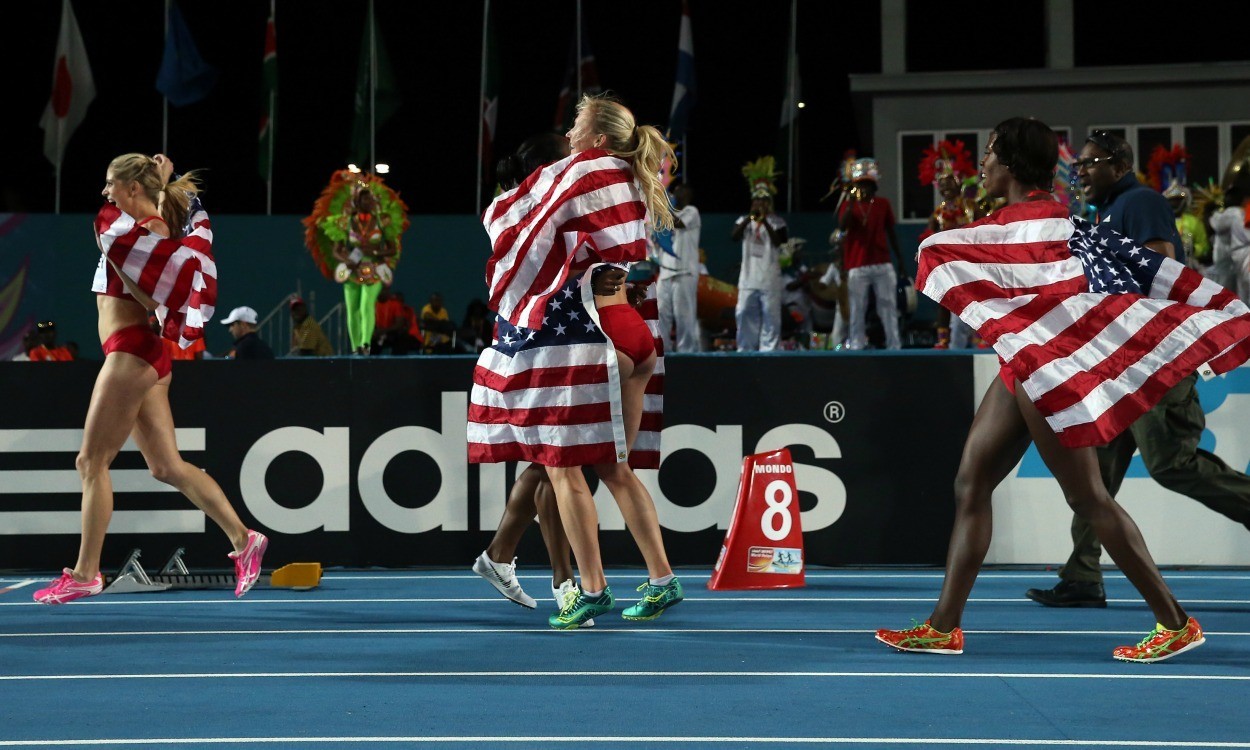 USA successfully defended the golden baton for being the most dominant team at the IAAF World Relays in Nassau, Bahamas.

The team won seven of the 10 events which saw them easily repeat their overall victory of 12 months ago ahead of Jamaica.

USA picked up from where the nation had left off on the second day of World Relays action, securing a dominant victory in the women’s 4x800m that saw anchor Alysia Montano cross the finishing line almost 11 seconds clear ahead of Poland. Clocking 8:00.62, the US team beat the competition best and area record set last year by almost a second. World indoor 800m champion Chanelle Price had led the team off and clocked a 2:01.30 split before Maggie Vessey ran 2:00.92 to create a three-second lead at half way. Molly Beckwith-Ludlow then clocked 1:59.50 which increased the team’s advantage to five seconds before Montano ran the fastest split with 1:58.90. Poland secured the runner-up spot with a national record of 8:11.36, beating Australia with 8:13.97.

USA’s men matched the world record-breaking performance of their female team-mates in the distance medley, clocking 9:15.50 to take 0.06 off Kenya’s nine-year-old mark. Kyle Merber started things off by running the 1200m before handing the baton to Brycen Spratling who covered one lap of the track. Brandon Johnson ran 800m before Ben Blankenship took on the final 1600m leg, seeing off the challenge of Kenya’s Timothy Cheruiyot to finish a second and a half clear. Kenya clocked 9:17.20 in silver, while Australia took bronze with 9:21.62.

“It is always a good competition between the USA and The Bahamas,” said Verburg. “We knew that we’re competing on their territory, so there would be a lot of hype, but we fed off of it and used it to our advantage.”

Great Britain won the first of the nation’s two sets of bronze medals in the women’s 4x400m final as European indoor bronze medallist Seren Bundy-Davies worked well to hold off Floria Guei – who formed part of France’s gold medal-winning teams at the European indoor and outdoor championships – on the last leg. Eilidh Child (52.82), Anyika Onuora (50.94) and Kelly Massey (51.00) completed the team. Bundy-Davies ran her anchor leg in 51.62 to cross the line in 3:26.38 to France’s 3:26.68. Cuba won the women’s ‘B’ final.

“I thought ‘I’m in such a good position, just hold on to everything you have got’,” said Bundy-Davies. “I couldn’t see her (Guei) and that’s a good thing. I just kept on going.”

There was a place on the podium for Belgium in the men’s event as a team comprising the three Borlee brothers – Dylan, Jonathan and Kevin – combined with Julien Watrin to break the national record with 2:59.33. A Great Britain team of Conrad Williams, Rabah Yousif, Jack Green and George Caddick finished sixth and by making the final and completing the race secured GB a spot in next year’s Rio Olympic Games.

With a Jamaica team including Usain Bolt having lost to the USA in the men’s 4x100m final the day before, a quartet of Nickel Ashmeade, Rasheed Dwyer, Jason Livermore and Warren Weir was determined not to let that happen again. Their victory wasn’t all smooth, though, and a messy second handover slowed things down, but their performance went better than that of the US team, with the American quartet disqualified after their baton hit the track and Curtis Mitchell left his lane to pick it up before running his leg. Jamaica clocked 1:20.97 for the win ahead of France with 1:21.49 and Germany with 1:22.65.

Bolt had been included in the team for the 4x200m as well as the 4x100m but withdrew with a tight hamstring before the heats, something his manager Ricky Simms described as “just a precaution”. Standing on top of the podium, the winning Jamaican team all did Bolt’s signature pose.

A second victory for Jamaica was claimed in the women’s 4x100m as Schillonie Calvert, Veronica Campbell-Brown, Kerron Stewart and Simone Facey saw off an American team featuring three members of the world record-breaking squad from London 2012 – Tianna Bartoletta, Allyson Felix and Carmelita Jeter – as well as Kimberlyn Duncan. A world-leading 42.14 secured Jamaica the win ahead of USA’s 42.32.

“After the heats we just wanted to come out to the final and get our spot for the Rio Olympics,” said Nelson. “We missed out on London and it was devastating. We just wanted to cement a place and getting a medal is an added bonus.”

You can find a round-up report covering the first day’s action here, while a picture round-up of day two is here.