US gold rush at World Indoors 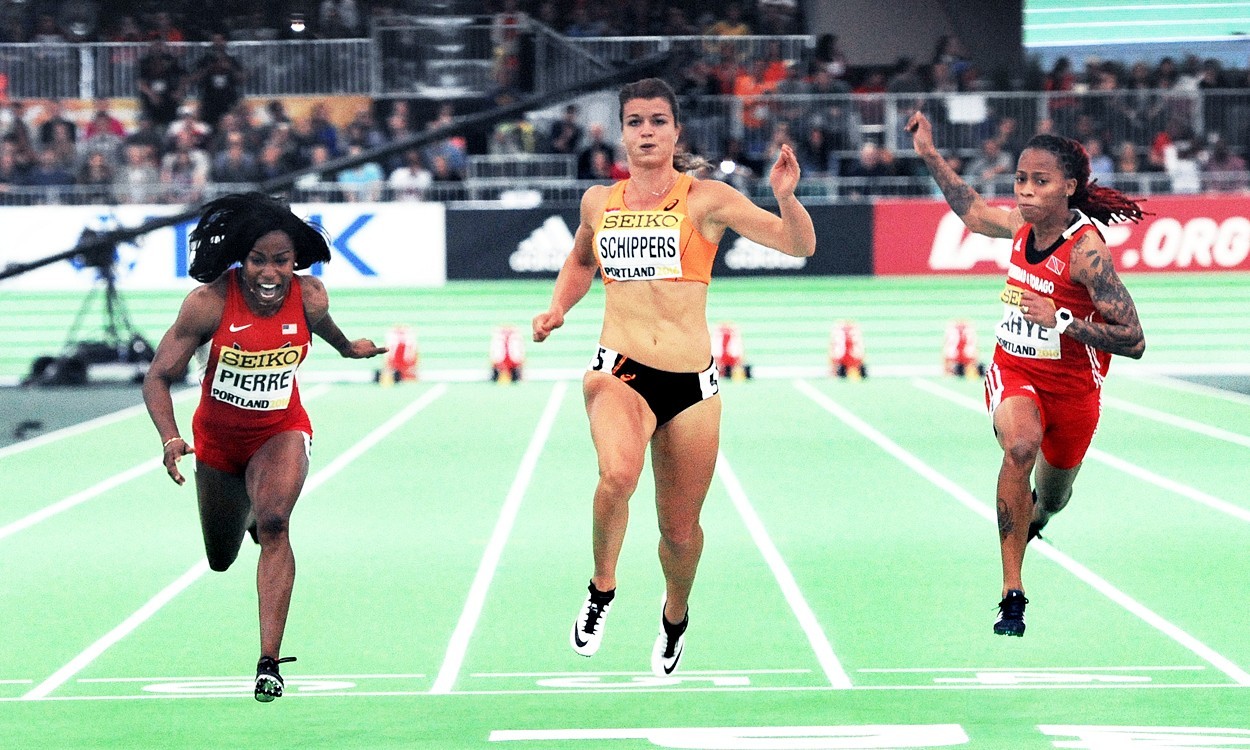 Host nation cements its place on top of the medals table, while Robbie Grabarz takes high jump silver for Britain on Saturday in Portland

Barbara Pierre was one of four American winners on Saturday night at the IAAF World Indoor Championships as she beat Dutch sprinter Dafne Schippers over 60m.

On a successful night for the host nation, Pierre clocked 7.02 to beat world 200m champion Schippers by two hundredths of a second as Elaine Thompson of Jamaica was third.

GB team captain Asha Philip was fifth with 7.14 while fellow Brit Dina Asher-Smith did not start due to a hamstring injury after she had earlier cruised through her semi-final.

Britain did win a medal in the high jump, though, as Robbie Grabarz took silver behind Gianmarco Tamberi.

Since winning Olympic bronze in 2012, Grabarz has struggled to find his form due to injuries, but for a while in Portland he looked like he could win gold as he soared over 2.33m at his first attempt as Mutaz Essa Barshim of Qatar struggled with injury.

Italian Tamberi – an athlete famous for sporting half a beard – cleared 2.33m at his third try, however, and then 2.36m to seal the title. In third, Erik Kynard added to the American success on the night, while Grabarz’s GB team-mate, Chris Baker, cleared 2.29m for eighth.

Grabarz said:  “I’m ecstatic. I just can’t believe it, to be honest. If someone would have said that would be the result two years ago I wouldn’t have believed it and I would have bit your hand off.

“They (Barshim and Kynard) looked very, very far away, but it just made me train harder and harder – just on the days I didn’t really want to get out of bed. I’ve been able to compete with these guys and get a medal and that’s great.”

The US gold rush had started earlier in the women’s shot put. With a dramatic and huge last round throw of 20.21m, Michelle Carter won a tremendous contest that had witnessed multiple leaders through the six rounds.

One of the early leaders was Valerie Adams, the New Zealand Olympic champion keen to reestablish herself after surgery, as she threw 19.25m. But Carter went into pole position, only to see Anita Marton throw a Hungarian record of 19.33m to go into the lead in the final round.

Carter still had to throw, though, and unleashed a world-leading mark for 2016 to give the United States a home victory.

Marton had to be satisfied with silver as Adams took bronze in a memorable competition.

Boris Berian was rewarded for his front-running bravado in the men’s 800m as he held on for gold. The American blasted through 400m in 49.73 and faded with a 56.10 second half, but his rivals were also struggling and he came home in 1:45.83 as Antoine Gakeme of Burundi took silver almost a second behind and Erik Sowinski earned another medal for America in third.

Front running did not work for Bralon Taplin in the men’s 400m, though, as the Grenada sprinter was overtaken in the home straight by defending champion Pavel Maslak of the Czech Republic.

Oluwakemi Adekoya of Bahrain took the women’s 400m in an Asian record of 51.45 from US duo Ashley Spencer and Quanera Hayes.

Sifan Hassan won the 1500m in 4:04.96 as she held off the challenge from Ethiopians Dawit Seyaum and Gudaf Tsegay to give Netherlands its first title in the event since Elly van Hulst in 1985.

Bin Dong took men’s triple jump gold with 17.33m. The Chinese athlete was always in control from the first round and held off the challenge from German teenager Max Hess and Frenchman Benjamin Compaore.

Ashton Eaton was one of the strongest favourites of the championships and the combined eventer cruised to victory in the heptathlon as he contributed to the US success, although his score of 6470 was short of his world record. Behind, Oleksiy Kasyanov of Ukraine took silver almost 300 points behind the American.

In qualifying rounds, Lawrence Clarke made it through the 60m hurdles heats as one of the fastest losers after finishing fourth in a close race with 7.74.