Travel: Racing and training in Malta 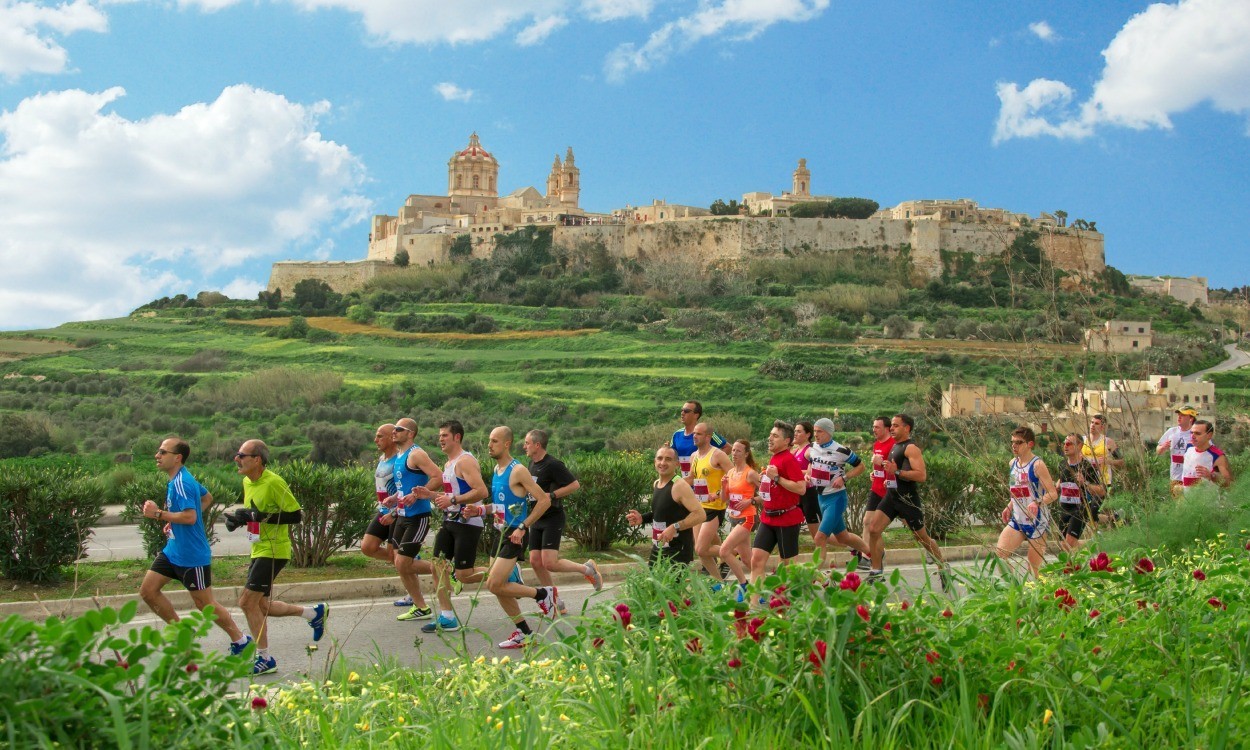 Whether it’s competition or training you’re after, Malta could be the ideal destination as AW discovered when making a visit for the Malta Marathon

Spring is almost upon us and chances are you’re getting ready to head out on your next block of warm weather training or possibly churning out the miles ahead of a spring marathon.

Ahead of running the Virgin Money London Marathon in April, Jessica Whittington was among the 569 British runners who signed up for this year’s Vodafone Malta Marathon events, which also include a half marathon and walkathon, and found it to be an ideal destination for athletes searching for warm weather training or race opportunities or those wishing to combine their love of the sport with somewhere with plenty of history and culture to explore.

The Maltese archipelago is located almost in the centre of the Mediterranean, just south of Sicily and north of Africa. As you would expect, Malta’s climate is typically Mediterranean with hot, dry summers and milder winters still offering plenty of sunshine. Temperatures average from about 15°C in November to April, rising to around 33°C from May.

Malta is the biggest of the three main islands, with Gozo and Comino much more rural, and you can fly to Malta’s international airport in just over three hours from the UK which means it can work as a short-break destination as well as a longer holiday haven. As a result, 454,659 Britons were among the 1.6 million visitors to Malta in 2013, a 9.3% increase on 2012.

The Malta Marathon, half marathon and walkathon is the island’s most popular international annual sporting event and follows a course from Malta’s old capital Mdina to the coastal resort of Sliema. The high cliffs on one side of the country taper down to sea level on the other coast, and this is reflected in the race route, as runners start at the highest and finish at the lowest point on the island, albeit encountering a fair bit of undulation on the way. 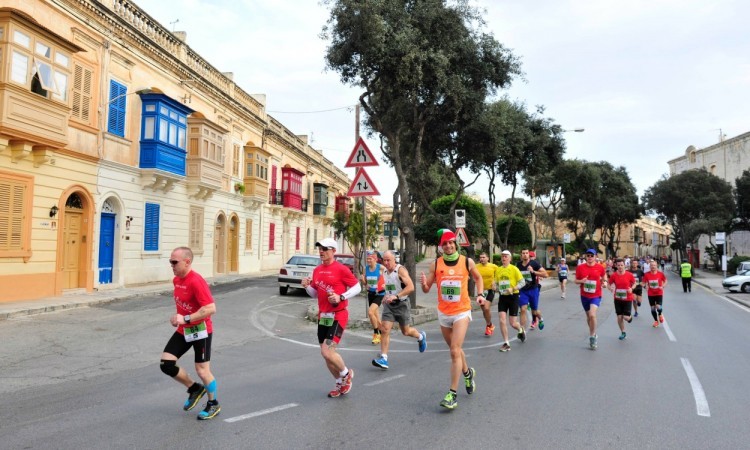 In 2014 the men’s marathon was won for the fourth time by course record-holder Mohammed Hajjy of Morocco in 2:18:27, while Josann Attard Pulis delighted home crowds with her 3:00:20 for victory. The half marathon races were won by Ibrahim Hussen in 70:24, ahead of British athletes Gary Pennington and Mike Scott, and Italy’s Elga Caccialanza in 80:13. Those runners who weren’t travelling quite as quickly were able to enjoy the route’s scenery, though admittedly for parts this was a central city scene as the marathon route went from Mdina, along the main road of Rabat, down through Nigret and on to the Mtarfa bypass to Ta’Qali. After another loop the marathon route met the half-marathon course at around 26km, with both sets of runners passing Attard and then on to the crowds of supporters in Sliema.

With Vodafone as the race sponsor, runners were able to take advantage of automatic photo uploads to social networking website Facebook which meant pictures could be seen on users’ timelines before they had even crossed the finish line. Those who had signed up had pictures automatically uploaded via Vodafone’s 3G and 4G networks as the photographers took them. The pictures are tagged through the scanning of the barcode on runners’ bibs, which means friends and family not at the race can also ‘follow’ you as you run and you can re-live your Malta Marathon experience for free once over the finish line, which is a nice extra touch.

Other events and training

If you’re looking to combine a trip to Malta with your love of the sport then you’re in luck as there’s a number of year-round events you can choose from (see ‘What’s on’ section below).

While the likes of the Malta Marathon programme and Gozo Half Marathon cater for road runners, event organiser Hellfire has a series of races for those who fancy something a bit different. Events include the Eco Gozo 55km Trail which takes ultra runners pretty much right the way around the island’s coastline. It is an Ultra-Trail du Mont-Blanc qualifying race, worth one point. 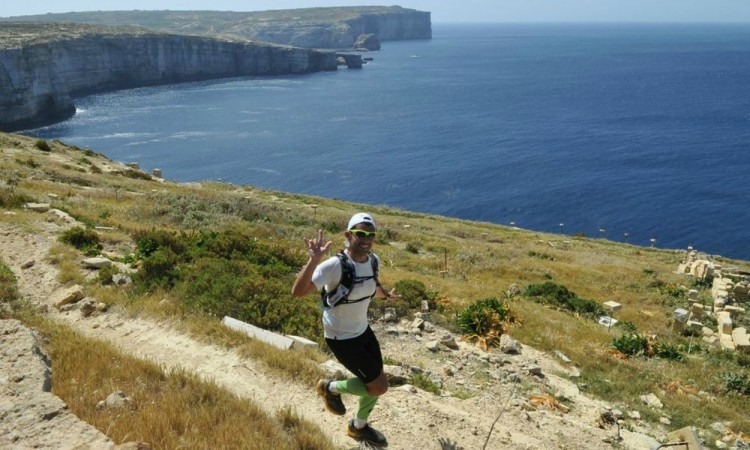 As with many events, the Hellfire series is created by athletes for athletes. But with one of the organisers, Nathan Farrugia, having run a world record 27 marathons in 27 days in the then 27 EU countries for charity in 2011 as well as completing the Marathon Des Sables in 2010 and the UTMB in 2012, the team know extreme events well. The series also includes the Extreme Triathlon and Lungbuster.

If track and field is more your scene, many British athletes also travel to Malta for international competition and warm weather training. The Marsa Stadium at the Marsa Sport Complex is the island’s national athletics venue and boasts an eight-lane all-weather track as well as high jump, long jump, triple jump, pole vault, shot put, discus and javelin facilities.

Malta and Gozo offer a year-round calendar of running and triathlon events. Here’s a few.

» Hellfire Lungbuster – November 2014
Boasts a gradient change of 10% over the 9km course.
hellfirevents.com

» Express Trailers Zurrieq Half Marathon and 10km – November 2, 2014
Organised by the same team as the Malta Marathon.
maltamarathon.com

Make a break of it

If you’re visiting Malta for something sporty why not enjoy some of the other things the islands have to offer?

» Valletta
The capital of Malta was built by the Knights of St. John after the Great Siege of 1565. Today, it’s a UNESCO World Heritage City and has been named the European Capital of Culture for 2018.

» Mdina
Malta’s old walled capital provides stunning views of the island as well as a great deal of history.

» Sliema and St. Julian’s
These towns are Malta’s main coastal resorts with plenty of shops, entertainment and restaurants on offer. 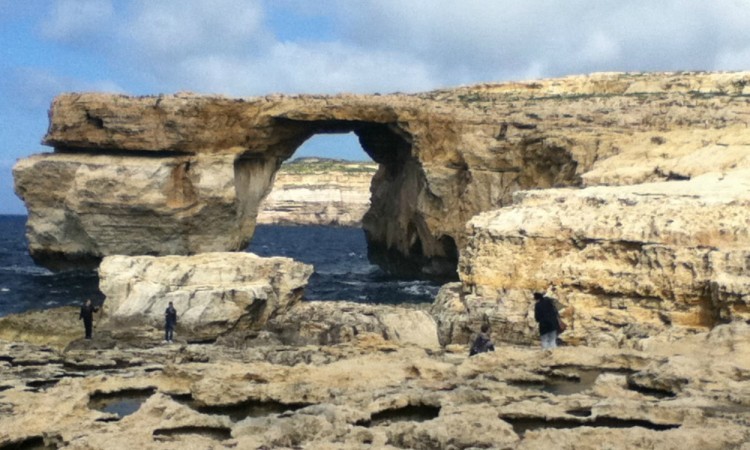 » Gozo
Take a short ferry trip to Gozo and you can explore the likes of the Ggantija Temples – the oldest freestanding structures in the world – and the Azure Window in Dwejra for beautiful coastal views.

» Flights
There are direct flights to Malta with the national carrier Air Malta as well as a number of international airlines departing from 15 regional airports. Air Malta operates a year-round scheduled service of up to 26 flights per week from Heathrow, Gatwick and Manchester with fares from £74 one way, inclusive of taxes and 20kgs of baggage. Air Malta also operate regional summer charter flights from Bristol, Cardiff, Birmingham, Newcastle, Exeter, Norwich and Glasgow. See www.airmalta.com.

» Accommodation
There are plenty of places to stay on the Maltese islands. From five-star luxury accommodation in hotels such as The Palace in Sliema – AW’s plush base for the weekend – to farmhouses, hostels and camping you should be able to find somewhere that suits your requirements and budget. If you’re really looking to treat yourself, The Palace boasts a number of luxury designer suites with a spa, gym and rooftoop pool among the hotel’s offerings. It is comfortable and friendly with the service and facilities you’d expect from five-star accommodation and just 10km from the airport and a short distance from the Malta Marathon finish line. See www.thepalacemalta.com.