How they train – Ellie Greenwood 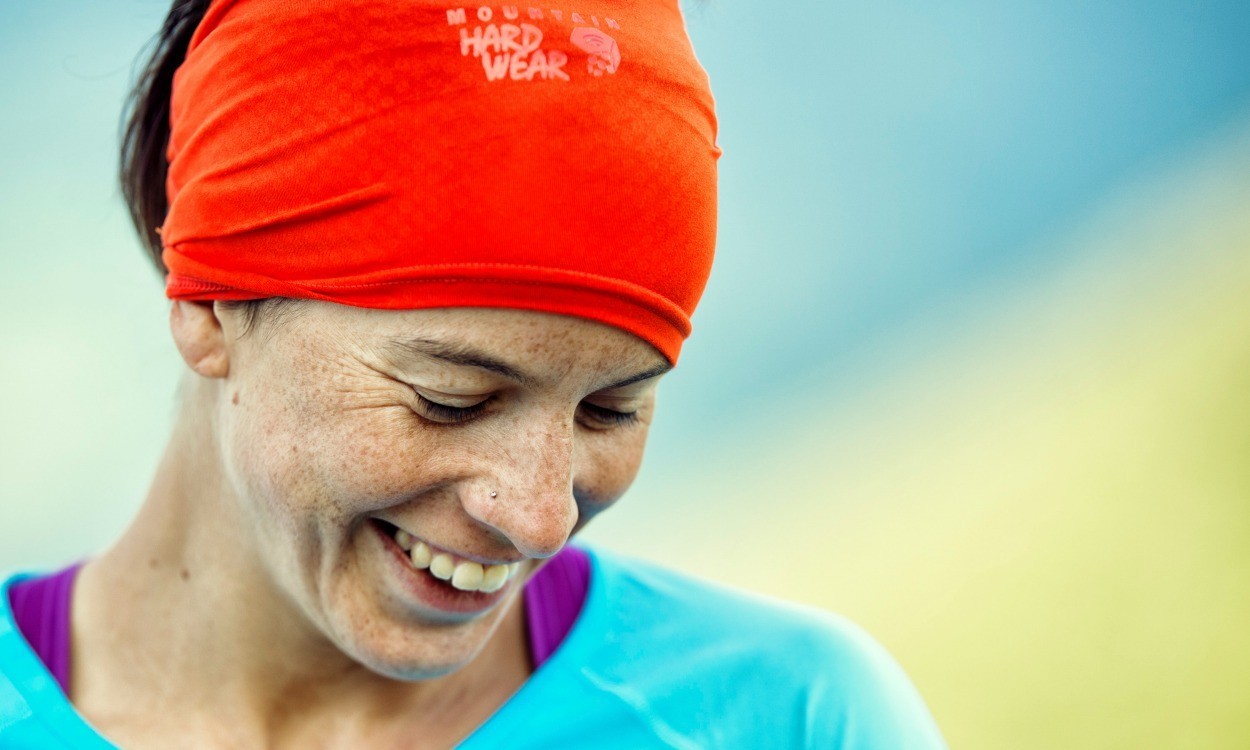 The first British woman to win the world’s most famous ultra-marathon, Ellie Greenwood spoke to AW about the physical and mental demands of ultra running

In winning the prestigious and globally renowned Comrades Marathon recently, Ellie Greenwood entered the history books as the first British woman to record a victory over the grueling 89km (56 miles) event. 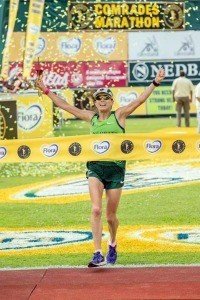 Breaking the tape at the finish, Greenwood stopped the clock at 6:18:15 to win by more than five minutes from Russia’s Elena Nurgalieva. Remarkably, the Scottish-born, Canadian-based ultra-distance runner was four minutes down after 20km, and almost seven minutes in arrears with only 19km remaining. But with near-perfect pace judgment, the 35-year-old Greenwood chipped away at the seemingly impossible deficit to reduce the distance to just three minutes with 7km remaining.

The native of Dundee finished strongest though, running at around 40-minute pace for 10km while the Russian slowed markedly with her sister Olesya finishing a further 400m adrift.

Greenwood, who struggled with injuries in 2013, said: “When I was coming back from injury I realised that I would have to be patient and listen to my body. I was eager to get back into running right away – too eager – and I knew that could put me in a position of risking more injury.

“I didn’t push myself too much too soon though and I also didn’t set myself an aggressive timetable for my return to running. I also took some downtime, even if it was for just a day or two if an old injury flared up to ensure that any small problems were nipped in the bud before they became much bigger issues. Nevertheless, I did set a goal with a sensible time-frame to keep me motivated and for me this was the Comrades.”

Although most athletes are satisfied with a diet of 10km races and the odd sojourn over the half-marathon distance and an even rarer dabble at a full marathon, Greenwood doesn’t do things by halves. After all, on her CV are two victories in the Western States 100-mile trail race and a highlight, until recently that is, the world 100km title.

“Normally, I like to run big miles as I really enjoy just getting out and running. However, in preparing for the Comrades this year I focused on doing less miles, but importantly using those miles more wisely”

Training for a distance that is more than twice as long as the longest championship running event, Greenwood adds: “I was walking a tightrope of re-injury at times and I was forced to focus more on the quality of training rather than quantity. Normally, I like to run big miles as I really enjoy just getting out and running. However, in preparing for the Comrades this year I focused on doing less miles, but importantly using those miles more wisely.

“In preparation, I did three key races – a 50km trail race in March to give me the confidence over the longer distances and also, allowing plenty of time for recovery, a half-marathon in April to focus on sustained speed, which is needed for the Comrades, and four weeks pre-Comrades I ran a road marathon to keep my motivation in training up and to put in a hard effort without going all-out.

“All three of these races were also good indicators of how my training was going and where my fitness level was.”

It takes a special kind of mentality to take on the daunting prospect of running and racing for at least six hours. The Vancouver Falcons AC member says: “My mindset for the training was that I was going to put all my eggs in one basket and really focus on doing my best possible race at the Comrades. In 2012 I came second and was only 72 seconds behind the winner, so I knew that literally every second counted. I concentrated in each training session on the recovery, overall fitness and the strength that could gain me those vital seconds come race day.

“At the race this year my mindset was to run my own race and to simply run as best as I could on the day. I knew that I could win, but also that it would be a challenge. I went in with the mindset of not getting too demoralised if I was not in the lead or challenging for the lead. I also convinced myself that I did have the ability to win and that I should not be intimidated by the experience of the eight-time winner Elena Nurgalieva.”

“When I was coming back from injury I realised that I would have to be patient and listen to my body. I was eager to get back into running right away – too eager – and I knew that could put me in a position of risking more injury”

With the South African race over such a long distance, the emotions and the physicality of the event can vary immensely, so how did Greenwood’s mindset change throughout the race?

Greenwood, who has a PB of 16:47:19 for 100 miles, explains: “I accepted that I was having a bad race early on as my legs were tight and stiff, but I held on to the fact that I had come so far – both geographically and in injury recovery – that I was not going to quit. Mid-race I had just about accepted that it was not my day but that I would still try to run as best as I possibly could. In the final 10km when I began to get feedback that I was rapidly closing the gap on the Russian, I had to quickly change my mindset back into being super competitive and seizing the moment, as I knew that this might be my only chance to win the Comrades.”

Greenwood, who lives and trains in Vancouver after moving from the 1450m altitude of Banff in the Canadian Rockies two years ago, runs most of the time alone. She says: “The benefits of moving to Vancouver are that the weather is relatively mild for Canada, although we do get snow on the higher trails in the winter while the other trails remain snow-free all-year-round. There is a strong running community in Vancouver and once a week I train with the Vancouver Falcons. Road running routes are endless in the city with lots of paved traffic paths, including the Stanley Park Seawall – the favourite running route in the city. We are at sea level however, so I don’t have the benefits of the altitude that I had in Banff.”

Although most athletes and coaches can relate to the preparation periods and build-up to a half and full marathon, preparing physically and mentally for longer distances is more difficult. Greenwood says: “Physically, it’s all about gradual training, building up the long runs – I ran three 50km runs in training – but not peaking too soon. I also did speed workouts once per week, which I think proved invaluable in the closing speed I ended up needing at the Comrades this year.

“I made sure that I took down weeks every four weeks or so to ensure that the quality in my training was maintained and I didn’t become too worn down by the rigours of training. Mentally though, I have the experience of more than 50 marathons and ultras and this has made me really mentally tough. In a race, if the going gets tough, I always try to remember all the training I have put in and to do that training justice I just need to carry on working for another few hours.”

The annual Comrades Marathon is comparable to the London Marathon in status. However, the distance aside, it is unique in that is run in opposite directions on alternative years. This year it started in Pietermaritzburg to finish on the coast – a downhill route – and next year it changes to a mainly uphill course.

Given the nature of this year’s course, Greenwood reveals: “There was a total of 2000m of descent over the whole 89km. I did a few key downhill sessions to train the quads – in Vancouver we are lucky enough to have a gravel road on which I can run downhill hard for 6km without a break. This sort of training really pays off come race day as the quads can deal with the repeated pounding that they will invariably get.”

“Mentally, I have the experience of more than 50 marathons and ultras and this has made me really mentally tough. In a race, if the going gets tough, I always try to remember all the training I have put in”

Recovery is naturally important after running such colossal distances. She says: “I took a full seven days off and then the following week I just did some easy runs with no pushing of the pace. I also incorporated some cycling for a good workout with zero impact. The downhills are harder on the body, though, so recovery time can be longer than on an ‘up’ year.

“I got a massage a few days after the race to help the muscles recover from both the race and the travel back to Canada via the UK where I stopped off to see my greatest fans – my mum, dad, sister, brother-in-law and niece – the whole family!”

Greenwood continued: “It is very hard to pace the Comrades evenly as there are so many ups and downs and so few flat sections. I had hoped to average around 4:10 per kilometre (ended up 4:15/km) and I kept an eye on my Garmin early on to ensure I was in a sensible range of this. It is very easy to go out too fast and pay for it later on – so it’s really all about holding back in those early miles.”

Although the tough training miles account unequivocally to the outcome in terms of success in such a race as the Comrades, it is sometimes the more trivial things that are taken for granted that ensure that things literally run smoothly.

She points out: “Personally, I don’t feel that a super lightweight shoe is ideal for the Comrades. I wore adidas Adizero Bostons as I like their more rigid feel and they have more than enough protection against the pounding. I also wear Drymax socks, which are quite padded, as I feel that this extra padding can help in the latter miles.”

The Scot has been sponsored for the last six years by Montrail and Mountain Hardwear and this has allowed her to compete successfully on the popular North American trail racing scene. A look at Greenwood’s stats makes for some interesting reading, with some unusual distances listed as her PBs – 56km, 87km and 89km. Nevertheless, this is what it takes to be the one of the best ultra-runners on the planet!