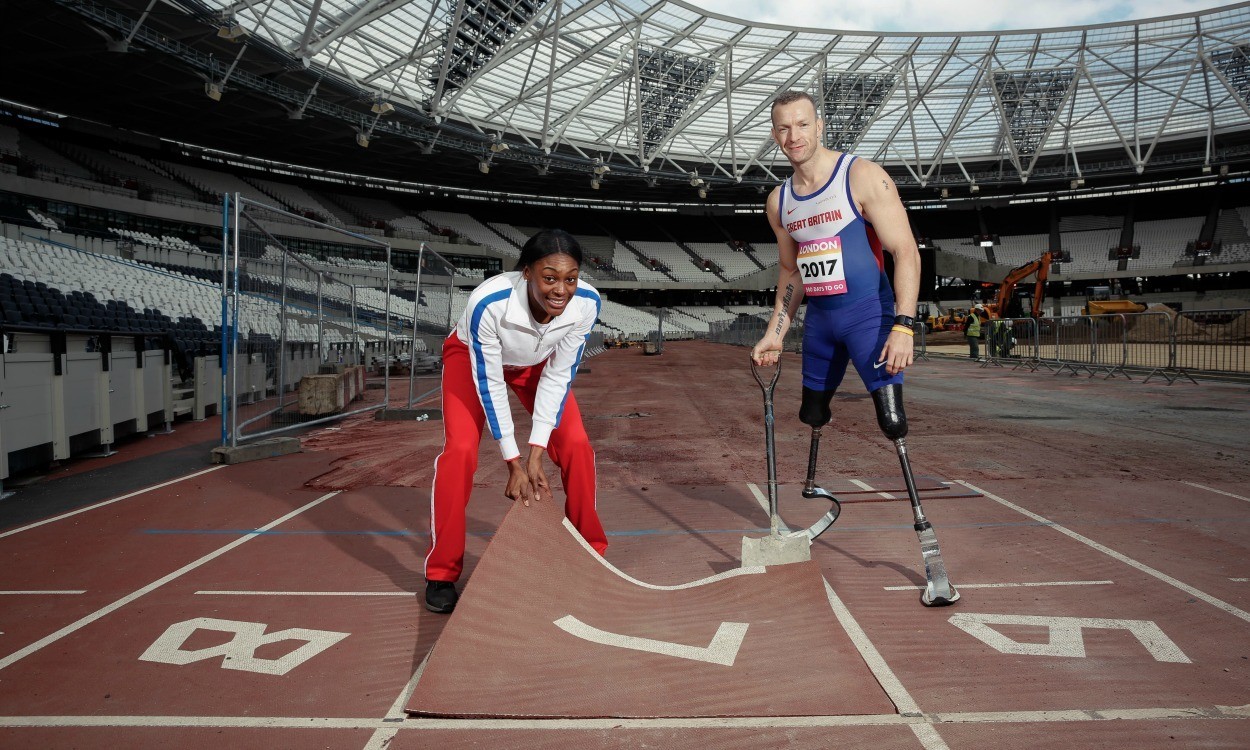 With 500 days to go until London 2017, Perri Shakes-Drayton and Richard Whitehead returned to the Olympic Stadium

London 2012 Olympic hurdler Perri Shakes-Drayton and Paralympic and reigning world champion Richard Whitehead have joined in the first phase of ‘track transformation’ ahead of the 2017 London World Championships.

The London 2012 track is being replaced with a brand new surface, laid in time for the two world championships taking place at the former Olympic Stadium, which begin in 500 days’ time.

Londoner Shakes-Drayton and Whitehead, who won gold over 200m at the Paralympic Games, were invited to remove the final pieces of the Olympic Stadium track including the finish line where athletes such as Usain Bolt, Mo Farah, Jessica Ennis-Hill and David Weir celebrated their victories in 2012.

The new track will be laid in late spring in time for a range of events this summer including the London Anniversary Games in July.

Momentum is building for London 2017 with a number of star athletes showing their support for the event with activity to mark 500 days to go.

Shakes-Drayton, who competed at London 2012 in the 400m hurdles and 4x400m relay, said: “Dreams were made when athletes like Usain Bolt crossed this famous finish line at the Olympics in 2012 and I hope to be creating new memories for Britain at the London 2017 World Championships.

“I feel honoured to be a part of transforming this incredible track in time to make new memories for London 2017. It’s a symbolic and exciting day. The excitement of a major global event coming to London in 500 days’ time is what I’m really looking forward to. London 2017 will create memories which will last a lifetime.”

Whitehead created one of the iconic memories of the Paralympic Games when he won gold in the 200m T42 event in a world record time of 24.38.

Whitehead says London 2017 is set to be his final track race, adding that he cannot imagine a better stage on which to end his career.

He said: “London 2017 will be the greatest occasion for me to end my career. I plan to retire after London 2017 and it will be the best possible way to bow out of the sport. A home world championships, back in the Olympic Stadium, will be incredible. London 2017 will be one of those ‘I was there’ moments and will be huge for Britain and for athletics – able-bodied and Paralympic.”

As well as fans being able to sign up to receive news and ticket updates, London 2017 has opened a priority purchase opportunity for members of the athletics family to buy their tickets first.

More information on ticketing for London 2017 will be announced in April, including timetable, pricing and key on-sale dates. A volunteering programme will also be launched in the coming months.