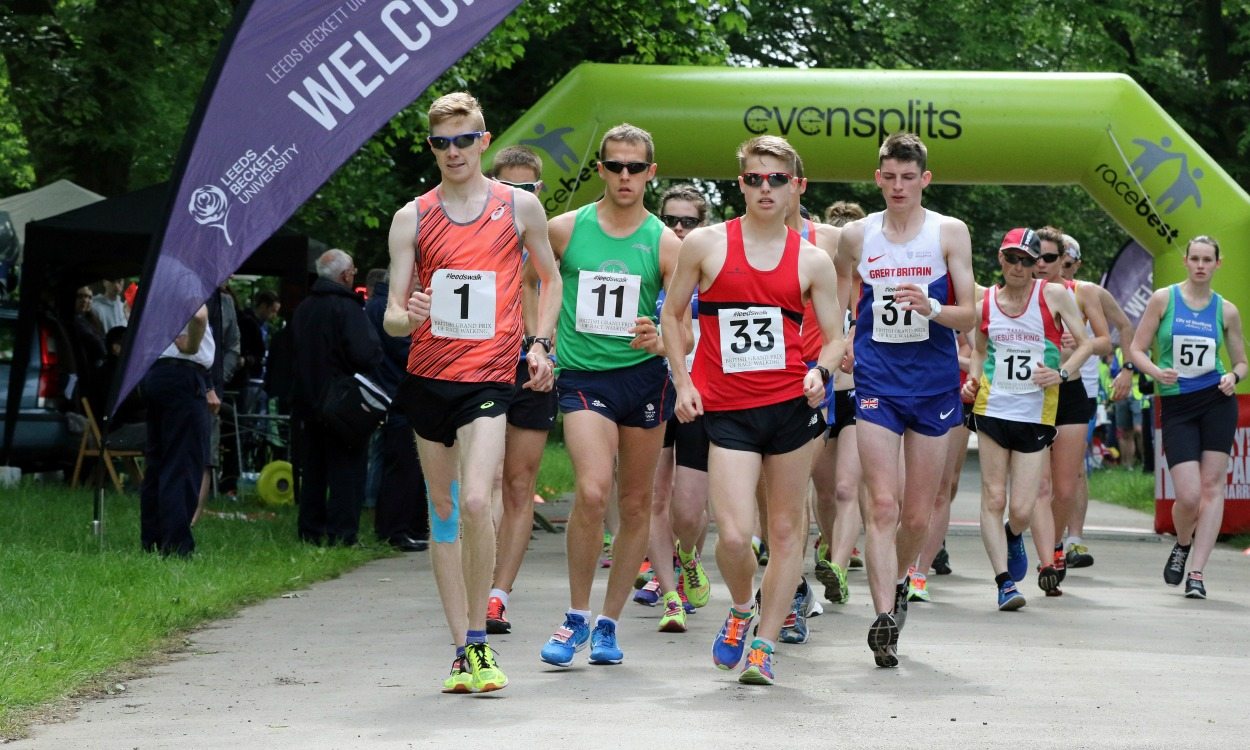 A round-up of the action at the British Grand Prix of Race Walking, which incorporated the British Olympic trials

Tom Bosworth secured his place in the British team for the Rio Olympics with a dominant display on home soil in taking victory in the British Grand Prix of Race Walking which doubled as the British Olympic trials, reports Ian Richards.

With several qualifying performances in the bag already, he cruised to victory in 86:15 as well as taking the England 20km title.

Bosworth led his training partner Cameron Corbishley through 5km in 20:59, as Corbishley chased the World Juniors qualifying time of 42:20. Bosworth moved away over the next 5km, passing halfway in 42:26.

He cruised through the second half in 43:54, enjoying the support of the home crowd through the last few laps as he realised his Olympic dream.

Bosworth said “This was very comfortable today and it was great to qualify for my first Olympics in front of so many family and friends. I would like to thank them and my wider support team for all their support on this journey. Four years ago I was in tears on the roadside in La Coruna after missing out by an agonising 19 seconds.”

Behind Bosworth, Daniel King got the better of a race-long battle with his twin brother Dominic King to clock a season’s best 90:23 to move to second on the UK rankings for 2016, ahead of Dominic who has already secured his qualification for the Olympic 50km and moved to third on the UK rankings with 91:30 as they took the silver and bronze medals in the England Championships.

Bethan Davies moved to second on the UK all-time list with a massive PB and Welsh record of 93:48 but was an agonising 48 seconds short of the UK Olympic qualifying time of 93:00. The time is inside the IAAF qualifying mark of 96:00.

Davies put the disappointment of an early disqualification in last month’s World Team Race Walking Championships in Rome behind her as she put in a massive effort and passed the 5km point in 22:59. The next 5km was passed in 23:26 to give her a halfway clocking of 46:25, spot on pace for the qualifying time.

She slipped off the pace at the 15km point and despite a huge effort in the last 5km was unable to hold the 93:00 qualifying pace.

Despite the disappointment this was a huge personal best by over two minutes.

Davies said: “I am disappointed to have come so close but this is a massive performance after the disappointment of Rome. I did my first ever 20km in training in this park four years ago and I am now half an hour quicker! This shows how far I have come and I will use this as a stepping stone to qualify for London 2017”.

Siu Nga Ching of Hong Kong took second place in 1:40.17 ahead of Davies’ Welsh compatriot Heather Lewis who moved to second on the UK 2016 rankings with 1:40.40 for her third fastest time ever. Hannah Hunter took the England title with 1:54.07 finishing in seventh place overall.

In the junior men’s 10km, Corbishley followed the pace set by Bosworth and he was spot on World Juniors qualifying pace with a 20:59 clocking at halfway, but lost contact with Bosworth during the sixth lap.

He started to slip off the pace and was removed by the judges on the last lap.

Emma Achurch set off in pursuit of the World Juniors standard of 47:00. She passed halfway in 24:02 and hung on in the second half to record 48:09. Sophie Lewis Ward clocked another European Youth qualifier with 24:22.