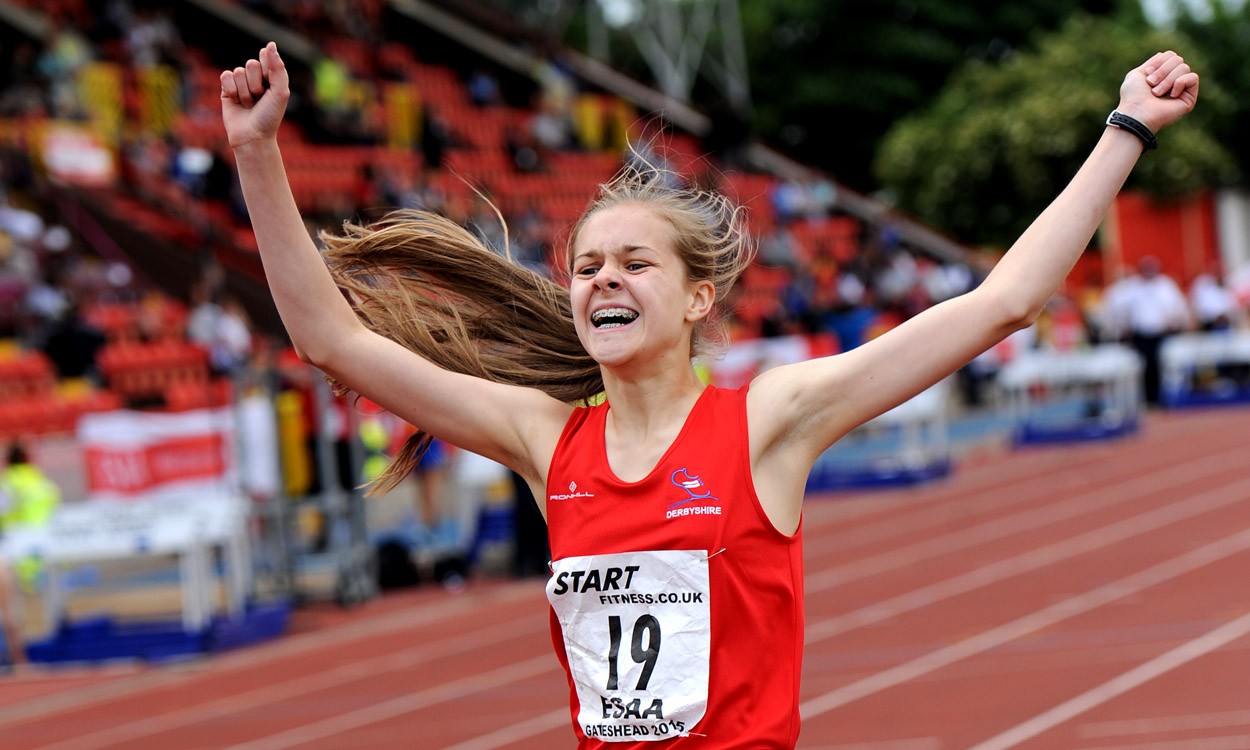 Tilly Simpson produced the standout result in a session of solid performances on the second day of the English Schools Track and Field Championships in Gateshead on Saturday.

The Hallamshire Harrier’s 800m run of 2:06.22 in the junior 800m followed other championship records in the senior girls’ pole vault and intermediate girls’ hammer.

Simpson took exactly a quarter of a second from the UK under-15 best set by Katy-Ann McDonald last year, which in turn had broken a 32-year-old mark.

Running from the front from the gun, Simpson heard the bell at just outside 60 seconds and was well on course to break the championship record.

Finishing five seconds clear of runner-up Molly Canham, she was also well inside her previous best of 2:07.33. Her time beat that of the senior winner, Ellie Baker (2:07.79).

Livvy Connor and Abigail Roberts equalled the championship record with 3.85m in the senior pole vault, although it was the former who came out with gold. Lucy Bryan’s 2012 mark was the target, although the record remains lower than the intermediate girls’ equivalent set Friday.

After Katie Head and Katie Lambert bettered the previous championship record in the intermediate hammer on Friday in qualifying, the athletes were back out on to the outside field for what was expected to be a high-standard final.

Throwing the 3kg implement, 1kg lower than that for seniors, Head, who is coached by her father, former international hammer thrower Paul, advanced the record to 60.05m – down on her PB but enough to beat Olivia Stevenson (59.02m) into second. Lambert finished down in ninth with 51.61m.

Pippa Earley was in flying form in taking the junior girls’ 75m hurdles in 10.90. She went to third on the UK all-time under-15 list – just five hundredths behind the No.1 and championship record-holder Shirin Irving.

The wind conditions weren’t kind for many of the sprint finals, but Charmont Webster-Tape was just three hundredths outside the 15-year-old championship record of  of 11.81 in taking the intermediate girls’ 100m. As she took 0.28 seconds off her PB with a following wind of 0.9m/sec, fast times followed too. Sharhnee Skervin clocked 11.85 and Ebony Carr 11.88 for silver and bronze.

Kyron Canny went alongside Cameron Sprague, running the 200m instead here, at the top of the under-15 100m rankings, clocking 11.10 in the junior boys’ event.

Jona Efoloko was just 0.14 outside the championship record in taking the intermediate boys’ 200m with 21.68.

Ryan Gorman’s expected challenge did not come in the senior 200m as he went to a third consecutive title. He was more than half a second clear with 21.41 – three hundredths down on his semi-final time.  Jordan Broome, who ran 21.37 in the semi-final, pulled up in the final.

Another multiple winner was shot-putter Sophie Merritt, who took her fourth consecutive English Schools’ title. With 13.49m, the five-time shot winner, who was on the discus last year, was quite a bit down on the championship record of Eden Francis.

William Adeyeye, who has previously concentrated more on the hurdles and combined events, added 93cm to his PB in winning the junior boys’ shot with 16.21m, going to the top of the UK under-15 rankings. His 100m and 80m hurdles PBs would have seen him second in those events. His long jump PB is 11cm longer than the 6.22m which won the gold here.

Jessica Keene went to second on the year’s age-group rankings for 3000m when she clocked 9:41.35 in the intermediate girls’ event. Her reward for front-running the whole way was a PB by nearly four seconds.

McDonald, the fastest in Britain this year over 800m, suffered a surprise defeat in the intermediate girls’ event. Isabelle Boffey clocked 2:07.86, Khahisa Mhlanga was second with 2:08.26 and early leader McDonald was third with that same time. McDonald won the 1500m in 2013, but was disqualified in last year’s final.

James Beeks went to the top of the under-17 1500m steeplechase UK rankings with 4:24.07 in winning the intermediate events. In the senior 2000m steeplechase, Michael Bartram clocked a winning 5:55.60.

Chloe Esegbona ran the fastest time of 2015 so far in her age group when she clocked 42.84 to win the intermediate 300m hurdles.

Georgina Rogers had a massive win in the senior girls’ 400m hurdles as she clocked a PB 59.18 – taking more than a second off her PB and going to the top of her UK rankings.

Isabella Wakefield went to the head of the UK rankings as she won the intermediate girls’ 80m hurdles with 11.34.

Daniel Gray was just three hundredths off the UK lead in the senior boys’ 400m with a PB 47.18.

With 35.69, Thomas Evans went to third on the UK under-15 all-time list for the 300m, which has only recently become the standard event.

Patrick Sylla, as expected, won the intermediate boys’ long jump. His winning 7.12m was 21cm down on his PB and UK lead. Lauren Rule took more than half a second off her best to win the girls’ event with 56.10.

Jude Bright-Davies set a UK under-17 lead of 14.24m with his PB in the intermediate boys’ triple jump.

» See the next edition of Athletics Weekly magazine, out July 16, for further coverage including more pictures and results