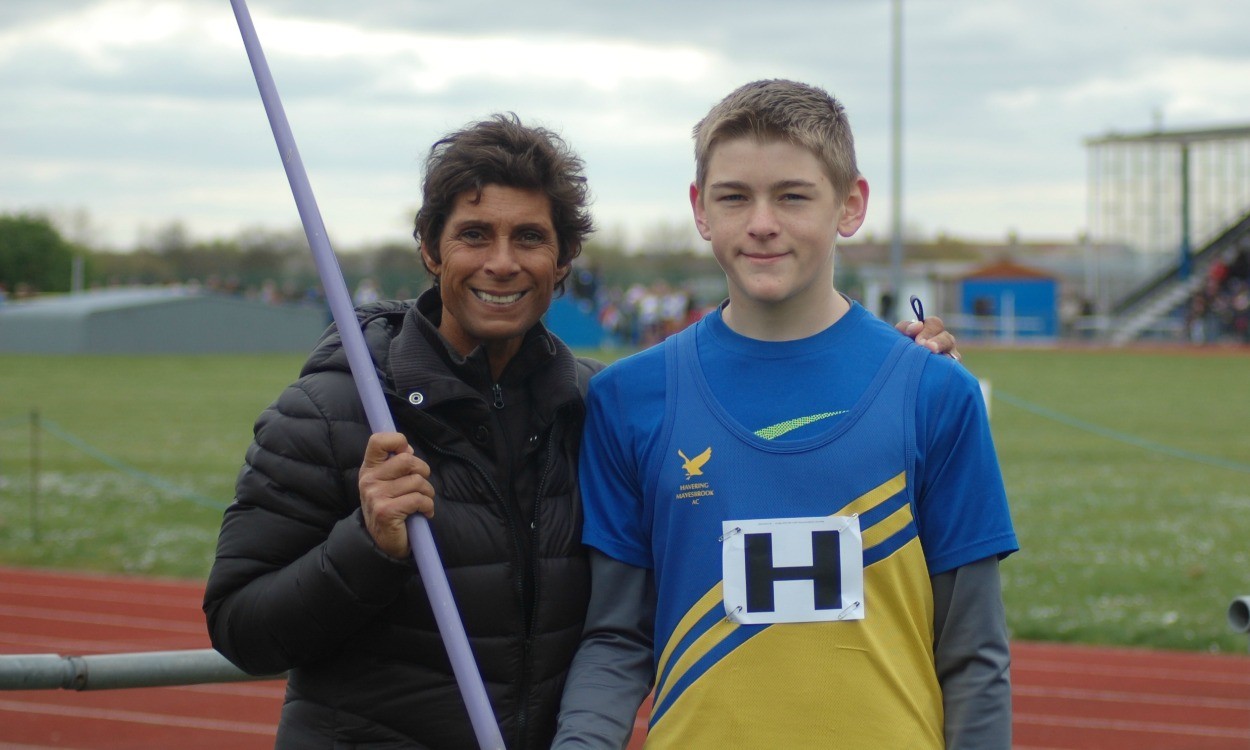 Max Law and his family have an association with the English Schools Track and Field Championships that stretches back 60 years.

In 1955, when the event took place in Manchester, his grandfather, James Colton, competed in the triple jump and won a bronze medal, which can still be seen in Max’s home today.

Decades later and Alex Law, Max’s elder brother, was an under-15 long jump silver medallist at Gateshead in 2011.

Last summer Max (pictured above with Fatima Whitbread) had his own great moment on the podium. And this time the medal was gold after the Romford-born athlete, a first year under-15, scored an emphatic victory with the javelin.

For Max and Alex it was a particularly proud day, for together they carried the banner of Essex Schools in the pre-event parade at Gateshead Stadium.

That Max would one day win such a coveted title came as no surprise to his coach, Sam Harrison, who once said: “I want to train that boy. He’s a natural thrower.”

At Havering Mayesbrook (now just Havering AC) Max had first been spotted training with his brother, but was then too young to take part in league competitions. He was allowed in open events, however, and in his very first won long jump and javelin – at the age of nine! By the time he was old enough to compete in a variety of competitions Max was being looked after by Linda Smith and Brian Kiernan, until they advised him to concentrate on throwing and join Sam Harrison’s squad.

Just what an outstanding athlete-coach combination this is can be gauged from the UK ranking tables. In 2012 Max was the No.1 under-11 with the discus; for 2014, by this time under-13, he headed the lists in both discus and javelin; and in 2015, during his first year in the under-15 age-group, he was once more the leading javelin thrower.

Consider also a performance by Max last September when throwing the 700g javelin for only the second time; he reached 55.00m and this was a world age best by a 13-year-old.

So just how far can Max go? Sam is obviously best able to provide the answer.

“I have coached enough youngsters in my time to know the difference between someone who is going to make it and someone who isn’t,” he insists. “It’s always been clear to me that Max is something special.”

“Our relationship is very much a two-way thing,” adds Sam. “He always asks for feedback and I often ask him what he thinks.

“We use slow-motion video to analyse all technical aspects and he is often first to point out where he has gone wrong. This makes coaching him very easy!”

Sam’s last comment does not mean the physical aspects of training are the proverbial walk in the park for Max. Apart from lifting weights and using a medicine ball, he also undertakes a session called “15 to 1” This involves 15 push-ups, followed by the same number of sit-ups and squats with weights. Fourteen of each follow, then 13 and so on down to one. Plyometrics and hurdle drills, too, are on the schedule he must follow.

It helps that Max is a member of one of the London area’s most progressive clubs. Among his valued training partners is Louise Lockwood, who was ranked sixth among senior women with the javelin last year and won, among other things, the South of England Championships. “She’s a very good technician and gives me useful advice,” he says.

Also able to give tips is, of course, his brother Alex. The 19-year-old is himself an outstanding performer and has won, at the last count and across numerous disciplines, no less than 17 Essex county championships.

A few more years might have to pass before Max overtakes that figure, but he has claimed five county titles so far and one such win, in 2014, saw him break the Essex under-13 discus record which had belonged to Alex.

As for this year, with javelin success his priority, Max aims to again be a winner at the English Schools and to defend the England under-15 crown he also won in 2015. Another target will see him try to get near – or perhaps break – the UK age- group record of 65.87m.

There will be no lack of support locally; he has an Olympic Legacy award from his school in Upminster and has twice been winner of the Havering Junior Male Competitor of the Year.

You can find further performance stats on Max on Power of 10 here.