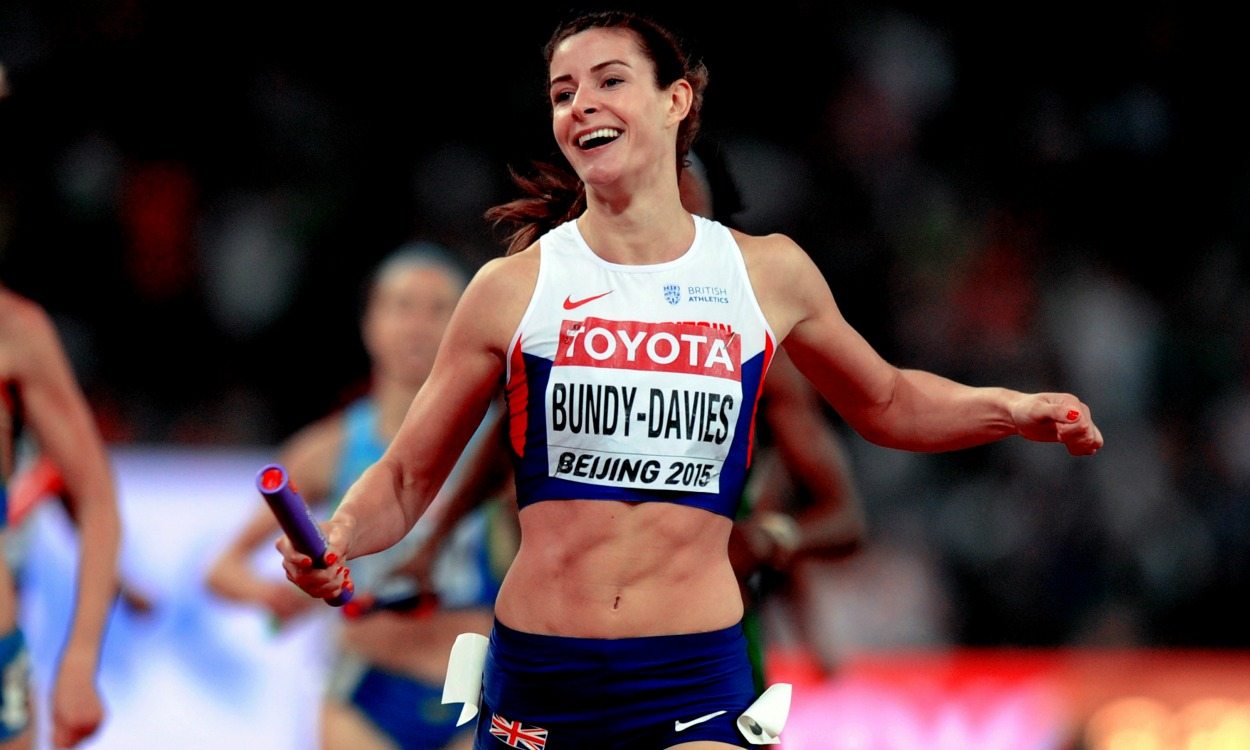 Seren Bundy-Davies is looking to live up to her name, write John Wragg

Seren Bundy-Davies has a star name to live up to as the Welsh name Seren, pronounced “Serr-an”, actually means “star”.

Rio is being selected as her stage for stardom and it would complete an amazing climb from bottom of the bill only four years ago.

We’re talking in Manchester, at a Starbucks not far from the university where she is doing a biomedical science degree. She’s Manchester-born – a Red not Blue, but her parents are Welsh and Wales peppers the conversation about her fledgling 400m career.

“Star. That’s something to live up to isn’t it?” she says. “It’s a really nice name. I have three brothers and I think my mum and dad were waiting for a girl. There’s Reece, 25, Owen, 24 and my twin brother Lewis.

“Maybe it was a relief when they found out one was a girl! I’ve never met another Seren, probably because I’m not in Wales.”

But Seren’s making a name for herself. She has no background in athletics. Her dad Rob, says his mum could run a bit, but Seren was 17 before she ran fourth in the English Schools and coach Steve Ball took an interest.

Since then medals have come quicker than titles used to be won by Manchester United – five in the space of five months last year.

“I’ve always compared myself to my brothers, playing football with my twin. I was surprised when I ran 51.72 indoors in Birmingham. I was still a bit naive. I would say ‘Is that good?’ I didn’t really know what that equated to, didn’t know the significance of it. That was the big surprise to me when I ran that 51. I don’t think anyone would look at me and think I’d be particularly fast indoors because I’m quite lanky.

“I was over the moon and, obviously, the European Indoors, we had to go for it. It was the biggest opportunity I have ever had and Steve said, ‘You’ve got to go for it. You’ve got a real medal chance.’

“So it was just one thing after another last year. I didn’t really rest.”

She ran a personal best of 51.48 at the Anniversary Games in London last July and has since improved that mark to 51.26 in Geneva this month – a long, long way from the 55.88 she ran at the English Schools.

“It was just one thing after another last year. I didn’t really rest”

“Then when I went to high school I did hockey and I got into running. The PE teacher said to me to do the regional sports championship and then I qualified for English Schools. Running the 300m, that was my first ever athletics. I was 16. But I didn’t even get out of the heats so I was no superstar.

“It was just chance I found the coach I’m with now. Someone who was training at Macclesfield, he wanted to do the 400m so he did a bit of research and said there is a really good coach at Trafford who specialises in the 400m and he’s had some international athletes.

“I was only 17 so I was a bit shy. Steve looked at my profile and said it would be great if I could come down. It took me a few weeks but I went down and from the first session there I’ve never looked back.

“Me and my dad had looked at coaching a bit but it’s really very niche if you don’t know who is good. We had no athletics background so we didn’t know who was a decent coach or what a decent time was, so we were oblivious to it all. We didn’t know where to start.

“I wrote to quite a lot of universities – Newcastle, Cardiff, Birmingham – I wanted to carry on with athletics. But then when I found Steve I thought I’ll definitely stay in Manchester. So a pretty easy decision in the end. I joined him just before my 18th birthday.

“The first year I got an injury, which stopped me going to the European Juniors so that’s why it looks as though I’ve come a long way very quickly. That year I ran a big PB, but not amazing national-wise, still no one really noticed me.”

He has UK champions, European and world bronze medallists, the world and European masters champion and masters world record-holders in his training group. He’s not on British Athletics payroll or part of its coaching set-up but has done it for love since 1995.

Ohuruogu was a 4x400m team mate when Bundy-Davies anchored GB to the biggest medal of her life so far, world bronze.

“Christine is such a good role model, it’s really positive that you’ve got someone to look up to,” she says. “When someone like that is on the team with you it makes you think that maybe you can get to that level too.

With the Rio Olympic qualifying time safely by her name, a top two at the trials is her immediate target.

“I’d be really disappointed if I didn’t qualify individually for Rio,” she says.

“It was hard for me to watch because I think 51.4 would have got me through to the semi-finals at the Worlds and I would have hoped to have run fast on that track. But when I look back I was so tired after such a long season it probably was the right decision. Staying injury-free is the most important thing at this point.

“I really want to make the individual, though. The relay is great but it’s not the same as the individual. We really enjoy the relay and want a medal, but we train for the individual event. I think I’m in PB shape and I think I can finish in the top two at
the trials.”

Another of her targets is the Commonwealth Games of 2018. She’ll run for Wales, of course.

“People ask ‘How come you chose to run for Wales?’ When you are from a Welsh family there is no choice. All my mum’s family still live in Wales. My mum and dad definitely identify as Welsh, especially when the rugby’s on. I don’t think I had a choice.

“I see myself as a Welsh even though I’ve been brought up near Manchester. If your mum and dad were Jamaican and you were brought up in England you would probably still think of yourself as Jamaican, wouldn’t you?

“So I think it’s similar to that. Definitely Welsh. Commonwealth Games? It’s Wales. That will be my first Commonwealths. I was just off qualifying in 2014.

“Hopefully we can get a decent 4×4 by then. We’ve always got young Welsh athletes coming through .

“It’s really good when I get young Serens tweeting me. They are all saying you are my inspiration. There are not many famous Serens, are there?”