The rise of Faith Kipyegon 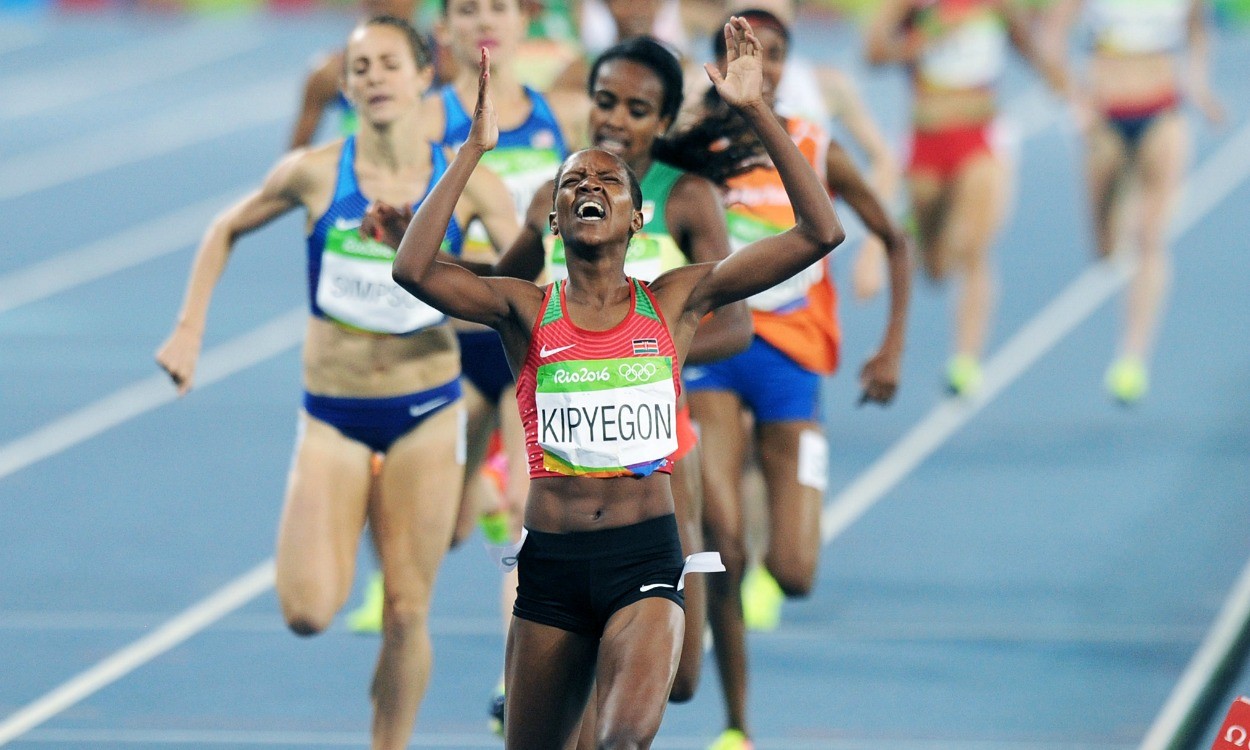 The Kenyan has risen to the ranks of Olympic champion over 1500m, but she and her coach believe she can go further up in distance, writes Steven Mills

As soon as the long-striding Faith Kipyegon won the junior race at the 2011 World Cross Country Championships barefoot in Punta Umbria, the Kenyan was widely tipped for senior stardom on the track.

Kipyegon’s profile continued to rise as she quickly added to her title haul by winning the world youth and world junior 1500m titles in back-to-back years, and a fast time to win the world junior title in Barcelona was followed by a surprise call-up to represent Kenya at the London Olympics.

“London was my first experience with the Olympic Games,” remembers Kipyegon, who embraced – and enjoyed – her time in London 2012 even though she was eliminated in the heats despite leading at the bell. “I liked it and enjoyed it a lot. It also was different from other races as I came from junior to senior. It was my first big race competing with seniors.”

Kipyegon cites Vivian Cheruiyot as her role model and their early career paths followed similar trajectories with precocious results at junior level acting as a precursor to an Olympic debut in their teens. But while it took Cheruiyot four tries – and 16 years after her Olympic debut – to claim that missing Olympic gold medal, Kipyegon claimed the 1500m title last summer at the end of her first full Olympic cycle.

In one of the strongest events on the track programme, Kipyegon matched world record-holder Genzebe Dibaba’s trademark mid-race break in the 1500m final before pulling away from the Ethiopian on the last lap to reverse the outcome of the 2015 World Championships in Beijing. Kipyegon became just the second Kenyan winner of the title in Olympic history, and the achievement was thoroughly toasted back home.

“After Rio I stayed in Europe for a few races before flying home to Kenya, but back in Kenya I had many celebrations,” said Kipyegon. “There was a homecoming party in the camp with other athletes, my family and people from the country. It was a big party and we always celebrate with eating, singing, praying and saying thank you to God.”

“For the track season my main goal is the World Championships, that will be the main target for 2017” – Kipyegon

Kipyegon surprised herself when she lowered her best ever time from 4:03.82 to 3:56.98 to make her breakthrough at the start of 2013, but while her prowess and potential were unmistakable, the Kenyan was sometimes erratic during her first two racing seasons on the world stage. She was only fifth at the 2013 World Championships in Moscow, although she did win the Commonwealth title in 2014.

The figure who has played more than a small role in her career development over the last 18 months is the former European 800m champion-turned-pacemaker par excellence Bram Som, who joined forces with Kipyegon in 2015.

“We started working together at the beginning of 2015. I was impressed by her professional attitude and her dedication; I have not seen it that much with African athletes,” said Som on his initial impressions. “And of course, physically she is a small wonder. She adapts to sessions extremely quickly and recovers much faster than an average athlete.”

Som made some sizeable changes to Kipyegon’s training by introducing more quality sessions to her schedule in place of slower workouts as well as incorporating some gym work – namely core stability and strength training – into the programme. The overall training volume has been streamlined, but both of them remain staunch believers in the virtues of cross country as a means to developing an endurance base for the track season.

“Faith loves and enjoys running cross country; that is a very important aspect,” he said. “Also cross country is a perfect way to do some quality mileage in the winter and not get stuck with too many slow long runs. It’s a completely different system you load, which is very important for the last 800m of her 1500m.”

It was at cross country in which Kipyegon made her first steps internationally by finishing fourth in the junior race at the 2010 World Cross Country Championships before winning the title in 2011 and 2013. Kipyegon would have started as the favourite for the senior title in 2015 if injury didn’t intervene but the 23-year-old could have another tilt at that title in Kampala, Uganda, in March.

“I would like to try to qualify for the World Cross. I know it’s 10km, but I will try my best. For the track season my main goal is the World Championships, that will be the main target for 2017,” said Kipyegon.

“Faith’s physical talent stretches from speed – 1:57 over 800m – up to 10km. And who knows, even further? Maybe you can compare her with Eliud Kipchoge” – Som

Kipyegon has excelled across the middle-distance spectrum and her repertoire includes a 1:58.02 lifetime best for 800m and a 14:31.95 lifetime best for 5000m set on her debut in Eugene in 2015. Som is steadfast in his belief that Kipyegon will be just as good over 5000m one day but having only followed his training programme for one season, Som believes Kipyegon, who has only improved her lifetime best by 0.57 under his guidance, still has lots more potential to be unlocked in the 1500m.

Kipyegon’s endurance is such that Som believes her talents could extend beyond the 5000m – and perhaps even up to the marathon.

“Faith’s physical talent stretches from speed – 1:57 over 800m – up to 10km. And who knows, even further? Maybe you can compare her with Eliud Kipchoge,” said Som, referring to the Olympic marathon champion who ran 3:50 for the mile as a teenager – and is incidentally part of the same management group as Kipyegon.

Kipchoge has performed at the highest level – and over a range of distances and surfaces – since 2003 and her team is applying a similar long-term strategy to her career development. It will be years – perhaps even a decade – until Kipyegon will seriously entertain the idea, but the athlete agrees there is no ceiling to her range. “I think Bram is right, I also think I can run a marathon in the future,” she said modestly.

But for the foreseeable future, Kipyegon will be looking to rack up the medal haul on the track – first at 1500m and then over 5000m.

» The original version of this feature was first published in the November 17, 2016, edition of AW magazine