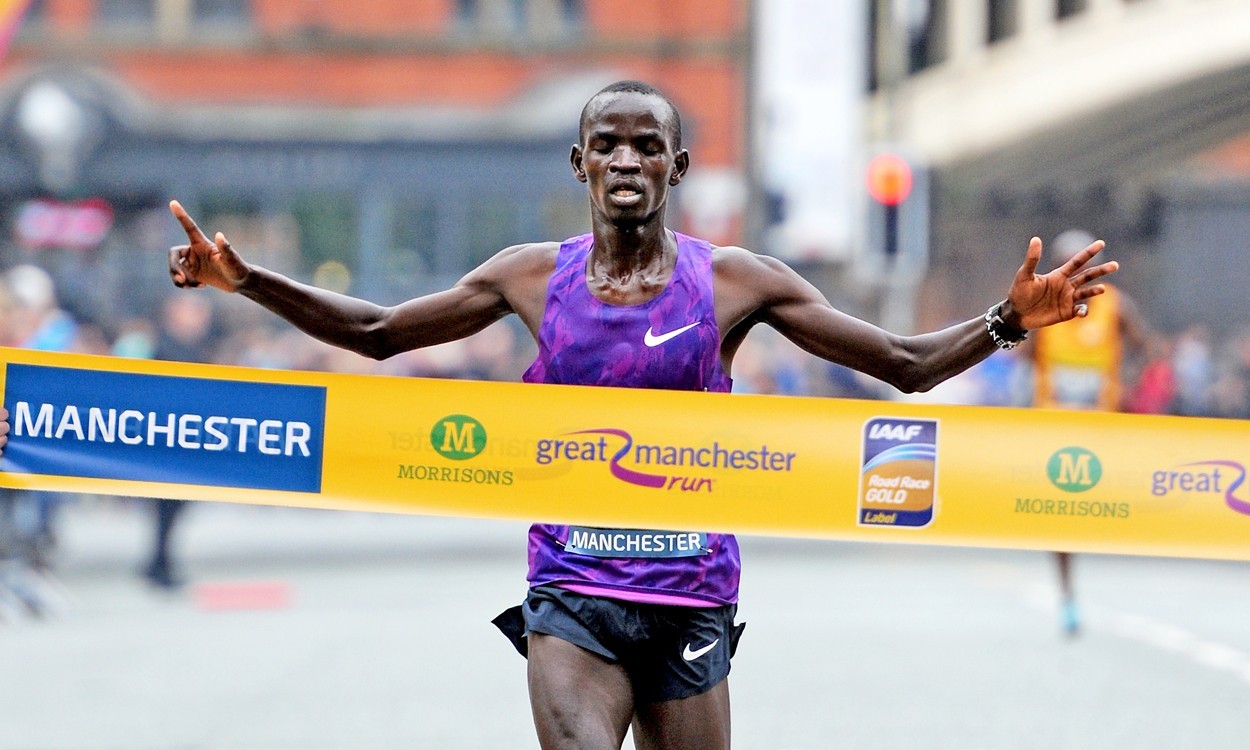 A Kenyan double was secured by Stephen Sambu and Betsy Saina at the Morrisons Great Manchester Run on Sunday, with Sambu running the third quickest ever winning time on the 10km course and Saina holding off a strong-finishing Gemma Steel for elite women’s race victory.

Sambu won a battle of the Stephens as he clocked a 27:30 world lead to finish eight seconds ahead of Stephen Mokoka, who in claiming the runner up spot in 27:38 for the second-quickest time so far this year broke the almost 35-year-old South African 10km record by 22 seconds.

Just behind them, USA’s Bernard Lagat had the biggest smile of the top three finishers as he crossed the line in 27:48 to break Haile Gebrselassie’s over-40s masters world record by 12 seconds.

The trio had been to the fore throughout along with the likes of former marathon world record-holder Wilson Kipsang and his fellow Kenyan Leonard Komon. The lead group went through half way in 13:51 and as Sambu and Mokoka began to push the pace Lagat held on to his third place position ahead of Kipsang, who two weeks earlier had finished as runner up to Eliud Kipchoge in the Virgin Money London Marathon.

Sambu looked comfortable pulling away in the closing stages to claim a clear victory in a time just six seconds off the course record. Behind the top three Kipsang clocked 27:53, Komon 28:19 and Ethiopia’s Tesfaalem Mehari 28:24.

Andrew Butchart was the top Brit in seventh, clocking a 29:09 PB to just pip Ross Millington with 29:11. Jonathan Taylor and Ireland’s Mark Christie completed the top 10 with respective times of 29:19 and 29:20.

Gebrselassie, who has won this event five times in the past, finished 16th in 30:05.

Earlier on in the women’s race and Saina had made her intentions clear from the start, leading early on alongside her fellow Kenyan Caroline Kilel, the 2011 Boston Marathon winner who finished sixth in this year’s event three weeks ago.

By the time the leaders passed the 4km mark and went past Manchester United FC’s Old Trafford, Steel had moved into second place behind Saina and was followed by Kenya’s world marathon champion Edna Kiplagat, who had finished 11th in this year’s London Marathon, with Kilel further behind.

That’s how those positions remained, though European cross-country champion Steel did close the gap on the leader and a strong finish saw her cross the line just six seconds behind Saina – 31:49 to 31:55. Kiplagat clocked 31:57 and Kilel 32:18. Diane Nukuri was fifth in 32:27 and Jelena Prokopcuka sixth with 32:33, one place ahead of Ireland’s Fionnuala Britton who ran 32:56. 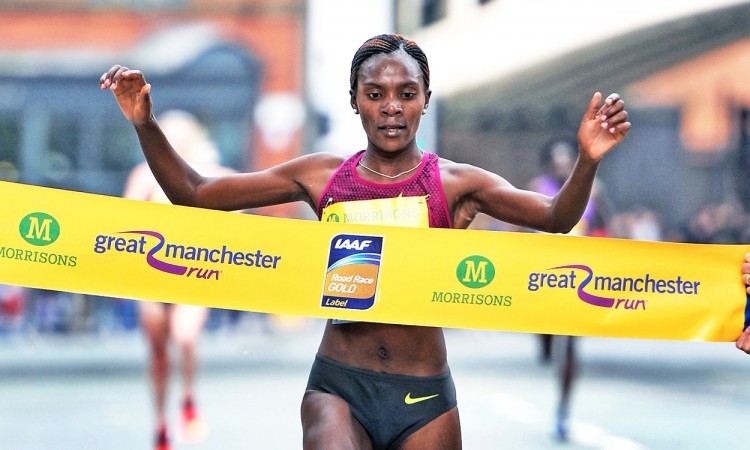 Ethiopia’s Olympic marathon champion Tiki Gelana clocked 33:12 in eighth as Britons Jess Coulson and Jo Pavey also finished in the top 10 with respective times of 33:15 and 33:21.

“It’s my first time here. I just wanted to win the race today, that was my goal,” Saina told the BBC.

Steel commented: “My coach told me to conserve energy through 5km and I think I did that – just damage limitation in the wind.

“I know Betsy likes to front run so I thought let her go and see what I can do at the end. It was good to be so close to her at the end.”

European 10,000m champion Pavey, who has won the Great Manchester Run twice before, admitted she was disappointed with her time but with it being her first race of the year and her first major road race since 2012, the 41-year-old says she is looking forward to using it as a mark to build on.

“I’ve got to be realistic, I’d had a bit of disruption with illness over the past few weeks,” Pavey told the BBC. “But not making any excuses, I was just pleased to be out there and racing again.

“Obviously I’m a bit disappointed, I would have liked to have run better than that. I’m just pleased to get started. I think that will do me a lot of good and hopefully I can build on that now.”

Running further back, GB masters athlete Angela Copson was successful in her world record attempt as the 68-year-old smashed the W65 10km mark with a time of 40:30.

David Weir, the six-time Paralympic gold medallist, continued his winning ways at the event and clocked 20:57 for victory, while Shelly Woods clocked 25:37 to win the women’s wheelchair race.

» See the May 14 edition of AW magazine for much more in-depth coverage including reports, results and pictures from the Great Manchester Run and Great CityGames