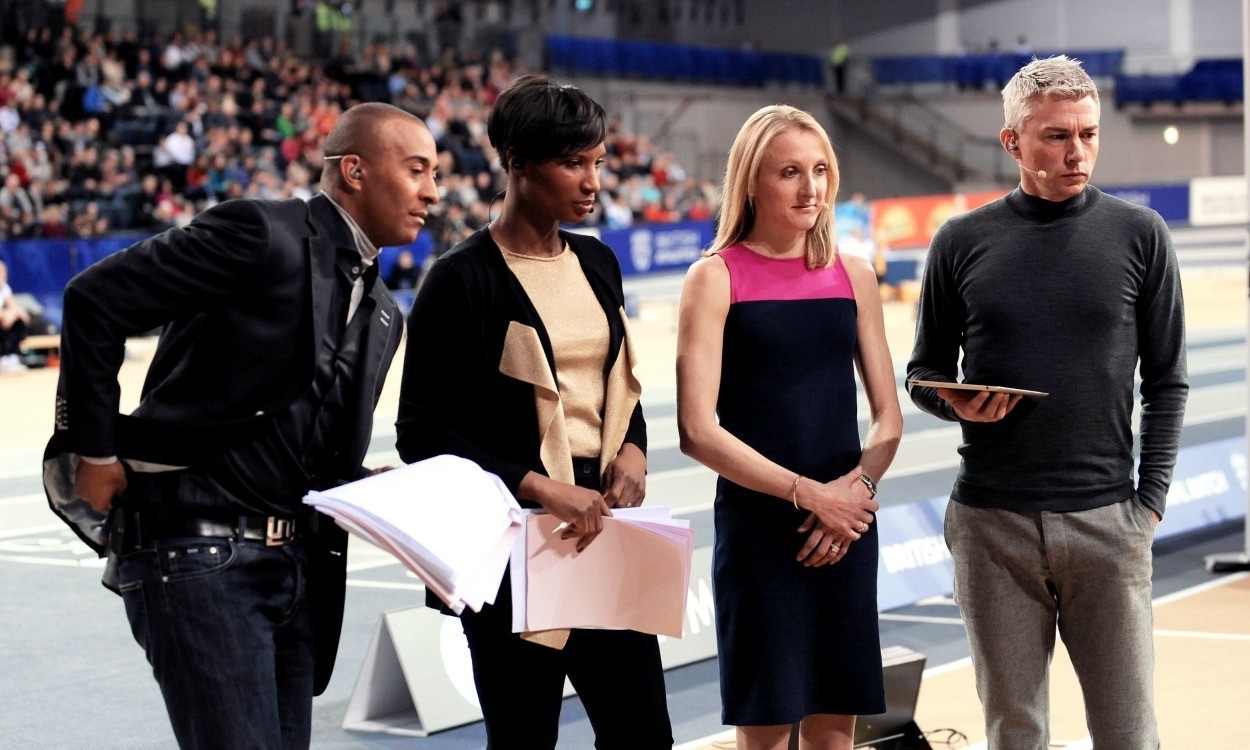 Coverage of athletics on the BBC is traditionally one of the most popular, if not the No.1, topic in Athletics Weekly’s mailbag.

The station has covered the sport consistently and thoroughly for many years but its recent style of presentation has polarised viewers. Many enjoy and appreciate the BBC’s efforts, but there are also critics who get frustrated with time devoted to studio discussions as opposed to showing more actual action from the track and, especially, the field – the latter being an area that some feel is neglected.

In what is probably a long-overdue interview, the BBC’s Philip Bernie happily answered some of these gripes and spoke generally about the BBC’s coverage policy and why the station has such a long-time commitment to covering athletics.

In his position Bernie is responsible for all of the output and his team oversees all major sports events including the Olympics, Commonwealth Games, Winter Olympics and FIFA World Cup.

He joined the BBC in 1984 – so his involvement with the channel dates back to the era of David Coleman and Ron Pickering – and key roles over the years include editing Match of the Day, Sports Personality of the Year, Wimbledon and coverage of the Olympics and Commonwealth Games.

Athletics Weekly: The thing that sparked this interview was the BBC’s decision not to cover last month’s annual international indoor match in Glasgow. I think the BBC has covered it for about 25 years and indeed longer if you include the equivalent fixtures at Cosford in the 1980s. Was there any great reason for this?

Philip Bernie: It’s about prioritising and plunging our resources into doing the best we can do – and that’s the same when it comes to covering any sport. Glasgow was fine as an event but certainly didn’t match up to the Birmingham Grand Prix and we felt it was better to concentrate on that and also the European and World Indoors alternating rather than spreading ourselves rather thinner. UKA worked really hard with inventive ways to make it better, but we felt it didn’t work to the level that we ideally wanted. So it was really just down to us prioritising what we felt is the biggest indoor event in the UK.

AW: And nothing lasts forever.

PB: Exactly. Our commitment to athletics is enormous and rightly so. It’s a fantastic sport. We’re really proud to be the home of athletics in the UK. We have a long-term deal with UKA up to 2020 and our Olympics deal goes to then as well and the World Championships through to London 2017. So there’s a massive commitment but rightly so as it’s a key sport and the most important Olympic sport and we want to maintain that (coverage). But like everything we need to be sensible about where we’re focusing our efforts and where we’re delivering best.

“Our commitment to athletics is enormous and rightly so. It’s a fantastic sport. We’re really proud to be the home of athletics in the UK”

AW: The BBC has a very long tradition of covering athletics. Why is there this love affair between the BBC and the sport?

PB: One of the things that makes it so interesting is that it’s a whole series of sports within a sport. There is a variety of disciplines and athletes, male and female. I also look at athletics in racing terms – there’s nothing more basic, clear and accessible as men or women going to the start line and trying to run faster than each other. We have a range of sports (at the BBC) and we love covering them all, but athletics is simple and there’s nothing more startlingly attractive and explosive than, for example, the 100m. In less than 10 seconds you have so much drama condensed into an incredibly short period of time. Then at the other end of the spectrum we have things like the magnificence of Mo Farah winning the distance double in London. And then there’s Jess in the heptathlon with a whole range of events.

Essentially it’s the purity and simplicity and accessibility of it and the thrill of athletes competing head to head on the track or in the field. It makes it a wonderful event to cover. When you get stars such as the ones I’ve just mentioned and British names succeeding so well, the nation gets behind them and this was particularly the case in the London Olympics, although I’m sure it’ll be similar in Beijing this year and Rio next year.

AW: You mention the simplicity of the sport and who can get from A to B the fastest or throw or jump the furthest or highest, but isn’t athletics also a very complex and challenging sport to cover with often several events unfolding at the same time in the stadium?

PB: Yes, it’s definitely one of the more complicated sports when we’re host-broadcasting ourselves due to field and track events going on simultaneously. More talented people than me in my team do this and I think they do it brilliantly and effectively as they try their best to balance the races on the track with often more than one field event going on at the same time. We need a lot of resources to do this, but I don’t really expect viewers to wonder how difficult it is to cover. Our job is to make it not look difficult and to look accessible and easy to understand, to cover all the events, get the results right and to deliver the stories in the best way that we can. We have a terrific team in athletics who do that very effectively.

AW: One of the more popular complaints that I hear relates to the balance between studio “chat”, as people call it, and the actual coverage. Athletics fans get particularly annoyed when pundits are talking and yet we can see events unfolding over their shoulders in the background, for example, which can be frustrating.

PB: Our policy is to show as much action as possible. If you have a sport that you’re covering, you want to show the best of the action as widely as possible – let’s be clear about that – and that will always take priority over any studio chat. That’s just a fact and all our teams know that and I believe they fulfil that. It’s about making sure you capture every top piece of action the best as you can as quickly as possible, obviously with the intention of it being live – and pretty much everything (we show) is live.

Any studio conversation or analysis is just to add context to the event and that is always saved until an appropriate moment where there is a gap in the proceedings. Of course, with field events there is action going on all the time but we would never want to miss a key moment of any field event or any race on the track. I understand some people want to see every bit of action the whole time and don’t want to hear from the studio at all, but we’re trying to broadcast to wide audiences for our big events and not all of those people are athletics aficionados.

One of the great things about the BBC is that it brings in a wider audience to all sports, including athletics. So what we’re trying to do is give some interpretation as to why people have done what they’ve done or not done what they’ve done – this is part of what we do but it has to be timed well so it doesn’t interrupt the key, prime element, which is to show the action.

AW: Some feel not enough coverage is given to field events.

PB: There are obviously lots of events in athletics and some field events take place at the same time as each other. We have to judge how we go from one to another, especially if they are happening at the same time as track races too. It really depends on the personalities involved and interest levels to be honest.

I imagine subscribers to Athletics Weekly are going to be interested in every single athlete competing, but we have a wider audience (at the BBC) who are clearly interested in some events and some athletes more than others, often simply because they’re British and pinpointing where the big British interest is in an event dictates a lot of our coverage.

We do try to get the balance right. We do absolutely want to show as much of the field events as possible. Field events by definition are more complex than any track race where you just race at a given time and finish it. Field events are a succession of throws or jumps where there are gaps in between and they often happen simultaneously, so it’s more fiddly sometimes but, particularly where there is British interest, we’d always want to show the best of the field events and I think our teams do pretty well at that.