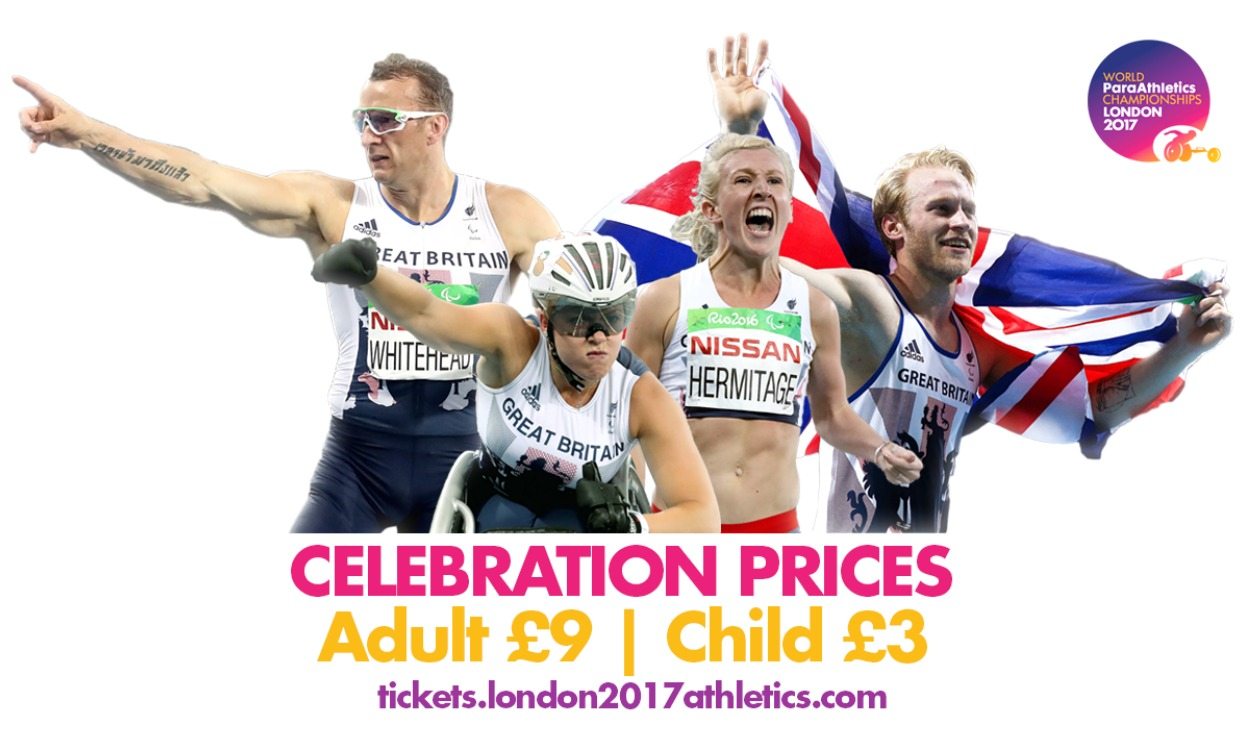 The team in Brazil achieved a 33-strong medal haul, beating the London 2012 medal count of 29.

Fans can secure children’s tickets for just £3 in honour of Hannah Cockroft and her three gold medals in the T34 100m, 400m and 800m in Rio. The ‘Cockroft ticket’ is available across all sessions of the World ParaAthletics Championships, which take place July 14-23  next year.

In addition, adult tickets for any session can be purchased for £9 in recognition of the nine world records set by British athletes at the Games, including Cockroft’s T34 400m record of 58.78.

The Cockroft and world record special tickets join those in place for the IAAF World Championships honouring Colin Jackson, Jonathan Edwards, Sally Gunnell and Usain Bolt. They will be available for purchasers until the end of the current World ParaAthletics Championships sale window, which closes on Friday September 30, 2016. Tickets are available to buy now at tickets.london2017athletics.com.

Next summer will bring together 3300 world-class athletes from more than 200 countries, who will compete in 30 sessions across 20 jam-packed and action-fuelled days as both the World ParaAthletics Championships and the IAAF World Championships are hosted by the same city in the same summer for the first time.

Next year’s Championships are gearing up to be the last chance to see athletes such as Richard Whitehead compete, and will also allow the nation to see a host of new Paralympic champions including Jo Butterfield, Libby Clegg, Kadeena Cox, Sophie Hahn, Georgie Hermitage and Paul Blake in global athletics action.

“I am so happy that my Rio performances have been honoured with their own ticket for London 2017,” said Cockroft.

“It was an amazing performance from the entire team out there and I am so proud to have won medals for my country. It’s so exciting that my ticket will enable more children to come and attend the World ParaAthletics Championships next year.

“When I was young I was inspired into taking up sport when I saw a team of wheelchair basketballers in action at my school. If a young person attends London 2017 and takes away that inspiration on to a life of sport I’d be so proud, it would be amazing to think I’d played a part in opening their minds, the way mine was that day at school.

“I was so fortunate to compete in London in 2012 and I cannot wait to get back to the stadium, which holds so many great memories for me. I’m really happy that so many of my team mates will get to experience competing in front of a home crowd. It is going to be a truly special occasion and I hope as many people come out to support us as possible.”